Hillary Clinton is in California as her battle with Bernie Sanders for the Democratic nomination for the United States presidency nears its end. 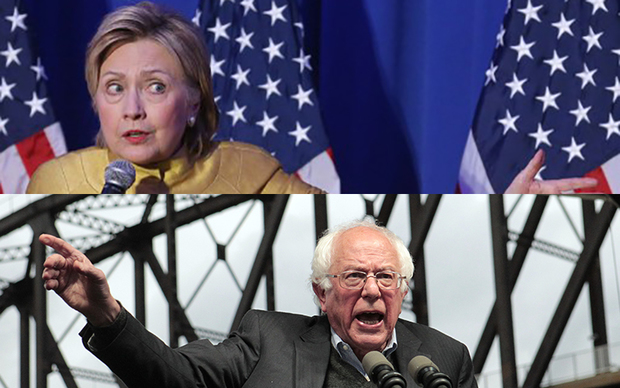 Hillary Clinton is ahead of Bernie Sanders in all the major results, but Sanders is refusing to back down. Photo: AFP

Both Mrs Clinton and Mr Sanders campaigned across California, stopping in immigrant communities, big cities and the agricultural heartland on the final weekend before Tuesday's primary in the nation's biggest state.

She also targeted Mr Sanders for his vote against a 2007 comprehensive immigration reform bill.

Hillary Clinton is expected to sew up the party nomination on Wednesday, when California is one of six states holding nominating contests.

She needs a win in heavily Democratic California to begin unifying her party.

But Mr Sanders has invested heavily in California, where a win could pressure the party to adopt some of the populist policies that have driven his campaign.

Polls showed Mr Sanders had chipped away at Clinton's lead in the state, where Mrs Clinton and her husband, former President Bill Clinton, had built a vast network of supporters including increasingly powerful Hispanic voters.

Recent tracking polls showed Mrs Clinton having a 2 to 10 percentage point lead over Sanders in California.

At a town hall in Los Angeles, Mr Sanders promised to fight for comprehensive immigration reform and said that trade deals, over which he and Mrs Clinton had frequently sparred, funnelled "cheap corn" into Mexico and were driving small family farmers off their land.

Mrs Clinton, with 2312 delegates, needs 71 more to reach the required 2383 for the Democratic nomination.

Mr Sanders has 1545 delegates. California, the country's most populous state, has 548 delegates who will be awarded proportionately to the popular vote.

Mrs Clinton also attacked Mr Trump on immigration at a rally in Oxnard, a city of about 200,000 located northwest of Los Angeles that is almost 75 percent Hispanic.

Mr Trump on Friday escalated his attacks on US District Judge Gonzalo Curiel, who is presiding over a lawsuit involving fraud at a failed Trump business, Trump University.

This is not just another outlandish insulting comment from Donald Trump and it is not normal politics, this is something much, much more dangerous," Mrs Clinton said.

The New York billionaire businessman has vowed to build a wall on the U.S.-Mexico border and deport millions of undocumented immigrants.