Republican nominee Donald Trump has backed out of an offer to debate Democratic candidate Bernie Sanders. 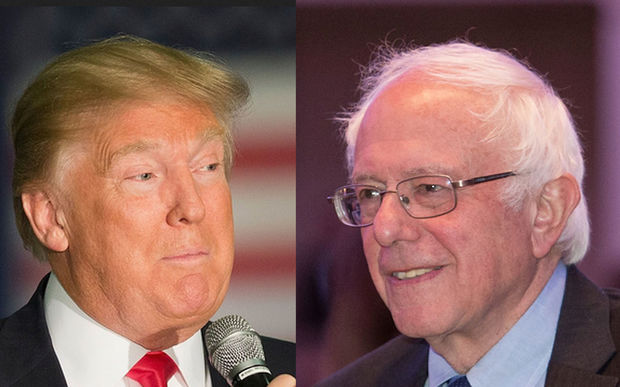 Trump vs Sanders debate is off the table. Photo: AFP

Mr Trump had said he was willing to debate Mr Sanders but his campaign later said it would be "inappropriate" because Hillary Clinton is poised to win the Democratic nomination.

Mr Sanders' campaign had said it was willing to participate in a debate with the billionaire businessman, who just cinched the Republican nomination.

The debates would have included contributions to charity.

The Sanders campaign said it would "look forward to a substantive debate that will contrast the very different visions that Senator Sanders and Mr Trump have for the future of our country".

Mr Trump had joked that he was willing to debate Mr Sanders during an appearance on the NBC's Jimmy Kimmel! Live!

"As much as I want to debate Bernie Sanders - and it would be an easy payday - I will wait to debate the first place finisher in the Democratic Party, probably Crooked Hillary Clinton, or whoever it may be," the Trump campaign said in a statement.

Mr Sanders told reporters on the campaign trail on Friday that he hopes Mr Trump changes his mind.

"Well Mr Trump, what are you afraid of?" he said, calling him a "bully".

He has taken to calling Mr Sanders "Crazy Bernie" in the past few weeks.

And in his first major speech on energy policy Mr Trump said he will "cancel" the Paris climate deal, and said it was bad for American businesses.

He has said there is no evidence humans are responsible for climate change, and is now calling for more oil drilling, fewer regulations and the approval of an oil pipeline from Canada.

Mr Trump said any regulation he deemed unnecessary, bad for workers or contrary to the national interest, will be scrapped.

It's been calculated Mr Trump has now secured the support of enough Republican delegates to win the party's nomination for the presidency in July.