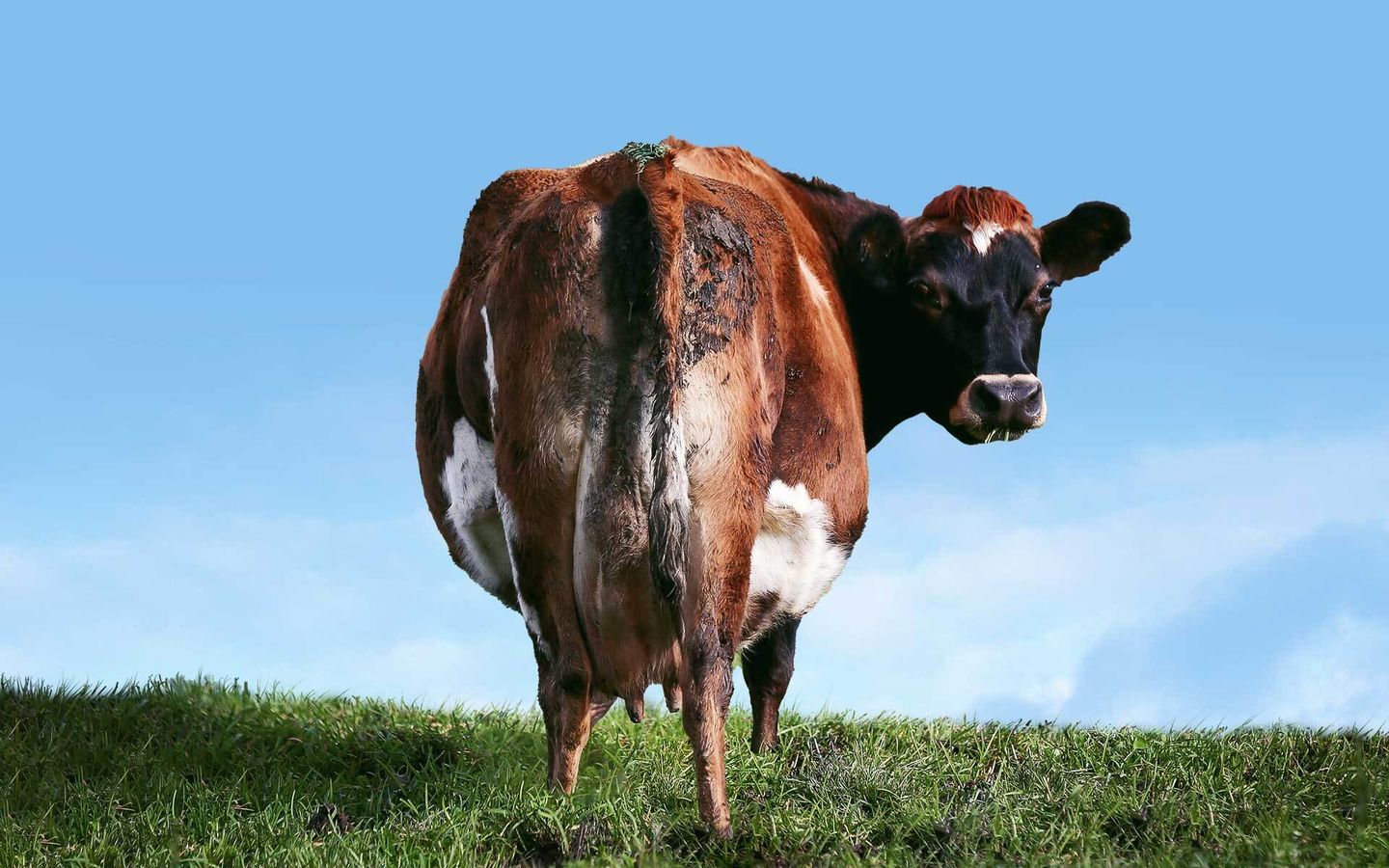 Dairy is New Zealand's biggest export earner, but the industry producing liquid gold for the economy is frequently accused of polluting our fresh water.

Ninety-five percent of New Zealand's dairy is exported, but the country still has to deal with 100 percent of the cows' urine and feces, as well as the excess chemicals from fertiliser for their feed leaching into waterways.

And there's international recognition that New Zealand's farming has impacted the environment.

A 2017 environmental performance review from the OECD says: "New Zealand's growth model is approaching its environmental limits. Greenhouse gas emissions are increasing. Pollution of freshwater is spreading over a wider area. And the country's biodiversity is under threat."

The most recent environmental reporting estimated, between 2013 and 2017, 95 percent of river length in pastoral land had nutrient or turbidity levels above default guideline values (DVGs). These values are based on what water quality would be like in the absence of human influence.

In pastoral land 75 percent of river length has a D or E rating for swimming due to E. coli counts.

Water quality in towns and cities is worse, however urban rivers only account for one percent of the length of New Zealand's rivers. The biggest proportion of our rivers - around 50 percent - are in pastoral land. 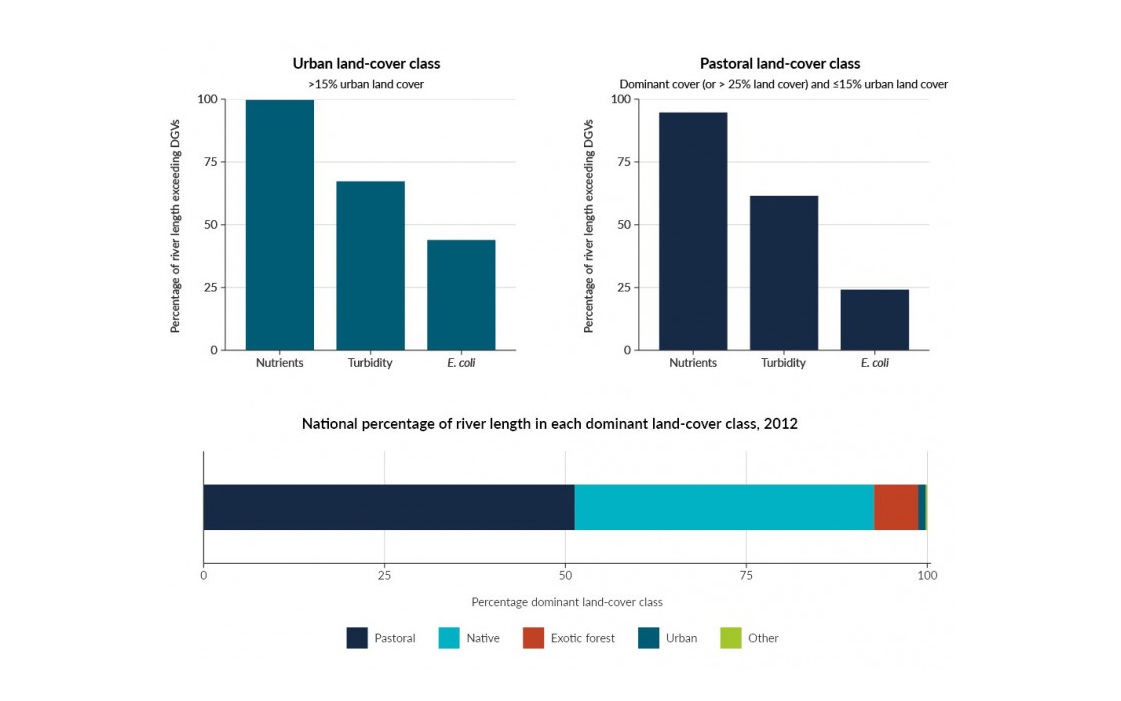 Photo: Supplied / Minstry for the Environment

Victoria University of Wellington's Dr Mike Joy has long highlighted the degraded state of New Zealand's waterways. Part of the damage the ecologist sees is caused by what he describes as an increasing reliance on farming inputs.

As the number of cows have increased, so has the amount of fertiliser, irrigation and supplementary food. Since 1990, the amount of nitrogen applied to land has increased 629 percent from 62,000 to 452,000 tonnes.

How does dairy cause the damage?

Farming 'inputs' all have different impacts and some are easier to mitigate than others.

More cows means more hooves walking through waterways and stirring up sediment. Fencing, stock crossings and culverts can help mitigate this and DairyNZ says farmers have worked hard to rectify issues. Riparian planting has also been carried out to reduce the amount of nutrients, such as nitrogen, entering water.

Even though dairy cattle numbers are reducing from the 6.7 million high in 2014, there's still more cows than there used to be, and more cows means more nitrogen-rich urine.

In Canterbury, the problem is exacerbated by the type of soil.

"They're very gravelly, sort of loose soils that that water flows through really, really quickly. What's happening is the urine, highly nutrient laden, almost totally nitrogen, urine going through those soils and appearing in the aquifers," Joy says.

What's the beef with nitrogen?

Cattle urine and fertiliser both contain nitrogen. It makes grass grow, but if there's more nitrogen than the grass can use, it leaches into groundwater. If it makes its way into rivers it promotes the growth of plants in the water and contributes to algal blooms, reduced oxygen levels and reduced light.

Too much nitrogen in water is bad for fish. Three-quarters of New Zealand's fish species are at risk of extinction, which Joy says is "higher than I can find for any country in the world".

It can also be bad for humans.

In drinking water, high levels can cause the rare but fatal blue baby syndrome. New Zealand's drinking water quality rules are set at a level to avoid this, however recent research has shown an association between much lower levels of nitrate in drinking water and bowel cancer.

What is the 1mg/L thing everyone is talking about?

There are two conversations going on at once, both calling for the central government to set nitrogen limits at 1mg/L, or under 1mg/L

One conversation is related to drinking water.

The level of nitrate-nitrogen allowed in drinking water is currently 11.3mg/L, a level set to avoid the risk of blue baby syndrome and in line with advice from the World Health Organisation.

Public health experts have called for the maximum allowable volume of nitrogen in drinking water to be lowered to 1mg/L as a precautionary response to emerging research associating bowel cancer, preterm births, and low birth weights with levels above 1mg/L.

The second conversation is about the amount of dissolved inorganic nitrogen (DIN) allowed in rivers and fresh waterways. Other countries, including China and parts of the United States and Europe, have a limit of 1 mg/L.

When the government put together a package of rules around freshwater in 2020 a limit on DIN was discussed but - controversially - not implemented.

Twelve scientists, including Joy, wanted the limit to be set at 1mg/L but five scientists of the 19-strong Science and Technical Advisory Group consulting on the fresh water package weren't convinced a bottom line would lead to an improvement in ecosystem health.

The government did strengthen the nitrate toxicity measure from 80 percent to 95 percent. This means the quality of water can only kill 5 percent of macroinvertebrates - creatures without backbones, which can be seen without a microscope - living in it.

It was a measure suggested by DairyNZ, who pushed for 90 percent, and promoted by the Ministry for Primary Industries instead of a DIN, but not everyone was happy with this, especially environmental groups.

When the government announced the new rules, it committed to a review of the DIN bottom line in September this year.

That review is now underway. The Ministry for the Environment told RNZ it's currently preparing advice for the government on whether the science behind a bottom line of 1mg/L DIN has become clearer and establishing the environmental benefit and economic impact of the bottom line.

What does the industry say about dissolved inorganic nitrogen bottom line?

DairyNZ is still against a DIN. "We oppose the DIN limit due to a lack of science demonstrating it will deliver the ecosystem health outcomes targeted. Instead, we advocated for strengthening of the nitrate toxicity standards," a spokesperson says.

Dropping to 1mg/L would have "massive impacts, significantly constraining production in many agricultural catchments over a rule which would not deliver better ecosystem health."

Fonterra says it supports a bottom-line but there are caveats: "We do not support using nitrogen and phosphorous limits alone as a measure of a waterway's health - measures should represent the full, biological ecosystem such as presence of macroinvertebrates and fish, and be tailored to each region."

Fonterra hasn't analysed what the economic impact of a DIN bottom line of 1mg/L would be.

Federated Farmers says its view is that "rather than imposing further standards and limits at this time, such as a 1mg/L rule, it is better to give the agricultural sector time to implement the plethora of new rules and regulations first."

In areas of the country which are intensively farmed, a spokesperson for Federated Farmers says a bottom line of 1mg/L would "have a substantial and perhaps devastating impact on farming and entire New Zealand economy."

What do the people who want a lower DIN say?

Recently there have been calls for the limit to be set to under one.

Joy co-authored a paper showing the 1mg/L limit is generous. "It should have been even less than that." The paper suggests 0.6mg/L.

Environmental groups are also calling for the limit to be set at "under one". In a joint statement Greenpeace, Choose Clean Water, Forest & Bird and the Environmental Defense Society said the science is clear and the government should slash the limit.