The wild weather in the Buller and Marlborough regions last weekend resulted in the third major flooding event in New Zealand this year.

Questions are being asked about "one-in-100-year" events that seem to be happening more and more often.

But climate scientists have been warning about how climate change will influence severe weather for a long time.

Perhaps it's the frequency of severe flooding this winter, coupled with the warmest June on record for New Zealand and the timing of deadly floods in Europe and rampaging fires in the US, Canada and Russia, that's really hitting it home for people at the moment.

So how is climate change involved, how are "one-in-100-year" events classified, and what does it all mean? RNZ is here to clear it all up. 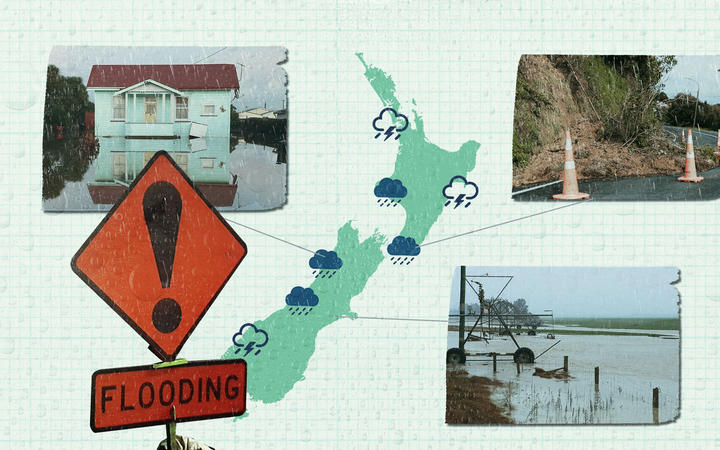 How climate change is involved

Climate scientist James Renwick told Morning Report: "We are gradually pushing the odds of a heavy rainfall event up, so it is more likely we will get events like this in the future if we let it get warmer".

That's true for New Zealand and the rest of the globe.

Now while we're here, that warming has a flip side - it also exacerbates heatwaves and dry spells.

West Coast as a case study

In comments provided by the Science Media Centre, climate expert Dr Luke Harrington said: "If you were to pick any time of year and location in Aotearoa where extreme rainfall lasting several days shows a robust signal of becoming more intense and more likely because of climate change, I would pick the West Coast of the South Island in the wintertime".

He explains that the past weekend's weather - which left hundreds of homes unliveable, among many other consequences - looked to be the result of an "atmospheric river" coming down with the tropics.

Rain was likely made worse due to sea surface temperatures also being warmer than average over the past few months - which itself was made more likely with climate change, he says.

You don't need to be a meteorologist to see that atmosphere has been particularly busy around New Zealand over the last 48 hours ️ ⚡ pic.twitter.com/2kJQi7kklW

"An atmospheric river is identified largely based on how much moisture is being transported through the atmosphere … and how fast that air is moving."

In most parts of the world, atmospheric rivers are expected to become more intense and frequent with climate change.

"Around New Zealand, however, we know that the westerly winds are strengthening in the wintertime with climate change. So in a warmer world, both the amount of moisture being carried will increase, and the speed with which that moisture is moving towards population centres on the West Coast of the South Island is also speeding up.

"This means that we expect the same bad weather system to lead to more rainfall than it otherwise would - without climate change - and this is particularly true for the Buller and Marlborough regions, since they are stuck between these incoming moisture-laden systems, and the Southern Alps forcing the air to compress and the rain to fall.

"So that's why we are confident that wintertime extreme rainfall over the West Coast of the South Island will be more intense and frequent because of human influences on the climate."

Friday flooding: where's all the water coming from?

A plume of moisture will stretch from the tropical Indian Ocean, across Australia, into the Tasman Sea, before finally landing in New Zealand.

Massey University professor Bruce Glavovic says - via the Science Media Centre - that many people struggle to make sense of why it was that 1-in-100-year floods seemed to be occurring much more frequently than once every hundred years.

"This is because the phrase - '100-year flood' - is a simplified description of a recurrence interval of a flood level with a 1 percent chance of occurring in any given year. Such flood levels can be reached in two successive years based on statistical chance alone.

"However, the reality of climate change is that some parts of our country are experiencing more frequent extreme weather events; and so flooding may become even more intense and frequent in some parts of the country."

Here's how those one-in-100-year floods are calculated.

Niwa principal scientist Chris Brandolino told Nine to Noon that "a one-in-100-year event basically is another way of saying there is a 1 percent chance of any given day for threshold to be breached.

"It's basically an understanding of probability of historical events, but the thing is, is that we have limited records.

"If we had 1000 years of records going back ... we would have a really good confidence and understanding of how frequent certain events are. But we don't."

As a result, probability is hard to calculate.

"When there is an event like we've seen now, we can use that for a bit of a re-analysis to understand 'what is the likelihood of this event happening' because we have a better understanding.

But what qualifies as a one-in-100-year event now may be a one-in-25-year event in 50 years' time - again, due to climate change, Brandolino says.

Glavovic says it's time to face up to that reality.

It says climate normals are what scientists define as an average statistic based on a 30-year timespan.

"So when climatologists describe rainfall amounts as 'above normal' or temperatures as 'below normal', they are currently comparing the figures to a 30-year average of data collected between 1981 and 2010," Niwa's media release said.

"Climate normals are important because they act as a benchmark against which recent or current weather observations can be compared and are also widely used as a representation of the most likely climate conditions for a given location and time of year."

"The switch won't change any actual weather measurements, but due to our warming planet, it will mean the new temperature normal will be higher than previously."

Niwa expects the new climate normals will be ready at the end of the year.

This is what's been coming

Almost every time there is an extreme weather event, you can find a quote from a scientist reminding you that sort of event will become more and more common.

Many, many studies have warned of the same thing. Take this report from March this year, as just one example.

In comments provided via the Science Media Centre, Victoria University of Wellington's Dr Judy Lawrence - a climate change expert - said we should expect more of what we've seen so far this year with events like the past weekend.

"We can expect more of this. It is a global phenomenon - but our exposure in New Zealand to such extreme pluvial [rain-related] events is a timely reminder that we not only have to prepare for them, but also plan our way out of the most severe impacts and shift from our reactive mode to anticipate where the worst effects will be felt."

Lawrence says we "seem deaf and blind to the science and the tools and methods for planning that we have available to address these risks.

"How much disruption can communities take before planning kicks in to reduce risks and plan for more of the extreme events and ongoing changes like sea level rise, which exacerbate hazards already being felt?"

Persistent heavy rain from Thu to Sun saw significant accumulations recorded over central NZ, esp Westland/Buller where 700mm was recorded in the ranges.

Some places received more rainfall in this period, than their total monthly July average!
^AR pic.twitter.com/WuYYPNsNKl