By Isla Binnie and Kate Abnett for Reuters

The extreme rainfall causing deadly flooding across western Germany and Belgium has been so alarming, many across Europe are asking if climate change is to blame. 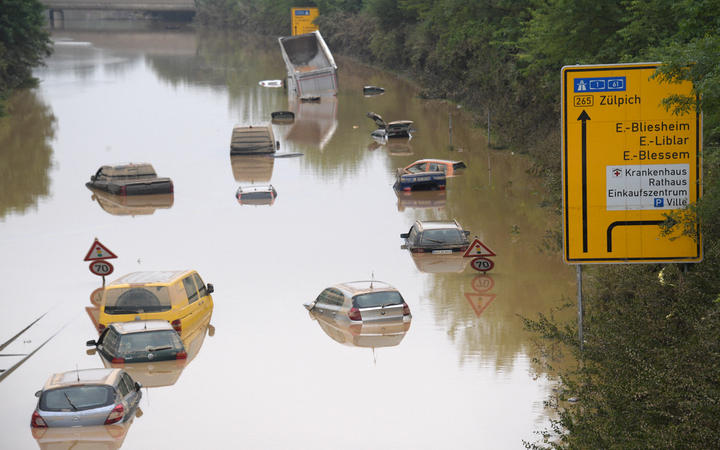 Submerged cars and other vehicles are seen on the federal highway B265 in Erftstadt, western Germany. Photo: AFP or licensors

Scientists have long said that climate change will lead to heavier downpours. But determining its role in last week's relentless downpours will take at least several weeks to research, scientists said on Friday.

"Floods always happen, and they are like random events, like rolling the dice. But we've changed the odds on rolling the dice," said Ralf Toumi, a climate scientist at Imperial College London.

Since the rainfall began, water has burst riverbanks and cascaded through communities, toppling telephone towers and tearing down homes along its path.

At least 170 people have been killed and hundreds more were missing as of Saturday local time.

The deluge shocked many. German Chancellor Angela Merkel called the floods a catastrophe, and vowed to support those affected through these "difficult and scary times".

In general the rising average global temperature - now about 1.2 degrees Celsius above the pre-industrial average - makes heavy rainfall more likely, according to scientists. 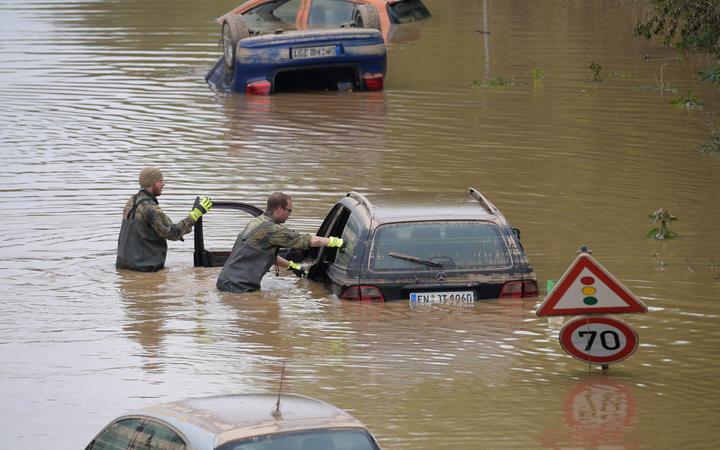 Soldiers of the German armed forces Bundeswehr search for flood victims in submerged vehicles on the federal highway B265 in Erftstadt. Photo: AFP

Warmer air holds more moisture, which means more water will be released eventually. More than 15cm of rain soaked the German city of Cologne on Tuesday and Wednesday.

"When we have this heavy rainfall, then the atmosphere is almost like a sponge - you squeeze a sponge and the water flows out," said Johannes Quaas, professor of Theoretical Meteorology at Leipzig University.

Other factors including local geography and air pressure systems also determine how specific areas are affected.

Geert Jan van Oldenborgh of World Weather Attribution, an international scientific network that analyses how climate change might have contributed to specific weather events, said he expected it could take weeks to determine a link between the rains and climate change.

"We're quick, but we're not that quick," said van Oldenborgh, a climate scientist at the Royal Netherlands Meteorological Institute.

Early observations suggest the rains might have been encouraged by a low-pressure system parked over western Europe for days, at it was blocked from moving on by high pressure to the east and north. 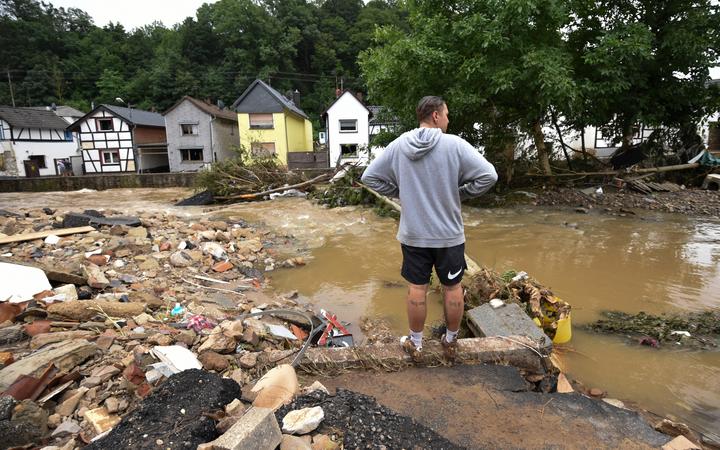 A man standing at a flooded intersection near the Erft river in Iversheim near Bad Muenstereifel, western Germany. Photo: AFP or licensors

The floods follow just weeks after a record-breaking heatwave killed hundreds of people in Canada and the United States.

Scientists have since said that extreme heat would have been "virtually impossible" without climate change, which had made such an event at least 150 times more likely to occur.

Europe also has been unusually hot. The Finnish capital of Helsinki, for example, just had its most scorching June since 1844.

This week's rains have smashed rainfall and river-level records in areas of western Europe.

Though researchers have been predicting weather disruption from climate change for decades, some say the speed with which these extremes are hitting has taken them by surprise.

"I am scared that it seems to be happening so quickly," said Hayley Fowler, a hydroclimatologist at Newcastle University in Britain, noting the "seriously record-breaking events all over the world, within weeks of each other."

Others said the rainfall was not such a surprise, but that the high death toll suggested areas lacked effective warning and evacuation systems to cope with extreme weather events.

The European Union this week proposed a raft of climate policies aimed at slashing the bloc's planet-warming emissions by 2030.

"We have already a warmer world with melting ice, rising seas, more extreme weather events. That will be with us and with the next generations," Rahmstorf said. "But we can still prevent it from getting much worse."