Tuia - Encounters 250 is an initiative marking 250 years since the first onshore meetings between Māori and Europeans. 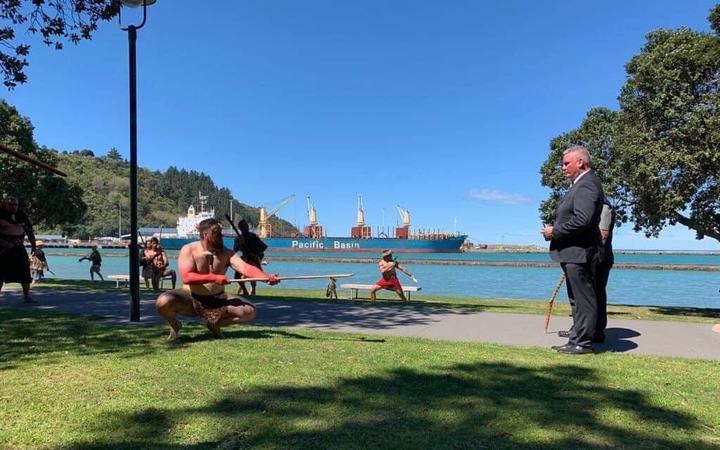 Minister for Crown Māori Relations Kelvin Davis has picked up the wero laid down. It's one of five being laid along the way. Photo: RNZ / Māni Dunlop

Nearly 10,000 people are expected to converge on Gisborne over the next week to see the waka hourua, and European ships come to shore, as they did 800, and 250 years ago, respectively.

Te Moananui Flotilla has arrived in Tūranganui a Kiwa and will be welcomed today by a mass pōhiri.

The three waka hourua, Haunui, Ngahiraka mai Tawhiti and Tahitian waka, Fa'afaite are visiting significant sites around the bay before disembarking at Waikanae Beach to be welcomed by mana whenua at about 11am. 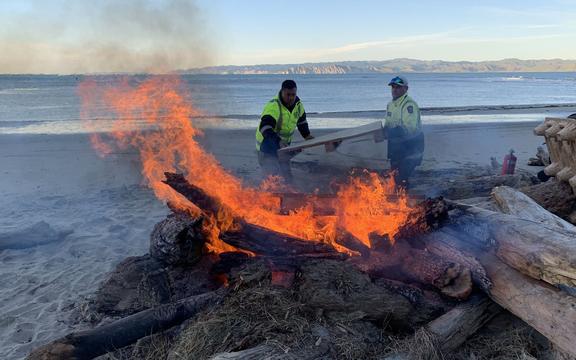 The first fire was lit at Kaiti at sunrise. Photo: RNZ / Māni Dunlop

About $20 million is being spent on events planned to run from October to December.

While preparations in Gisborne are ramping up, the East Coast region is confronting its fraught colonial history.

Te Hā Trust general manager Glenis Philip-Barbara, who has been organising the commemorations in Tūranga, said Tuia 250 was a turning point for the Gisborne community.

But there have been calls from indigenous rights advocate Tina Ngata for the celebrations to be boycotted.

The Ministry of Culture and Heritage defended the commemorations and said Tuia 250 was also about acknowledging colonisation.