Preparations in Gisborne are ramping up ahead of the Tuia 250 commemorations, as the East Coast region confronts its fraught colonial history. 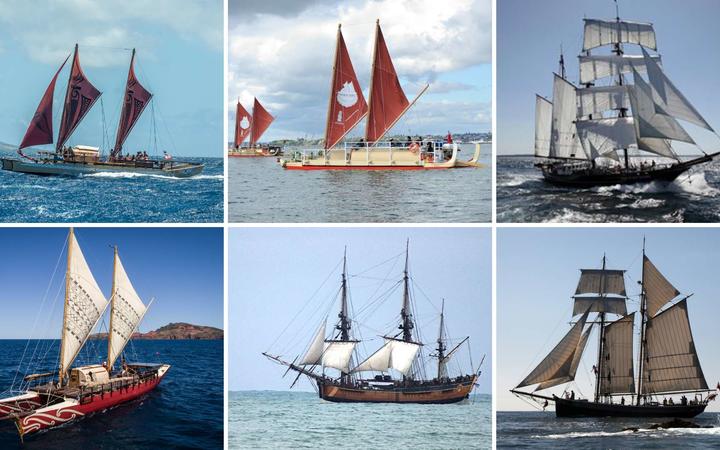 The six core vessels of the Tuia fleet. Photo: Ministry for Culture and Heritage

It has taken 15 years to get off the ground but it will kick off tomorrow in Gisborne, with over 10,000 people expected to converge upon the city for the commemoration.

There were tears on Wednesday as the British High Commissioner expressed her regret on behalf of the British government to Gisborne iwi whose ancestors had been killed by James Cook when he first arrived in 1769.

Te Hā Trust general manager Glenis Philip-Barbara, who has been organising the commemorations in Tūranga, said Tuia 250 is a turning point for the Gisborne community.

"People in this community are seeing this as a turning point, the point at which Aotearoa New Zealand woke up to its dual heritage origins and began to think about what respecting the Treaty actually looks like, now these are comments I'm getting not just from Māori people but from Pākehā people too in our community so it feels like we're moving towards something good."

But there have been calls from indigenous rights advocate Tina Ngata, for the celebrations to be boycotted.

She is a leading a series of events every evening, called Wetewetehia, which will delve into the atrocities that Cook committed, including a mock trial for Cook, and an international indigenous panel discussion about the doctrine of discovery.

"Wetewetehia 250 is actually about the pulling apart, the dismantling and the careful observation of what's happened in our colonial history, going all the way back to some of the global forms of colonisation so Wetewetehia 250 provides a platform to look at those histories.

There will also be art exhibitions at Tairāwhiti Museum, such as Ko au, ko matou, which features a sculpture of a hand giving the fingers to the Endeavour.

Also at the Tairāwhiti Museum, are 37 tāonga that were taken by the endeavour crew, and are on loan from museums around the world.

"We know we are charged with the safe travel, and care of tāonga that are over 250-years-old, they've got to travel 25,000kms across to the other side of the world, and a whole range of institutions both in the UK and in New Zealand had to support that," Tairāwhiti Museum director Eloise Wallace said.

One of her favourite tāonga is a kahu kiri kurī, a dog skin cloak.

"It's made with stripped dogskin, and it's just intriguing, when we were wānanga with our weavers, talking about the construction of this cloak, it's still embedded with kōkōwai from the person who would've worn it."

The commemorations will kick off on Saturday with a mass pōhiri at Tūranganui a Kiwa, as the two waka hourua, Haunui and Ngahiraka Mai Tawhiti - and a Tahitian va'a tipaerua, Fa'afaite, arrive on the shores.

On 8 October, the tall ships will arrive on shores, and join the waka to make up the flotilla, which will travel around the rest of the country together.

This time there won't be a pōhiri, after the four Gisborne iwi declined to participate.

They will instead hold an interdenominational karakia to remember those who were killed by Cook and his men.

On 9 October, the inner harbour will be opened up for a massive open day, where people can meet the crew, look at the waka, learn about voyaging history.