A Ngati Oneone representative says he's optimistic about the British High Commissioner's statement of regret and believes it's more meaningful than an apology.

The High Commissioner is addressing Gisborne iwi today at two ceremonies, the first to Ngāti Oneone where she will deliver the first statement of regret at the site of where a statue of their ancestor Te Maro stands.

He was the first to be killed at Captain James Cook's first encounter.

Another event will take place at Whakatō marae this afternoon for the three other iwi.

Ngāti Oneone spokesperson, Nick Tupara, said the High Commissioner bravely took the role to acknowledge Cook's actions and was hopeful for the future.

"I think for me it's better than an apology, an apology suggests to me that you make a statement and we have left it at that.

"Whereas a statement of regret suggests there is an opening for some dialogue going forward. It suggests a possibility of a relationship working together and growing together helping each other out. I am very optimistic that this statement of regret is a far more poignant opportunity for Ngāti Oneone and for the rest of our community to find pathways as a collective."

The British High Commission made the decision to give the statement of regret in response to Tūranganui-a-Kiwa iwi wanting their history to be heard and acknowledged.

Mr Tupara says that call wasn't made specifically to the British government but he says the High Commissioner took up the responsibility to engage in dialogue, which he is heartened by.

He said it could have been much easier to step away from the table.

"The question was who would do that apology, a lot of folk went scurrying off into the distance and left the table of discussion and I think bravely the British high commissioner said 'I feel I could make a statement of regret; I think I could make a contribution to that' and was the only one that came forward.

"So we decided, OK then, you are welcome to come and be with us." 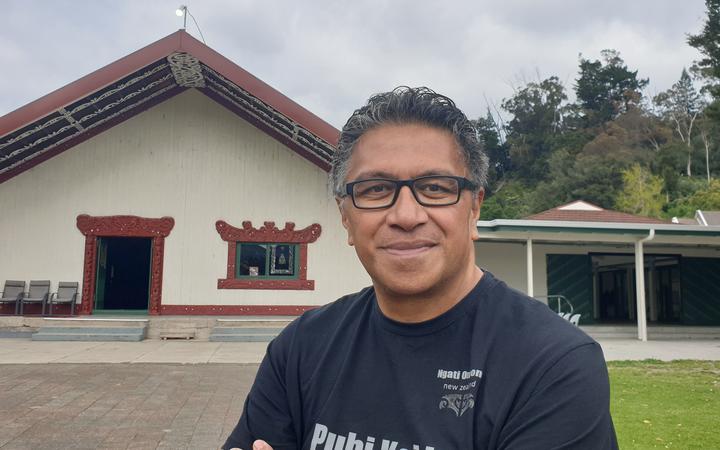 Laura Clarke was due to deliver the official statement of regret to Ngāti Oneone at the statue of Ngāti Oneone ancestor, Te Maro - the first to be killed when Cook arrived - at Ruatanuika on Titirangi maunga.

Nick Tupara said it was a significant place.

"We have chosen to put a statue there, where he performed rituals, studied the stars, the Moon and the sun to create a planting and management plan to advise his people of how to grow food and sustain themselves. That was his job.

"We wanted him to be back there - not at at the landing site, not the site where he was killed, but talk about his whole life. He gets to look over what was formally his gardens, he gets to look at the city and that was important to us," he said.

Although Mr Tupara is hopeful about today's events, he said it is still tinged with sadness and reflects on growing up in a 'Cook' town where the stories of his ancestors were seldom told - something that after today is clear is changing.