A waka flotilla is being welcomed at Cape Runaway, as it arrives in New Zealand for the Tuia 250 celebrations. 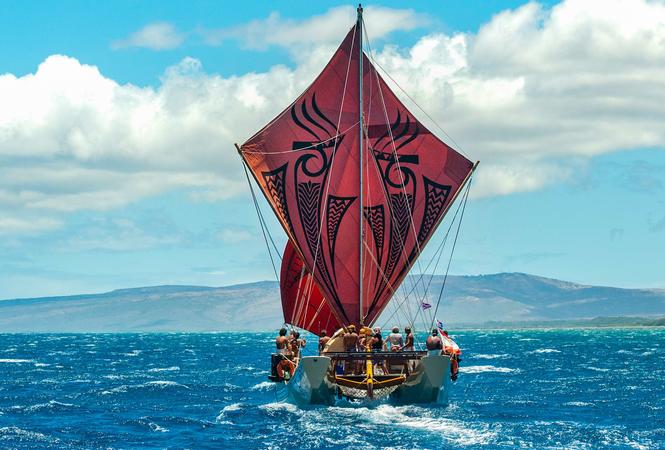 More than $20 million is being spent on events and resources to mark the 250 years since James Cook first landed in New Zealand, but it will also include commemorations of the first Polynesian waka that arrived in New Zealand 800 years ago.

Two waka hourua - Haunui and Ngahiraka Mai Tawhiti - and a Tahitian va'a tipaerua, Fa'afaite, are arriving at Haika o Tainui beach, in Cape Runaway, at 11am.

Cape Runaway, otherwise known as Whangaparāoa, is the place where a fleet of waka resisted the arrival of James Cook but is also where ancestral waka landed some 800 years before the Endeavour sailed in.

The flotilla is being welcomed by iwi Te Whānau a Apanui, with a whakatau for King Tuheitia at 10am, followed by the arrival of the waka hourua at 11am.

Māori Crown Relations: Te Arawhiti Minister Kelvin Davis who will also be there, has said that it has been a priority for the government to ensure that Māori perspectives had "rightful prominence" in the commemorations and that iwi and hapū had the opportunity to share their history.

"Tuia 250 means having honest conversations about our history and I encourage all our communities to get involved, to grow their respect for their own history and the history of others," he said.

The waka will then sail to Tūranga or Gisborne for a dawn pōwhiri next Saturday before they join together with the other three European ships - the HMB Endeavour replica from Australia, the R.Tucker Thompson and the Spirit of New Zealand.

But there will be no pōwhiri for the replica of the HMB Endeavour, at Tūranga, after four major iwi in Gisborne refused to hold one for it.

Rongowhakaata Trust general manager Amohaere Houkamau said in a statement that iwi believed the descendants of colonialists who settled in the city should welcome the fleet instead.

The HMB Endeavour arrived in Tauranga yesterday, where it is getting customs clearance.