Four major iwi in the Tūranganui ā Kiwa region are refusing to hold a pōwhiri for a fleet of vessels, including a replica of Captain Cook's ship the Endeavour and the Navy, set to arrive in the city next month. 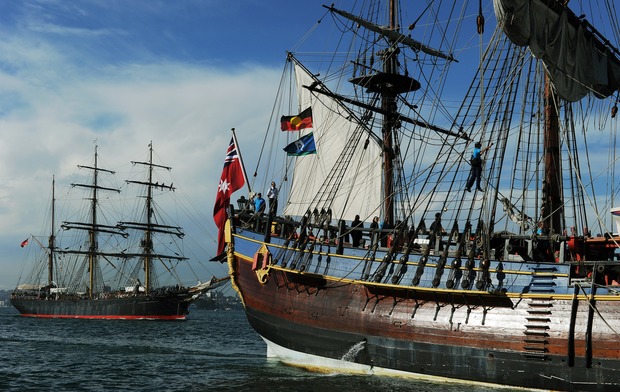 A replica of Captain Cook's ship the Endeavour at Sydney Harbour in 2012. Photo: AFP

The ships will undertake a voyage around New Zealand, starting in Gisborne, to mark 250 years since Cook's arrival in Aotearoa as part of Tuia 250.

The refusal comes after far north iwi Ngāti Kahu recently banned the replica of the Endeavour from docking in Mangonui during its voyage.

Rongowhakaata Trust General Manager, Amohaere Houkamau, said in a statement iwi believed the descendants of colonialists who settled in the city should welcome the fleet instead.

"We accept that the crew of the Tall Ships flotilla need to be welcomed to our city, and respectfully suggest that the descendants of the Colonialists who came and settled amongst us are best placed to conduct that welcome.

"We therefore acknowledge the Gisborne District Council in agreeing to host a civic welcome for these guests of our city."

She said iwi would still conduct a welcome to Voyaging Waka and whanaunga of Te Moana nui ā Kiwa.

"On the morning of the 8th October we will conduct a Dawn Karakia, and inter-denominational Church service, to commemorate the nine tīpuna who were shot or injured during the events of October 1769.

"The Tūranga iwi and Ngāti Oneone collective will host a Wānanga on 6 October at Waiohiharore, Railway Station site, to enable our iwi and hapū to share their collision and encounter stories and to provide a safe environment for others to share their stories, views and perspectives."

Meanwhile, the Minister for Māori Crown relations said he accepts some people are always going to always oppose the Cook commemorations.

Kelvin Davis said he's known for some time that Ngāti Kahu was banning the replica of Captain Cook's ship the Endeavour from docking in Manganui.

He said the Ministry of Culture and Heritage tried its best to consult and he expects differing opinions on the commemorations.

In a statement, Ministry for Culture and Heritage deputy chief executive Tamsin Evans said the ministry respected the decision by iwi.

"Earlier this month we received notification from the iwi representatives in Tūranga that the Tall Ships would not be welcomed with a pōhiri, which we fully respect.

"All vessels will acknowledge sites significant to Pacific voyaging and mana whenua as they approach Tūranga. We have been guided by mana whenua in identifying these sites and we are continuing to work with Tūranga iwi through Te Hā Trust.

"We support Tūranga iwi to share their stories with the public in the way they choose to. People will have a chance to experience the vessels up close on open days, take part in Pacific voyaging workshops and activities, see a travelling star dome and participate in other community-led events in Tairawhiti."