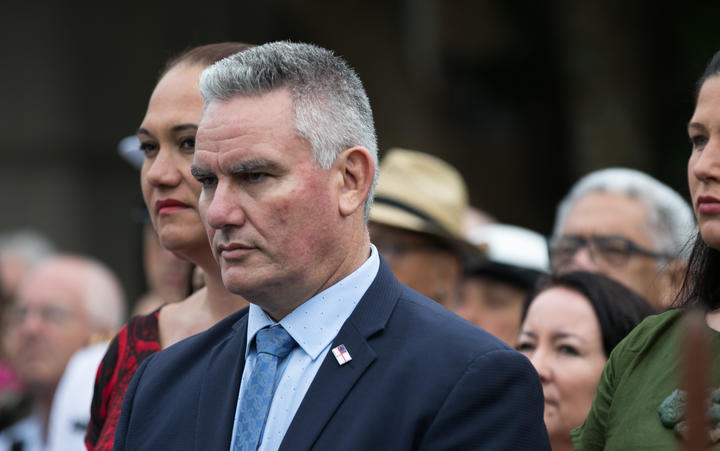 Minister for Māori Crown Relations Kelvin Davis says the commemorations will be an opportunity to focus on the Māori side of the story of Captain Cook's arrival in Aotearoa. Photo: RNZ / Dan Cook

Some Māori are calling for a boycott of this year's commemoration of James Cook's landing in New Zealand 250 years ago. The $20 million commemorations, Tuia Encounters 250, are planned for October to December.

"When somebody lands and then shoots the first person that they see and then the next day shoots another 15 and then wants to get a closer look at a waka, so they shoot everybody in the waka ... and everybody in the waka was unarmed - they were just fisherpeople. To call that an encounter is egregious in the extreme," Ms Ngata said.

Māori were still "labouring under the historical and enduring rights violations" resulting from Cook's landing and the colonisation of Aotearoa, she said.

Ms Ngata has raised her concerns about the commemorations with the United Nations Permanent Forum on Indigenous Issues in New York.

However, Mr Davis said the government was not planning a straightforward celebration of Cook's landing at Tūranganui-a-Kiwa, later named Gisborne, in 1769.

"Tuia 250 is an opportunity for us to honour those tūpuna who were killed and to tell their story," Mr Davis said.

Rather than denigrating Cook's actions, Mr Davis said he wanted to balance European histories by focusing on the Māori side of the story.

"[Cook] did arrive in New Zealand, he did a number of things when he got here that, certainly, Māori have not forgotten and we still feel the pain of and I believe this is an opportunity for our Māori story to be told properly.

"We should just grasp that opportunity ... to make sure people know what happened and we're still suffering the consequences of many of those encounters."

Māori artist Robyn Kahukiwa has started an anti-Cook Facebook group, where people are signing Declarations of Non-Participation in Tuia 250.

The government plans to spend $13.5 million on Tuia, the Lotteries Grants Board will provide $9 million, and more funds will come from NZ On Air.

A key part of the events will be a flotilla of vessels sailing to sites of significance around the country. A replica of the Endeavour, Captain Cook's ship, will also arrive in New Zealand.