A large bonfire - the first at Kaiti at sunrise - has been lit along the beach in Tūranganui a Kiwa to guide three waka hourua into the bay to start the Tuia 250 commemorations in Gisborne. 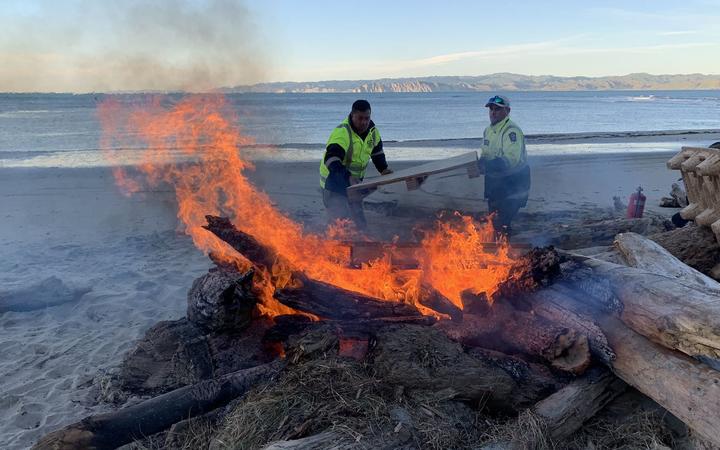 The first fire lit at sunrise to guide the three waka hourua into the bay. Photo: RNZ / Māni Dunlop

Nearly 10,000 people are expected to converge on Gisborne over the next week to see the waka hourua, and European ships come to shore, as they did 800, and 250 years ago, respectively.

Te Moananui Flotilla has arrived in Tūranganui a Kiwa and will be welcomed later this morning by a mass pōhiri.

The three waka hourua, Haunui, Ngahiraka mai Tawhiti and Tahitian waka, Fa'afaite are visiting significant sites around the bay before disembarking at Waikanae Beach to be welcomed by mana whenua at about 11am.

Beautiful day in Tūranganui a Kiwa to welcome Te Moananui flotilla into the bay! This was the first fire lit at sunrise to guide the three waka hourua in - they’ll stop at historic sites along the way before disembarking at Waikanae beach later this morning. pic.twitter.com/Fbb45w7lB1

Prime Minister Jacinda Ardern and other dignitaries will also be attending.

Waka ama and waka taurua will go out from the shore and flank them as the waka hourua go into the bay.

The kawe mate of captain and carver Ema Siope is also being carried.

The mauri of Tupaia, the Tahitian navigator who was on the Endeavour when it first came to Aotearoa, is in a form of a kohatu or stone, and will be taken on to Te Poho o Rawiri Marae later today.

Te Moananui Flotilla is the start of the Tuia 250 commemorations in Gisborne - with a week of events ahead.

A replica of the Endeavour is arriving on Tuesday, which won't be met by a pōhiri as decided by local iwi.

The fires that were lit today to guide the waka hourua in, will all be lit on the day the Endeavour arrives - not to guide it but as a signal that Te Ahi Kā or the home fires are already burning.

French Polynesia president Edouard Fritch is in Gisborne to mark the Tuia 250 commemorations.

Mr Fritch was invited to New Zealand in recognition of the French Polynesian voyager Tupaia's mediator role between Māori communities and the Endeavour crew during James Cook's first visit to New Zealand in 1769.

There were tears on Wednesday as the British High Commissioner expressed her regret on behalf of the British government to Gisborne iwi whose ancestors had been killed by Cook when he arrived.