Whānau are seeking a formal apology from an artist and contestant on The Block, saying a photo of their kuia has been defaced and dishonoured. 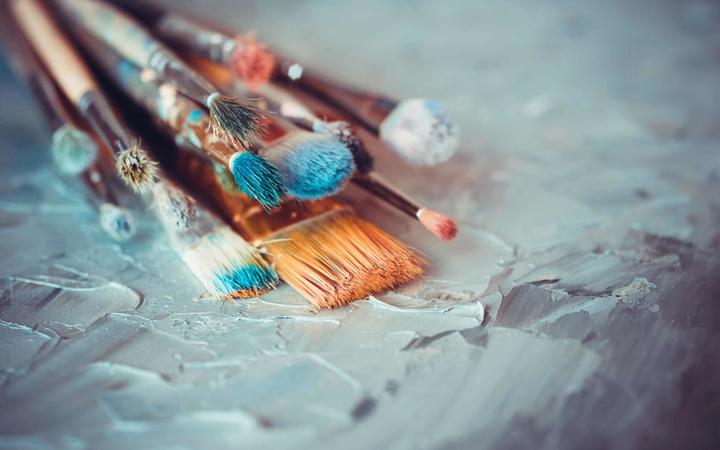 Contestant Mikaere Gardiner, who is also an artist, had put his controversial photographs and painting up in the apartment that will be going to auction on live television on the programme this weekend.

They have since been taken down.

The original photographs and a painting of tīpuna from Kawhia, Waikato and Whaingaroa have been repainted with various images, including flowers and butterflies, painted over them.

Two of the original photos of kuia, Kirikino Kohitu and Herepo Rongo, were taken by Marti Friedlander in the 1970s and a Charles Goldie painting of Te Aho o Te Rangi.

Following outrage on social media after the paintings appeared on TV this week, Mr Gardiner said in a statement he did not mean offence and apologised.

"I apologise unreservedly for any offence caused with my painting displayed in the hallway of The Block NZ apartment building. My art is intended to examine the ideas behind the perception of truth, taboo and the impact of colonisation in New Zealand.

"However, I certainly did not mean to cause any offence." He said in a statement circulating on social media.

A descendent of one of the kuia said that was not good enough, and wanted a public apology to all whānau.

Marie Brown is a great grand daughter of Kirikino Kohitu - known to whānau as Nanny Tau - and found out about the paintings scrolling through social media.

She told First Up she was outraged.

"I thought I was seeing things to be honest, I had to click on the photo and make it full size and thought 'what the hell is this?'"

She said the whānau were angered and upset and although the works had been taken down they did not know what had happened to them since, and wanted a further explanation.

"We haven't heard from him - we have received a generic response from The Block - which they have sent to the family members they have done this to. It isn't an actual genuine apology, there is no emotion behind it, it is just written and sent."

Ms Brown said kaumātua in her whānau wanted answers and were perplexed why their kuia was chosen.

"Why did he choose our Nanny to do that - what was wrong with his Nanny?"

Mediaworks, which produces The Block, declined to be interviewed and instead pointed RNZ to the statement from The Block on behalf of the artist, which was posted to social media and sent to whānau.

Ms Brown said she would be willing to take collection of the paintings herself.

"He should have known better - knowing she has whakapapa out there somewhere, he has just picked her up - she is not just a picture, she is our Nanny. I have been told they were taken down. I live in Auckland, I am happy to pick them up."