Ahead of the Rugby World Cup later this month, New Zealand Rugby has sent a clear message to its sponsors and partners to treat the haka 'Ka Mate' with respect, and ensure they acknowledge the iwi who created it. 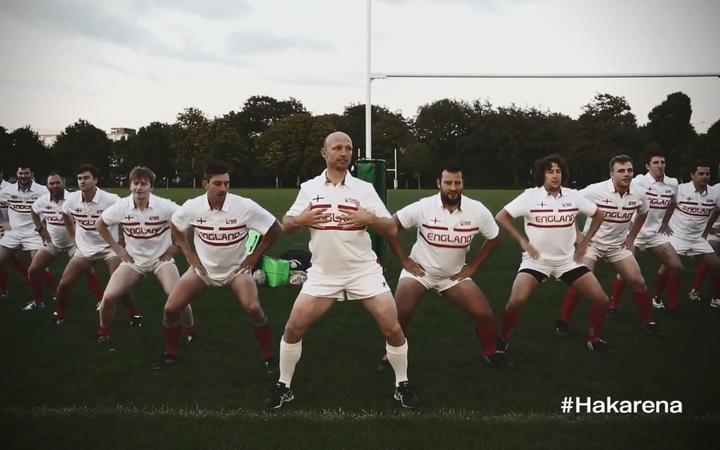 The English rugby team advertised ahead of their 2015 campaign with a video produced by media company BJL, which parodied the All Blacks' 'Ka Mate' haka created by Te Rauparaha, a Ngāti Toa chief. Photo: Youtube / Screenshot

The haka 'Ka Mate' is well-known around the world thanks to the All Blacks.

The pre-game ritual has been mocked and misused time and again by Rugby World Cup sponsors, such as in a Heineken beer television ad, and a 'hakarena' ad featuring members of the English rugby team in 2015.

The attribution must be clearly visible on the product, unless an agreement is reached with the iwi, but the law doesn't apply overseas.

Luke Crawford, the cultural advisor to the All Blacks, said New Zealand Rugby had met with its sponsors and partners to make sure they knew what was expected of them.

"The way that we would expect is that they attribute the haka to Te Rauparaha, as the composer, and to Ngāti Toa Rangatira," he said.

"The other thing too is, where it's appropriate, we'll also push them to Ngāti Toa, and [say] that they should be having conversations directly with Ngāti Toa."

He said the players also knew what was expected of them when performing the haka.

"The team have a guardianship group that actually oversee not only 'Ka Mate', but now 'Kapa o Pango' as well. That's how seriously they take it.

"There's always a kōrero about the appropriateness of where and when it should be performed. It's very, very special to them. It's the haka matua for the All Black team because it's been with us for so long."

Te Rūnanga o Toa Rangatira chair Taku Parai said he was pleased NZ Rugby had made an effort to ensure its partners used it appropriately.

"That's hugely significant because sponsors, especially the big ones, they don't like to have barriers put around in terms of how they want to promote.

"It's big for New Zealand Rugby to pull them up on different aspects, in terms of what they know and understand about how we feel the haka ought to be used."

Some people in New Zealand are still not getting the message, however.

Last week, artist Dick Frizzell came under fire for advertising a t-shirt line printed with the lyrics of 'Ka Mate'.

Aroha Mead, a specialist in Māori intellectual property rights, said while the Haka Ka Mate Attribution Act was a huge leap forward for Māori, it did not go far enough.

"The legislation in its current form actually forbids Ngāti Toa from making any financial compensation. That's actually contrary to the principles of intellectual property.

"People don't even know that it even exists. They're still taking [and] they're still using. And we need to really strengthen the legislation."

She said anyone thinking of using 'Ka Mate' should carefully read the legislation, and consult with Ngāti Toa Rangatira, to ensure they upheld the mana of the iwi.