Was TJ Perenara's the greatest try by the All Blacks at a Rugby World Cup tournament? Was it even one of the best seen at a cup? RNZ has done a deep dive to find out. 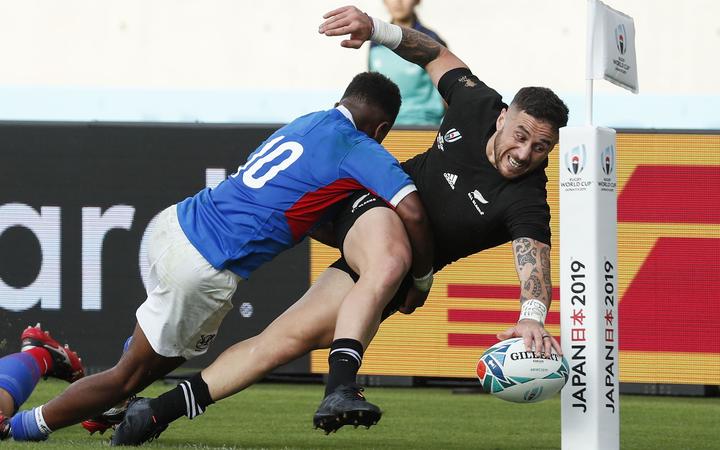 TJ Perenara scores a try during the Japan 2019 Rugby World Cup Pool B match between New Zealand and Namibia at the Tokyo Stadium Photo: AFP

Those were the questions being asked yesterday after his touchdown in the final moments of the All blacks crushing win over Namibia in Japan last night.

It even had Steve Hansen, always the most controlled of world rugby coaches in public, giving a fist-pump to celebrate.

Wales Online, which speaks to a rugby-mad nation, called it the try of the tournament so far and describing it as "utterly outrageous".

They even quoted the ITV commentators as saying: 'Oh, the circus has come to town!'

So how does it stack up against the rest? Here are some of the best we could find.

The All Blacks' best at a Cup

We have all seen the try over and over but it doesn't diminish with age.

That astonishing strength, the awesome brutality of running over a player, that recovery.

Maybe too it is the fact it is so monochromatic; a guy in a black jumper running over a player in a white jersey has an elemental simplicity.

Of course, it is even better that the white is the white of perennial challengers England in the semifinal.

Ladies and gentlemen, THAT Jonah Lomu try against England in 1995.

Well before he was coach of Italy and the Blues, way back before he was a Sir and immeasurably helped New Zealand come to terms with mental health and depression, John Kirwan was a great wing.

He scored many memorable tries but this one against Italy at the first Rugby World Cup may well be his best.

He was 22, a "Baby Black" as members of the young side were known back then, he had trained hard for the cup - and he could weave, dart and sprint.

Joe Rokocoko and Carlos Spencer - through the legs pass

Maybe we have got used to All Black razzle-dazzle; the back of the hand flicks, the cross-field kicks, the offloads.

But there is still a place in the memory for a pass through the legs and it features Joe Rokocoko.

It came in the 2003 World Cup quarterfinals against South Africa and featured that wing beloved of Aucklanders who saw him at his peak, probably the best of the trio of Joeli Vidiri and Sitiveni Sivivatu.

Here he is at his best, scoring tries.

Let's not that Carlos Spencer put "this on a plate" as the commentators said.

Sometimes it's just a great move.

Check out again - if you haven't watched it dozens of times already - Tony Woodcock and the All Black forwards opening up the French lineout to score in the final.

And, of course, it was the 2011 final - nailbiting, gut-wrenching and close.

Doug Howlett - why not

And let's not forget that man Doug Howlett, the record holder for most tries by a New Zealander, so often the end of an attacking All Black backline.

The best against the All Blacks

And because we are even-handed All Black fans - not one-eyed at all - let's remember some of the best tries scored against us at the Rugby World Cup.

Breyton Paulse - the kick and kick and chase

1999 - not a vintage year for the All Blacks at the Rugby World Cup.

Here is surely one of the greatest individual tries, a kick and kick and chase, by the Springbok speedster Breyton Paulse.

Like this year's Springbok wing hero, Cheslin Kolbe, Paulse was considered small for test rugby but he was fast, so fast.

He was the South African schools athletics champion at 200m and 400m.

Unfortunately, we all know what happened.

The French weren't given a chance in the 1999 semifinal; they were well behind at halftime. And then - well, and then - they scored 33 unanswered points.

Think about that for a second, 33 points against the All Blacks.

Admittedly Jeff Wilson scored a late consolation but, by then, not a single person cared.

Soak it in. A low point, but what a try.

Best of the rest

Long before the upset against the Springboks in 2015 and the Irish this cup, there was this try.

Beautifully controlled, end-to-end and against Wales!

"A good pass came to me and I just ran like mad," said Endo. Like mad indeed.

Oddly this try in a vital semifinal at the 1987 against Australia looks partly brilliant and partly like mad skittles - and isn't that the French rugby way.

The passes are either pinpoint or flung slapdash - and somehow someone holds onto them.

Still, watch to the end and see Blanco's exhausted collapse in triumph. Oh, the French.

In 2007, the Fijians were on fire against the Welsh.

Just look at how Vilimoni Delasu has three men to beat; they look like they have him well covered - and then comes the chip kick.

A great moment for Fijian rugby.