There was the pluck of the Namibians then the deluge of skill by the All Blacks and then finally that TJ Perenara try. 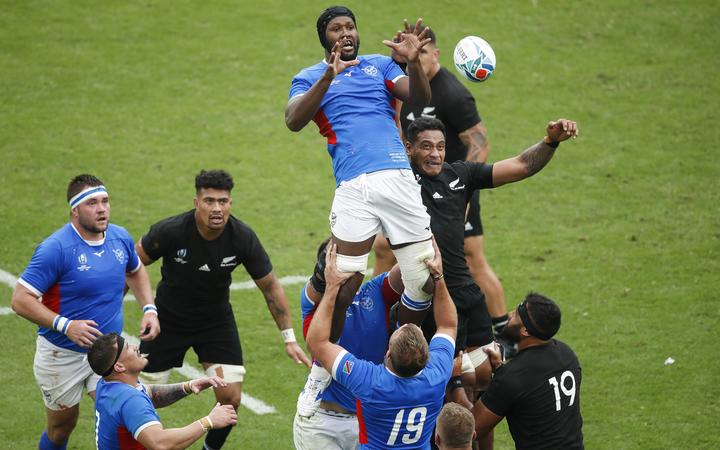 Namibia's lock Tjiuee Uanivi (C) jumps for the ball in a line out during the match between New Zealand and Namibia. Photo: AFP

Those are the key elements highlighted by the world media after the 71-9 lopsided win by the All Blacks over the Namibians in Tokyo last night.

The Namibian praised its own side for turning up to play.

"Namibia are the World Cup's undisputed whipping boys, after never winning a game in the competition and suffering embarrassing defeats like 142-0 against Australia in 2003.

"The last time they beat a Tier One nation was Ireland in 1991, but they turned up to play at a cool, windswept Tokyo Stadium and were first on the board through a Damian Stevens penalty after two minutes."

South Africa's News24 pointed out the difference between the two halves of rugby.

"It was 24-9 after the first half and New Zealand looked like they were lacking fluency, but they have put on quite a show in the second half to win the game by 62 points and Namibia could not stop them in the second half."

And South Africa's Independent Online focused on Namibian coach Phil Davies' call for his young team, one of the youngest at this Rugby World Cup, to have more matches against Tier 1 nations so they could improve.

"Sunday was the first time that Namibia, who include just 11 professional players in their 31-man squad, have played a tier-one nation since facing Argentina at the last World Cup four years ago. Davies said; "We have a good culture but we need a cohesive system over a long period of time, maybe a couple of generations, to get to the level where we can actually compete."

The Independent's rugby reporter in Tokyo Jack de Menezes pointed out how many All Blacks were playing out of position - and how little the game mattered in terms of World Cup standings.

"By the end of New Zealand's rout of Namibia, the All Blacks had a scrum-half at 10, their starting fly-half on the wing, a wing in the centre and a prop in the sin-bin for the second time, but it did not matter one bit."

"There will be little to take from the match to test New Zealand's credentials, but then it was never going to be a day for that anyway.

"Instead, it was just a day to enjoy what was happening in front of you, and there haven't been too many chances to do that this tournament given the drama that has surrounded the tournament in scrutinising every single referee call."

The Irish Times' Keith Duggan lauded the play of the All Blacks, especially the attacking flow of the second half, but also singled out the Namibians' tenacity. But he was also fascinated by the brand of the All Blacks.

"Through this World Cup, the All Blacks brand has been more noticeable and high profile than the tournament itself. Their brand and that jersey transcend the sport and there seems to be more Japanese walking around Tokyo with New Zealand jerseys than Blossoms shirts. There was a big local attendance for this game. They wanted to see this phenomenon up close. They wanted to see the Haka. They expected to see an onslaught of dazzling All Blacks try from the beginning, too. But the alternative - the sight of Namibia standing up to the most powerful rugby organisation on earth - won them over after 15 minutes. From then on, all anybody in the stadium wanted was a Namibia try."

The Guardian hailed the efforts of the Namibians.

"Not every inflated Rugby World Cup score line tells the full story and this was a prime example. New Zealand finished up with 11 tries and a comfortable-looking victory but the final margin did scant justice to the efforts of a spirited Namibia side who, for 35 minutes, proved more than a match for their illustrious opponents.

"Their collection of amateurs and journeymen pros - the line-up included farmers, a bank worker and a dentist - certainly did Namibia proud, playing with more pace, intent and accuracy than many of their supposed peers……Sadly for the romantics it could not last indefinitely."

Wales Online, which focuses on a lot of rugby coverage, meanwhile, analysed in pictures every part of the scintillating try by TJ Perenara in the final moments, calling it the try of the tournament so far and describing it as "utterly outrageous".

"The move was rounded off in the corner by TJ Perenara, but it was the scoring pass to him that had ITV commentators drooling with the words 'Oh, the circus has come to town!'."

The Sydney Morning Herald, focusing far more on the Roosters winning the NRL grand final, did take time to say the All Blacks had racked up the highest points in a match at this Rugby World Cup.

"The Kiwis look in ominous form heading into their last pool match against Italy."