Opinion - For the first time since their last World Cup win, the Black Ferns have a complete monopoly on New Zealand test rugby attention right now. 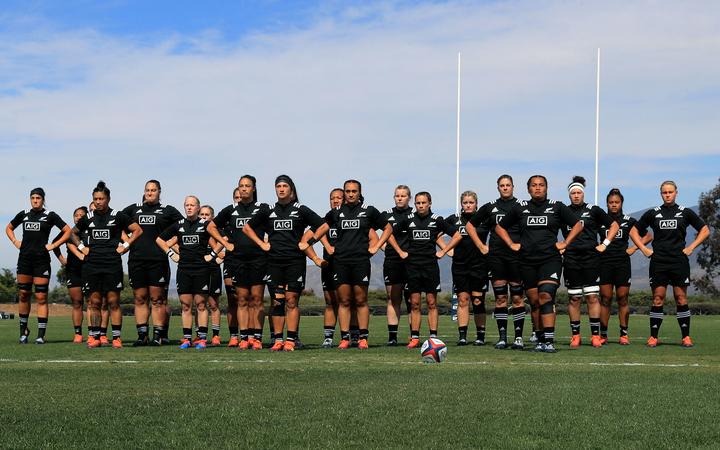 The Black Ferns performing the Haka before playing Canada in their Super Series opener in San Diego. Photo: AFP/Getty Images

They started the Women's Super Series in San Diego with a scratchy 35-20 win over Canada yesterday, and are probably under no illusions that they'll have to play a lot better than that to defeat their other main rivals in the competition.

Those are wins they'll need, because it's a statement that needs to be made amidst the race towards the next World Cup, being held here in New Zealand.

Those rivals come in the form of England and France. The Black Ferns lost their last test against the French on their 2018 end of season tour, and the English are now quite clearly building their squad for the challenge in two years' time. Both programmes also have a lot more money than the Black Ferns.

Because, as much as we like to praise the on field deeds of our female players, that's what the future of women's rugby is going to come down to. This Super Series is going to show us just exactly how close to the World Cup we are.

2017 saw the mostly amateur (their Sevens players have been on the Olympic payroll since 2012) Black Ferns beat a professional English side in the final.

It's fair to say those two sides had an absolutely massive leg up on their rivals given the intellectual property they could tap into in the lead up to the tournament, however, it was quite clear that the Black Ferns simply had far more talented individual players.

While that's probably going to be the case for a while yet given the growing participation rates of girls in junior rugby across the country, it's unlikely that it can be relied upon to guarantee success in a World Cup.

HIGHLIGHTS | The Black Ferns opened up their Super Series campaign with a 35-20 win over Canada in San Diego.

England buried the US 38-5 in their first match yesterday before the Black Ferns match, and showed clearly that they're not simply killing time before the 2021 tournament.

For all the talk of the Black Ferns taking a leap forward last year with central contracting to NZ Rugby, the English and French do possess something that the women's game down in these parts sorely lacks.

Both of them have already played five tests so far this year in the Women's Six Nations Championship, which runs at the same time as the men's one, in front of large crowds and television audiences.

The investment put into the game in the UK and France is starting to really bear fruit and will only keep growing now that it is eventually turning into a sustainable entity.

That's why it's a little sad to see this Super Series being played on what's essentially a training ground in San Diego.

For all the talk of the US being some sort of untapped goldmine for financial growth in rugby, it's clear that for women at least, that's still a bit far off.

The reality of the situation there is that the men's 15-a-side game needs to firmly establish itself as a professional competition through the fledgling Major League Rugby.

The Black Ferns, meanwhile, can only really rely on Australia to provide meaningful competition on a yearly basis.

From what we saw last year, that too is a pipe dream. More concerning is that the state of the game over the Tasman is in complete disarray and if any funding is affected by the potentially crippling Israel Folau saga, it'll be the sort that the Wallaroos are getting.

So while it's highly likely that we'll be seeing a couple more one-sided tests when the two sides meet as part of their double header series with the All Blacks and Wallabies in August, there's also not an awful lot of hope on the horizon for a really competitive kick start to that fixture.

The Black Ferns have a brutal schedule to play in their Super Series tournament, with four matches in only 17 days.

They'll be earning every cent they are getting for the job of pulling on the black jersey, but wins over their closest rivals are going to prove to be an awful lot more valuable over a couple of teams that are only going to get stronger.

*Jamie Wall is a freelance sports writer, specialising in rugby. Over the last two seasons, Jamie has travelled with the All Blacks to Buenos Aires, Sydney, Tokyo, London, Dublin and Rome, and he will be attending the 2019 Rugby World Cup. His first book 'Brothers In Black - the long history of brotherhood in New Zealand rugby' will be available in August.