How old should a child be before they're allowed to bike to school alone?

Wellington primary school Miramar Central says they should be 10 or 11, and has made a rule requiring anyone younger to be accompanied by an adult. And pupils still need the school's permission to bike on their own when they reach Year 6. 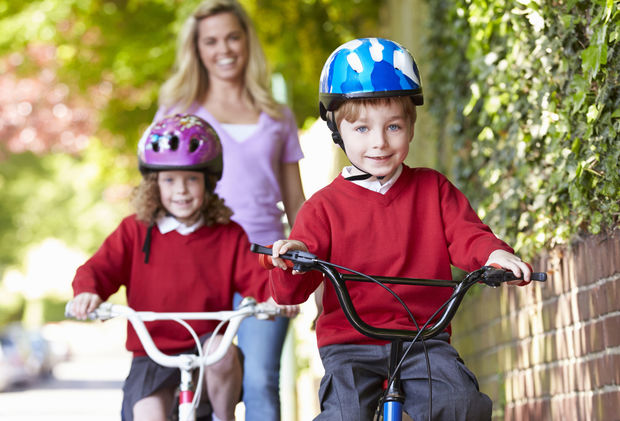 Principal John Taylor-Smith said there was evidence to show children's depth perception did not fully mature until that age.

"I just think it's being responsible - parents have to be responsible and we do too as a school - rules are for reasons and if anyone has an issue we can look at it but right now we stand by it," he said.

"I think it has an added incentive that when children reach Year 6, we say they're ready to ride their bike alone."

He said children who broke the rule were not necessarily punished, and he had never had any complaints from parents.

"Every year we send out masses of what our school policies are and health and safety and this is one of those rules which we remind parents of.

"The kids are also told by their teachers that this is the rule. We don't police it vehemently, but if a pupil turned up at school we would remind them that that's the rule."

Patrick Morgan, who represents the group Cycling Action Network, said it should be up to parents.

"I think that's common sense. Many children, up until that age, don't have the skills to ride by themselves, although there will be some who are competent enough to do so," he said.

"But I'm not aware of any legal basis for a school mandating how children get to and from school."

"Most children are well capable of doing this and letting them do their own trips around the neighbourhood on their bikes helps build their confidence."

Auckland Primary Principals' Association president Frances Nelson said Miramar Central's rule was unusual but maintained it was just as much the school's responsibility as the parents'.

"Most schools have a shared responsibility with parents when it comes to children going to and from school and we are expected to do our best to keep children safe," she said.

"We would be taking advice from the local police education officer around what the issues in the area are."

Government figures show the percentage of children biking to school is at its lowest point ever - just 3 percent of secondary school students and 2 percent of primary school pupils.

New Zealand Transport Agency national cycling manager Dougal List said he was confident that would increase, as the government was pouring $350 million into cycleways.

The agency recommended children be accompanied by an adult until about 10 but there were no laws to that effect, he said.

"Parents know their children well and they know when they have good road sense," he said.

"When you get to a road, are children aware of traffic? Are they looking before they cross? Are they aware of other people on the footpath? These are all good signs of whether a child is ready to travel by themselves."

He said schools were responsible for making their own rules.