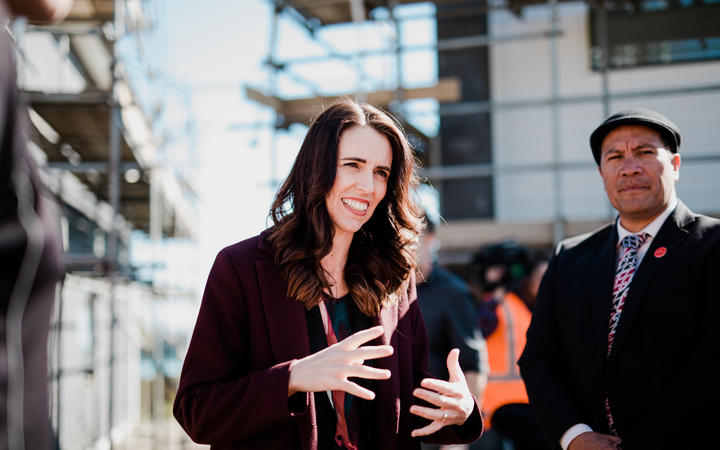 The five-point plan for construction would include the $350m Residential Construction Response Fund announced in August to underwrite KiwiBuild homes, building 18,000 transitional housing places, continuing the $400m Progressive Home Ownership scheme started last year, using the Construction Sector Accord agreed with the industry for stability, and removing barriers to residential construction - including investing in infrastructure and completing reforms on the Building Act.

Ardern says the plan was building on the policies Labour had implemented over the past three years.

"We firmly believe that all New Zealanders have the right to live in warm, dry, healthy homes, whether we rent or own our homes," she says.

"We actually have a very proud record - in public housing in particular - of building more houses than we've seen any government build since the 1970s ... we can't turn this problem around in one term when it took decades to create."

Woods said the government had been using prefabricated building through Kainga Ora going through a lengthy and detailed procurement process with local providers, but some of the types of houses needed international partnership for some of the innovations in prefab housing construction.

"We're continuing to work with local providers but we do need to allow for some of the innovation that has taken decades to develp opverseas to come in as well."

The global financial crisis saw a retreat from building affordable homes, she said, and single homes on a single section were often not an affordable home for first-home buyers, which was why the party brought in the Covid Residential Construction Fund.

"We are prepared to stand beside our sector to ensure that we do see the continuation of those developments, particularly where they do include affordable houses so we don't see that retreat."

Ardern says the Energy Performance Certificate ratings will allow home buyers to make informed decisions about how much it will cost to heat and cool.

"We absolutely recognise that there is a significant issue with housing in New Zealand, but a number of actions are already under way to increase housing supply and get people into warm, dry housing. We have made a great start, and we need to keep moving."

The suggestion to bring the certificates in came from the business advisory council, she said, and more work needed to be done to make sure it was efficient.

Examples from the United Kingdom showed it would cost about $120 per certificate, she said.

"We're starting with those homes that are going on to the market ... our idea here is to try and make sure that we've got a tool that's good for buyers to see whether or not the home that they're purchasing is efficient."

Woods said under the UK model, someone would come visit a house and produce a roughly four-page report going over insulation, heat sources, and other things. She said the Energy Efficiency and Conservation Authority (EECA) was the obvious body to be involved.

Parker reconfirmed Labour was committing to repealing and replacing the RMA, something National and ACT have also committed to.

"In our view the Resource Management Act - which is now twice its original length - takes too long, costs too much for people to go through its proceses, and it hasn't properly protected the environment."

The government's review of the RMA, completed in July, recommended the RMA be replaced by a Natural and Built Environments Act (NBA) and a Strategic Planning Act, and today Parker said a third act piece of legislation for managed retreat and climate change adaptation was also needed.

Labour aims to get all three done within the next three years, he said, starting with the NBA. The climate legislation would be complex, however.

"What sort of funding mechism you use to assist in managed retreat when that becomes necessary in the future, there are various options around that we haven't made decisions on and I think that'll be the most difficult part of the decision work.

"You have to reach a fair point, you're not going to compensate someone who recently buys a multimilion dollar holiday home in an area that is susceptible to erosion. On the other hand someone for whom it's their only home and it's in an area that the council thinks they're not going to be able to support with infrastructure long term, you have to think about how those costs are shared across society."

He said there was already guidance supplied to councils about new builds in risky areas, the problem was more low-lying suburbs built 100 years ago.

In a statement, ACT Leader David Seymour said Labour had been opposed to changing the RMA for years and questioned whether, after the "disaster" of KiwiBuild, anyone would believe Labour could get the job done.

"ACT has consistently advocated for overhauling the RMA. National and ACT had the numbers to do reform between 2008 and 2011 and then again between 2014 and the Northland by-election, but National failed to act.

"Labour was elected to solve the housing crisis, but with even more red tape has made it worse."

Green Party environment spokesperson Eugenie Sage welcomed the RMA reforms but said a Green voice was crucial to ensure the environment was not put at risk.

"During the next government, the Greens will be the voice at the table arguing for strong, science-based environmental bottom lines," she said in a statement.

"We have a chance to create planning laws which promote low-emissions, connected urban centres where people can live and work, and flourishing natural environments. However, we saw in the proposed RMA Fast Track legislation that Labour was willing to deprioritise environmental protections and public input into decisions.

"The reforms must improve environmental outcomes, not just uphold the status quo."

The party's co-leader and housing spokesperson Marama Davidson welcomed the housing policies, but said a clearer focus on community housing was needed.

"The community housing sector, including iwi and hapū housing providers, knows how to build affordable rentals and the next government needs to support them to do that. Labour's Residential Development Response Fund needs to deliver for community providers, not just the private sector," she said.