Business confidence is at its lowest on record according to the Mood of the Boardroom survey, which goes back 19 years. 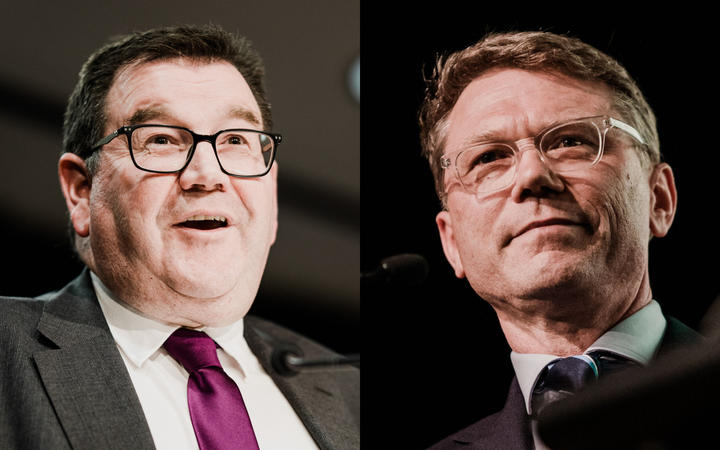 It also found National's tax policy has much more support than Labour's, but Labour's Grant Robertson won a much higher rating than National's Paul Goldsmith.

The annual New Zealand Herald survey of 165 chief executives and directors, taken in association with BusinessNZ, had optimism at 1.36 out of five, the lowest in the survey's 19 year history.

Labour and National's finance spokespeople - Grant Robertson and Paul Goldsmith, respectively - are speaking at a business breakfast to launch the survey this morning.

In a statement, BusinessNZ chief executive Kirk Hope said while the government's economic response had underpinned the economy during the initial response to Covid-19, long-term plans were less well understood.

"National's plans are slightly more pro-business," he said. "But both parties need to talk about how quantitative easing enables them to maximise a reduction in borrowing costs to help grow the economy."

Mood of the Boardroom executive editor and NZ Herald head of business content Fran O'Sullivan said it was heartening that a record number of chief executives had taken part, showing their own commitment to turning the economy around.

The survey showed 48 percent of respondents felt Labour's tax policy - which includes a new top rate of 39 percent on earnings over $180,000 - was not appropriate in the current economic climate, compared to 36 percent who said it was appropriate, with 16 percent unsure.

That compared to 69 percent who thought National's tax policy - which includes $4.7bn in tax cuts - was appropriate for the economic climate, 19 percent saying it was not, and 12 percent unsure.

However, Robertson was rated 4.18, the highest figure in Labour's caucus. He had a high approval rating with 91.45 percent agreeing he had presented himself as a credible minister of finance, just 4.61 percent disagreeing and 3.95 percent unsure. It was the highest rating for any Cabinet minister over any government in the survey's 19-year history.

National's fiscal plan has faced criticism after Goldsmith conceded it contained two errors totalling about $4bn, and Labour has continued to apply pressure, saying errors could total up to $8bn.

The survey also follows the release of GDP figures which show the country in recession, and a pre-election fiscal update (PREFU) which showed a better-than-expected medium term economic position, but a worse-than-expected long-term one.

The government's Covid-19 response was rated 3.59 out of five.

Robertson went on the attack, criticising National over leadership changes, policy changes and the fiscal errors.

"As business people, you should be voting Labour ... off the back of our stable, consistent and careful leadership, there is a contrast. National have been utterly disorganised, chaotic and inconsistent.

"They've been through three leaders in four months, they've had an exodus of 19 MPs ... they have flip-flopped on some of the most important decisions we have had to make on the border, alert levels and the whole elimination strategy ... and now their economic approach is in disarray, with a plan riddled with basic errors."

"They have boxed themselves into a fiscal Bermuda Triangle. We all know you can't have higher spending, lower tax and dramatically lower debt and the holes in their books show it.

"When you're in government you don't get to flip-flop on matters as important as these. It has real life consequences and real life costs. The total cost of the errors in National's fiscal plan is now larger than the estimate for an additional Auckland harbour crossing.

"There is too much uncertainty in the world already at this moment. The last thing you and your businesses need is an unknown, inexperienced, unprepared team being thrust into government and that is what you have with National."

He highlighted Labour as a steady and familiar manager.

"The economic response needs continuity and a steady hand. You know me and you know how I work. And you know we can work together."

Goldsmith said that despite treasury predicting 100,000 lost jobs over the next couple of years, rising deficit and debts and and deep business uncertainty, National had no doubt that New Zealand can overcome it.

"Because New Zealand is a great country, it's a strong economy, we produce things that the world wants to produce, we're entrepreneurial people, we can get back on our feet, the only question is how quickly and it's our strong view that under National's set of plans we'll get back on our feet faster than the alternative."

He rejected Robertson's criticisms over the fiscal plan.

"Grant Robertson will throw all sorts of ideas and spurious claims in order to avoid talking about the substance of plan and the lack of substance in their plan."

He said National's plan was not just a short-term tax cut stimulation, highlighting the plan to double depreciation for plants and machinery spending, and compared that to the Provincial Growth Fund and the fast-tracked "shovel-ready" infrastructure funding.

"We're seeing the merry go round behind that, we've heard Chris Hipkins talk about it was the Greens' turn for their thing, the Green School and $12 million there, New Zealand First got a few projects, Labour got a few projects, and the politicisation of that I think has been what's been holding us back and raising real questions about the quality of that spending."

He said the past three years of government has seen the country going backwards on keeping taxes low, pushing back against the tide of regulation, being consistent about rules and policy, and encouraging foreign investment.

He also compared Labour's plan for light rail in central Auckland with National's plan for four-lane highways between Tauranga, Hamilton and Whangārei.