A "perfectly productive, warm, solid bi-lateral" is how Prime Minister Jacinda Ardern has described her meeting with US President Donald Trump. 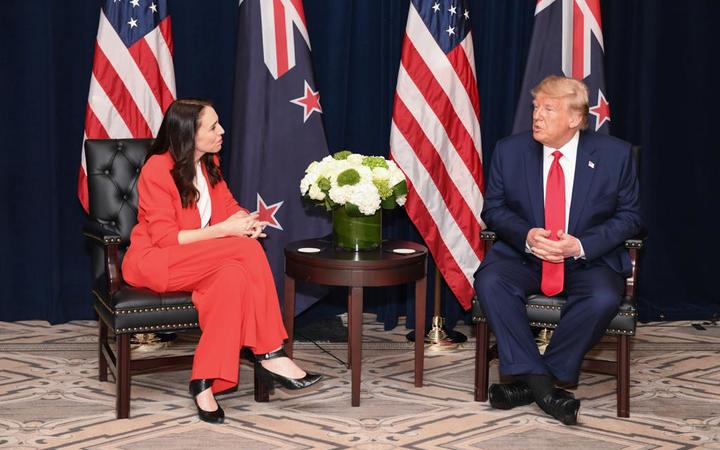 She said the roughly 25-minute meeting at the Intercontinental Hotel, on the sidelines of the United Nations General Assembly in New York this morning, was "excellent", and showed Mr Trump's warmth of feeling towards New Zealand.

Media were banned from attending the first official sit-down for the two leaders, which Mr Trump's schedule described as a "pull aside".

Being in trade surplus with the US was "an acknowledgement" of the relationship that already existed, Ms Ardern told reporters.

"So the idea of continuing a conversation around New Zealand's trade relationship with the United States was greeted warmly. I expect there will be some ongoing conversations ... these things do take time."

When asked about her personal rapport, Ms Ardern talked about Mr Trump's attitude towards New Zealand.

"The knowledge the President already has about New Zealand, the warmth and high regard in which he clearly holds New Zealanders and the place, was really clear, that's a good starting point for any conversation.

How was the handshake? "Standard". 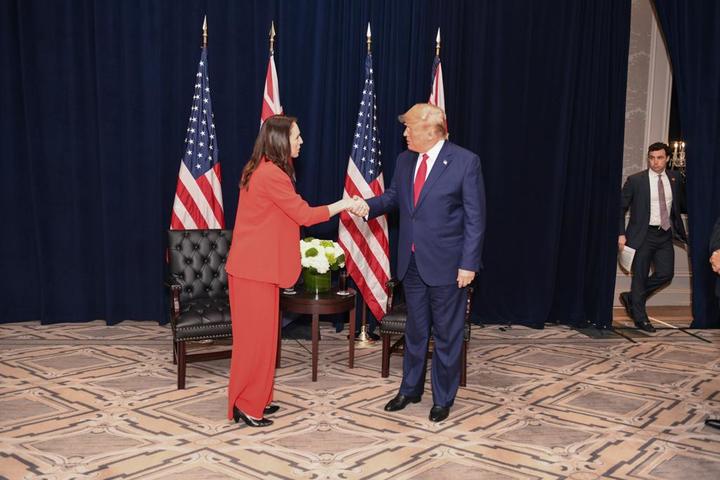 While Ms Ardern acknowledged personal relationships were important in international diplomacy, relationships with countries like the United States, Australia and the United Kingdom "endure beyond political leaders".

"It's part of it, but actually our history is much more long-standing and runs much, much deeper."

The US has not signed up to the Christchurch Call, which Ms Ardern also made an announcement about this morning, but she said it was not raised during their meeting.

However, the 15 March attacks and the gun buyback were discussed.

"How it worked, I referenced the fact Australia had gone through a similar process and we really learnt from that so it was really just sharing our experience which is pretty unique."

The fact the government had achieved near political consensus had "sparked interest among others".

Mr Trump had already met with Farid Ahmed, one of the victims of the March attacks, and the conversation about the gun buy-back was an "extension of his interest".

Ms Ardern said she would not want to "predetermine" whether that meant anything for the United States.

There had been some discussion about the lack of media access, and the meeting's classification as a "pull aside" rather than a more formal bi-lateral.

"We have different definitions of these things, usually based on length. I think in the end we met for about 20, 25 minutes but that will be a reference to whether or not there were media in the room - that was a decision for the United States."

Mr Trump "absolutely" took New Zealand seriously, Ms Ardern said, noting he was only holding about six other bi-laterals with other world leaders during the UN General Assembly.

When asked if she had invited Mr Trump to New Zealand, she said there would be an opportunity for him to visit when APEC is hosted here in 2021.

She earlier had a "very, very good" meeting with British Prime Minister Boris Johnson, where they once again talked trade, "reinforcing" the conversation Ms Ardern had with him previously to progress a deal with New Zealand once the United Kingdom has left the European Union.

Climate change is the dominating focus of the General Assembly and Ms Ardern described the UN Climate Summit she opened this morning as "powerful".

"Those who were in attendance by default, there is an acknowledgement of the urgency, probably we need to think more broadly around those who aren't participating in the climate conversations and in the urgency that needs to exist - those are the ones who really need to hear those messages.

She "briefly" mentioned the Summit in her meeting with Mr Trump, but told reporters it was "not a long discussion".