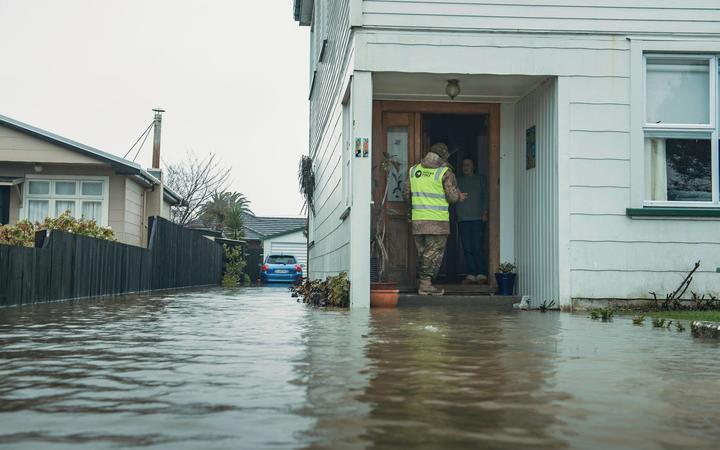 The Marlborough District declared a local state of emergency this afternoon and residents in the Lower Wairau, Spring Creek township and Lower Terrace in Renwick have been advised to evacuate.

Residents have been asked to stay with family or friends for the next 24 hours as the water is breaking the stop bank at Conders Bend.

Twenty five rural properties further north have also been cut off when the Bartlett's Creek bridge washed out.

About 20 roads in the district are also closed because of flooding, slips and downed trees.

Buller Emergency Management is also evacuating several more streets in Westport as the Buller River rises. More than 800 people in Westport were forced to evacuate last night and they have not been allowed back to their homes.

The Defence Force, police and emergency teams are door-knocking in the affected areas to speed evacuations.

Residents are being told to take their emergency supplies and flee to friends or family on higher ground. 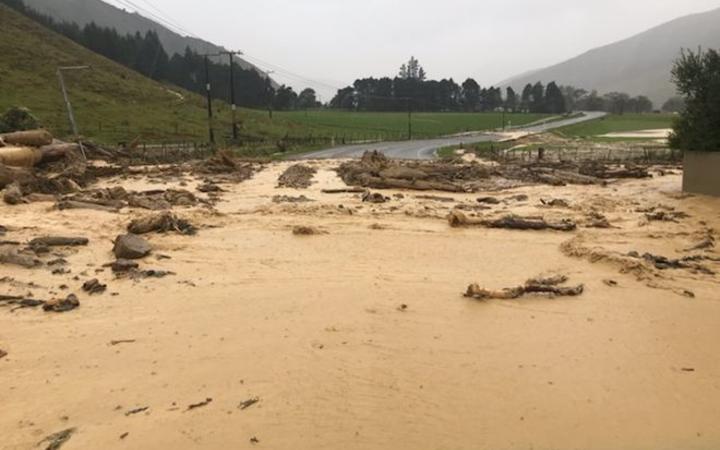 Region emergency controller Bob Dixon said plans were in the works for evacuees to return home.

Wild weather: What you need to know

"Presently monitoring river levels - they are still extremely high. We're just waiting to see what homes may have water in them. We certainly know there are properties that have water around them.

"Our plan presently is that we are looking at homes that have escaped any water entering the properties and we'll start to progressively get those folk to return home." 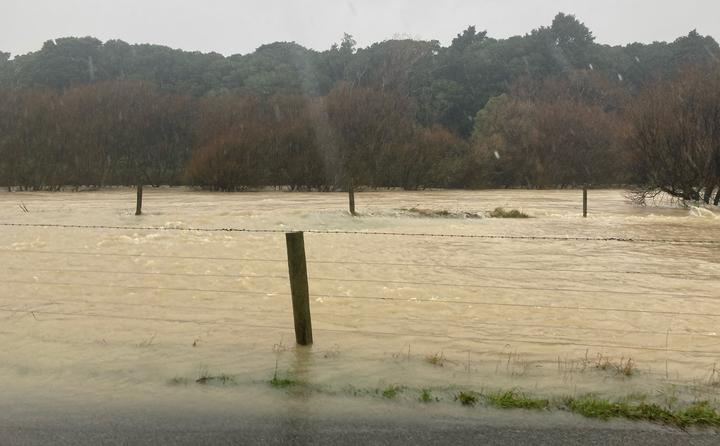 Civil Defence has issued a water conservation notice for the townships of Westport and Carters Beach.

She said more rain is falling in Nelson and Marlborough and there could be further road closures as river levels and rain peak.

People in Westport were also being asked not to go out driving around looking at damage because they could send water into homes.

The Buller River has inundated the main road in to Westport through the Buller Gorge and the road connecting the town to Greymouth is also closed due to slips. The Buller Bridge was closed this afternoon.

The Matakitaki River in Murchison has breached its banks. Photo: Supplied / Alex Graydon

It was hoped the road in to Hanmer can reopen today, but the highway between Hanmer and Springs Junction remains closed, also due to slips.

Further south, road crews are working hard to clear a slip which has closed the road connecting Greymouth and Christchurch over Arthur's Pass.

Waka Kotahi said the Tasman District, the West Coast, including Buller District, Marlborough and Canterbury all have state highway closures, with SH6, SH60, SH7, SH65, SH63 and SH73 all closed at various points. 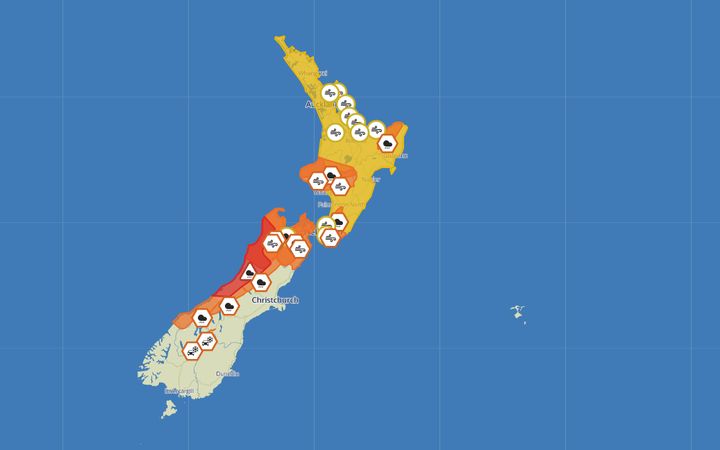 The red warning for heavy rainfall in parts of Westland and Buller will last until 3am. Photo: MetService

Fire and Emergency have rescued three different groups of motorists who were trapped by floodwaters in the Nelson Tasman region.

One crew in Murchison was able to get a person off the roof of their car via a front end loader. Another motorist in Hamner also needed assistance, while near Mokueka a helicopter was used to collect a driver who was unable to be reached by ground crews because of the water.

A homeowner living next to the Orowaiti River just north of Westport faces a nervous wait to see if her house has been flooded.

Ruth Vaega and her husband fled their home this morning when they saw the river was getting close to breaching.

Their house has been raised off the ground after being flooded in 2018, and they are hoping this prevents the water coming inside this time.

She was feeling dejected and tired after a sleepless night worrying about whether their home would flood.

She was staying with friends north of Westport and did not know when they will be able to return home.

Buller Mayor Jamie Cleine said four of the seven shelters were full and there was currently no way out of the township by road.

"The Buller Gorge is closed now with river over the road in various places. The coast road south to Greymouth is closed with slips. So we're locked in."

Cleine said it had been a long night for officials monitoring the West Coast floods.

Buller Emergency Management, in a social media post said: "The decision to evacuate was made because the Buller River received an extreme amount of rainfall over the last 24 hours and is still extremely high.

There is still a large amount of water in the ranges to make its way down the Buller River.

"We ask people to stay away from their homes while the risk remains. We will let you know when it is safe to return home."

A climate station in the Hokitika catchment has recorded 622 millimetres of rain, in the 42 hours to 10pm last night.

Niwa says the reading at Cropp Waterfall is equivalent to 51 percent of Auckland's normal annual rainfall.

Here's todays brief video update for the RED WARNING area in Buller, with more rain coming in through today. Stay safe everyone. https://t.co/Yjbq0jfCz1 for more info.

He said it was a strong front lying across northern Westland and Buller.

"That is very exceptional, what we have see over the last 60 hours across much of the West Coast and Buller. It's been really persistent, extremely heavy rainfall. Just in the last 24 hours, we've seen numerous stations through these regions reporting upwards of 250-300mm of rain."

Niwa said 733mm of rain was recorded at Tuke Hut in the West Coast - 119 percent of Christchurch's annual average rainfall.

Flood levels at the station were now the highest since the major flood of 1926, Niwa said in a tweet.