A close eye is being kept on the Buller River, with heavy rain and flooding sparking a state of emergency. 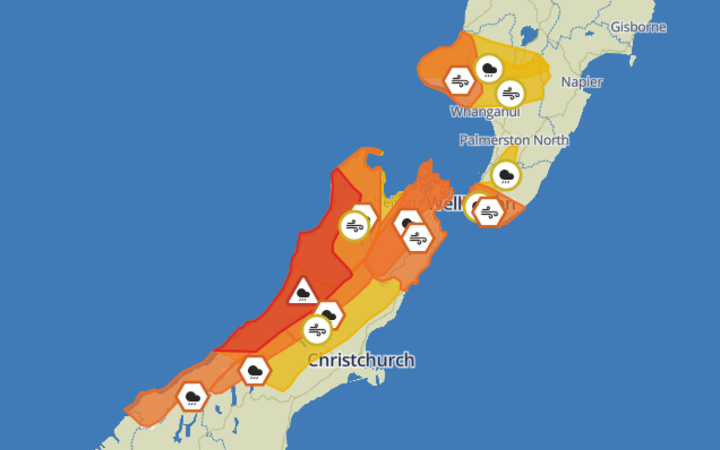 In a 1-in-50-year event, residents in low-lying or flood-prone areas are being told to prepare to evacuate.

Buller District Council has already declared a State of Emergency and says houses are likely to flood tonight, after a rare 'red warning' was issued for parts of the South Island.

Strong winds and heavy rain has been hitting the area today.

Buller Mayor Jamie Cleine said they wanted people whose property is prone to flooding to starting making plans to evacuate now as the houses are likely to flood later tonight.

He said the Buller River is currently running at a 50 year flood level, and it is tracking towards a once in 100 year event.

"The key risk area is overnight, so with the river's already running high we've got another 200-280 millimetres of rain forecast in the next 36 hours so it's highly likely that the river will continue to rise."

He said the state of emergency declaration will allow emergency services to swing into action as they start to look at areas which may need to be evacuated later today.

The West Coast Civil Defence is asking people at the Gladstone and Russell streets intersection and nearby areas, and those who live on Colvin, Rintoul, Menzies, Roebuck, Bentham, and Disraeli streets, or in the Westport Domain Area, to voluntarily evacuate.

An evacuation centre have been set up at South School.

The crunch could come at tomorrow's 3.40am high tide.

MetService issued the 'red warning', just the third issued since 2019, and earlier this morning said the heavy rainfall could bring significant flooding and the risk of slips from central Westland to Buller.

"A red warning is in force for significant heavy rain from central Westland to Buller. Flooding is likely, as are slips and disruption to transport. Some communities could become isolated, and livestock should be moved to high ground," it said.

It also said up to 400mm of rain in the ranges, and 200mm on the coast, is expected to fall through to Saturday morning.

ICYMI: A Red Warning is active for Buller and Westland north of Fox Glacier
Some stations have already measured over 140mm of rain in the last 12hrs, with plenty more to come

Be sure to follow the advice of your regional councils. Stay up to date at https://t.co/qHyE5zhh6X ^MM pic.twitter.com/JYCqwCTONH

Meanwhile, several roads in the South Island are affected by the heavy rain today, including State Highway 73 through Arthur's Pass which is closed.

On the West Coast, State Highway 73 is closed between Otira and Kumara Junction due to a slip, and a detour is in place.

State Highway 7 at Omoto has also been closed by a slip.

State Highway 6 on the West Coast near Inangahua has been closed due to high river levels.

All of State Highway 6 south of Hokitika to Haast had surface flooding in places.

The highway was also closed between Lake Hawea and Makaroa this morning due to a slip, but that has been cleared and the road reopened.

The Transport Agency said they have teams monitoring road conditions along the West Coast and the top of the South Island.

Earlier, Meteorologist Karl Loots said there had been persistent rain overnight in the Buller and Westland districts, but it was to get heavier from this morning.

He said the rain may cause surface flooding, slips and river levels to rise quickly.

Westland Mayor Bruce Smith is advising people to think about where they'd go if evacuations were needed later.

Earlier, he said there would definitely be flooding and slips in the region over the next 24 hours and people should prepare for possible power outages.

Smith said it's likely to be worse for the northern part of the West Coast.

He said people should stay off the roads unless it was necessary.

Northerly gales and heavy rain were also being forecast for other parts of central and southern New Zealand.