At least 80 people have died and hundreds more are unaccounted for in Germany after some of the worst flooding in decades. 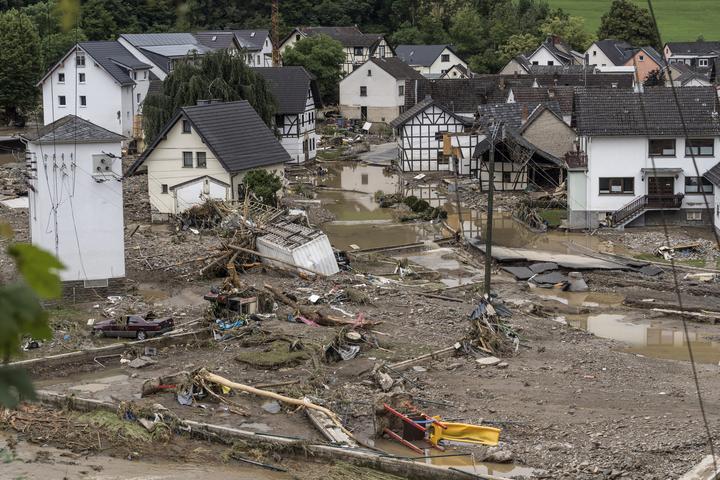 Belgium has also reported at least 11 dead after the extreme weather, which political leaders have blamed on climate change.

Armin Laschet, the premier of North Rhine-Westphalia, blamed the extreme weather on global warming during a visit to a hard-hit area.

"We will be faced with such events over and over, and that means we need to speed up climate protection measures... because climate change isn't confined to one state," he said.

Experts say that climate change is expected to increase the frequency of extreme weather events, but linking any single event to global warming is complicated.

The German states of Rhineland-Palatinate and North Rhine-Westphalia were worst hit, but Belgium and the Netherlands are also badly affected, with further flooding in Luxembourg and Switzerland. 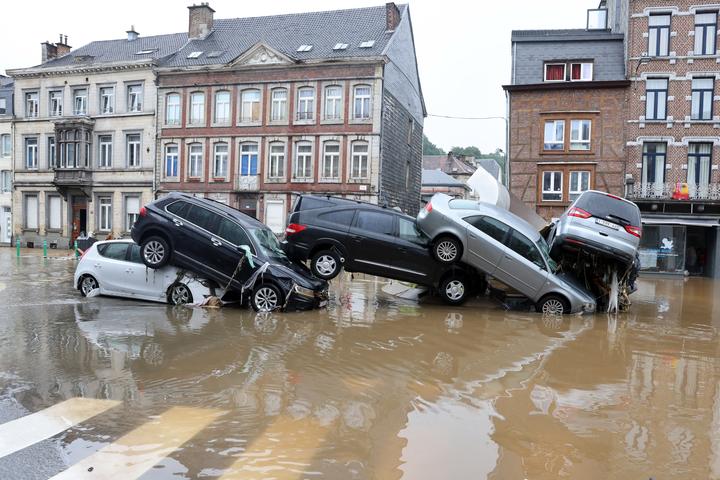 Cars piled up in floodwater in the Belgian city of Verviers on 15 July. Photo: AFP

In the district of Ahrweiler, hundreds of people are unaccounted for, the authorities say. A spokeswoman for the local government said mobile networks had been put out of action, making it impossible to contact many people.

The village of Schuld (population 700) was almost entirely destroyed.

Some 15,000 police, soldiers and emergency service workers are at the scene to aid with search and rescue, while helicopters picked stranded residents from roof tops and tanks cleared roads of fallen trees and debris.

Residents in the region told AFP news agency they were stunned by the disaster.

"Nobody was expecting this - where did all this rain come from? It's crazy," Annemarie Mueller, a 65-year-old resident of Mayen, said. "It made such a loud noise and given how fast it came down we thought it would break the door down."

Speaking during a meeting with US President Joe Biden in Washington DC, Merkel expressed her "deepest condolences" to everyone across the region who had lost loved ones after "a day of worry and despair".

"I fear we will only see the full extent of this tragedy in the coming days," she said. She also pledged government support with rescue efforts and with reconstruction, saying to the German people that the government "will not leave you alone in this difficult, terrible hour".

In Belgium, dramatic footage of the floods showed cars being swept away along a street in the city of Verviers.

Residents of Liège, Belgium's third-largest urban area after Brussels and Antwerp, were ordered to evacuate. Local officials said those unable to leave should move to the upper floors of their buildings.

The Meuse river which flows through the city is expected to rise by another 1.5 metres, despite being on the verge of overflowing already. Officials are also concerned that a dam bridge in the area may collapse and urged people to help each other.

"The crisis situation is exceptional and solidarity must prevail," the local authority said in a statement.

Belgium's King Philippe and Queen Mathilde visited a crisis centre in Chaudfontaine, southeast of Liège, set up for affected residents.

In the Netherlands, King Willem-Alexander and Queen Maxima inspected damage in Valkenburg, close to the Belgian and German borders, where flooding engulfed the town centre and forced the evacuation of several nursing homes.

The country has reported no casualties but thousands of people in towns and villages along the Meuse river have been urged to leave their houses quickly.

In the Dutch city of Maastricht, 10,000 people were ordered to evacuate.