A few hundred people gathered to catch a glimpse of Prince Charles and Camilla at the Waitangi Treaty grounds in Northland today. 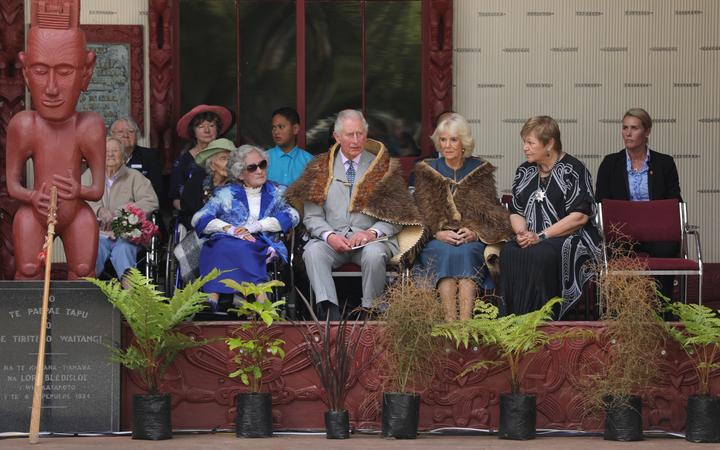 The Prince of Wales and Duchess of Cornwall at the Waitangi grounds. Photo: RNZ / Simon Rogers

The crowds were treated to glorious sunny weather in contrast to a wet start to the week at Mt Roskill in Auckland.

The Prince of Wales and Duchess of Cornwall were greeted by the chair of the Waitangi National Trust Board and the chief executive of the Waitangi Treaty Grounds before paying their respects at the William Hobson Memorial.

The pōwhiri consisted of three wero, where a dart was placed on the ground in front of the entourage for each.

Kaumātua explained the stages of the pōwhiri to Prince Charles as it progressed and instructed him to take the final dart from the warrior's extended arm.

The prince maintained a serious and respectful tone for the duration of the pōwhiri, which was performed by about 100 people.

The crowd created a path for the Prince to walk through towards Whare Rūnanga, while they performed the haka.

After a second waiata by local school children and speeches from kaumātua, Prince Charles made a speech.

He greeted the crowd in Māori and said it was his and Camilla's pleasure join them in "this place of significance".

He acknowledged those who met, debated, challenged and made new commitments in the grounds.

Prince Charles acknowledged the wrongs that had been committed in New Zealand's past. This comes after the British High Commissioner Laura Clarke gave an expression of regret last month to three iwi over the deaths committed by Captain Cook's crew, on behalf of the British Government. 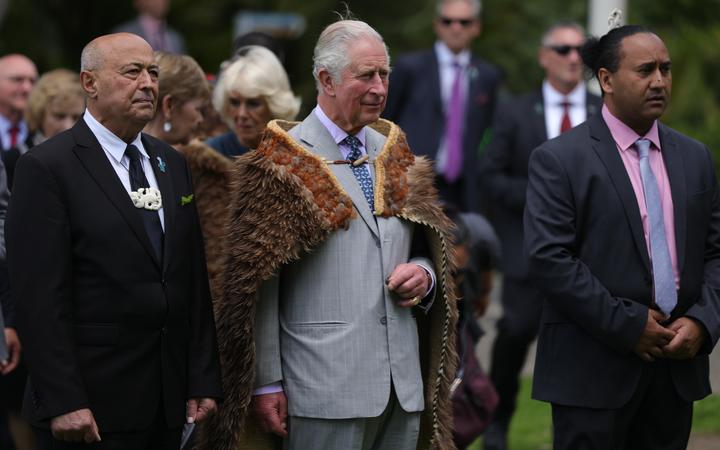 He recalled his first visit to the grounds about 40 years ago. He was glad Camilla was able to visit this time and expressed how thankful she was to visit the "remarkable place".

On his last visit, he noted New Zealand's steps to settle historical grievances under the Treaty of Waitangi.

"For as long as I've known this country and her people, I have been deeply struck by the commitment of New Zealanders to do what is right, even when it is not easy.

"She has done so with courage, passion and tolerance," which he said were well known traits of New Zealand.

He reaffirmed his, his children and grandchildren's commitment to the Treaty agreement.

He said he was greatly appreciative for the recent announcement for history to be taught in all New Zealand schools.

Prince Charles planted a pōhutukawa tree near the whare and greeted members of the public.

After a reception with Māori communities, the Prince of Wales and Duchess of Cornwall toured the Waitangi Treaty Grounds, including a viewing of waka and a tour of Te Kōngahu Museum of Waitangi.

At the museum, Prince Charles and Camilla were invited to wash their hands, spritz their head and touch a piece of pounamu.

To mark the end of the tour, the Waitangi National Trust presented the royal couple with a hand carved tewhatewha as a taonga representing the bonding of Māori and the Crown. It was carved with a human at the top; one side with a Māori figure and the other a Pākehā. The tewhatewha was embellished with paua, pounamu and feathers.

Then in the afternoon Prince Charles and Camilla went to separate events around Paihia and Kerikeri.

The Duchess of Cornwall met with students at Kerikeri Primary School.

She was greeted by three young kaikaranga at the school as they welcomed her into the grounds.

She was guided around the gardens by the principle while talking to students. The gardens are part of the Enviroschools programme and Garden to Table, where students grow vegetables and fruit and then learn how to cook and use them.

"You're doing a really good job, the garden looks magnificent", she told the students.

As she was walking around she had a few pats with the school's therapy dog, Meg, who reads with the children in the library to help them get over their fears of reading.

To commemorate her visit, she planted a tree at the top of a small mounded garden, which will now be named the 'Duchess Garden' at the school. A hose was then gifted to the school by her.

The students, their parents and other people at the school were visibly excited about her visit saying they couldn't get over how relaxed she was.

"We were all very anxious about her visit, but she was so relaxed, which mean so were the students, it went so well," one of the teachers said.

One of the kaikaranga, a nine-year-old, said that although she was nervous, she was glad she could give her a proper welcome as she should have on this whenua.

"This is our whenua, therefore she must receive a karanga wherever she goes."

The Prince and Duchess will now travel to the South Island to continue their New Zealand tour.

- Māni Dunlop from RNZ and Caroline Williams from Stuff