Prince Charles and the Duchess of Cornwall have begun their seven-day tour with a wreath laying ceremony at the Mt Roskill War Memorial in Auckland. 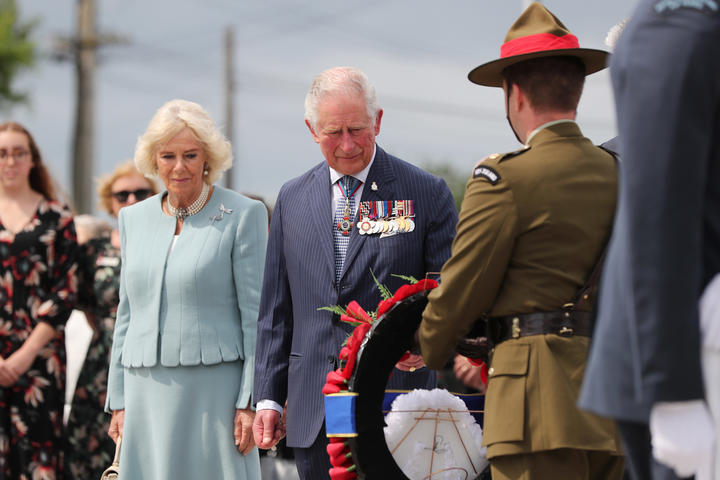 Prince of Wales is given the wreath to lay as Camilla, Duchess of Cornwall looks on at Mt Roskill War Memorial Park. Photo: AFP

The couple then went on to the Wesley Community Centre where a group of dancers performed for them.

The Prince could be seen tapping his feet as both Charles and Camilla smiled as the dance group performed in front of them.

Taking a seat on the floor, the dance group quickly burst into song as dozens of people inside the gym embraced the group.

The Duchess was presented a necklace after the performance by a young girl who embraced her in a big hug - much to Camilla's delight. 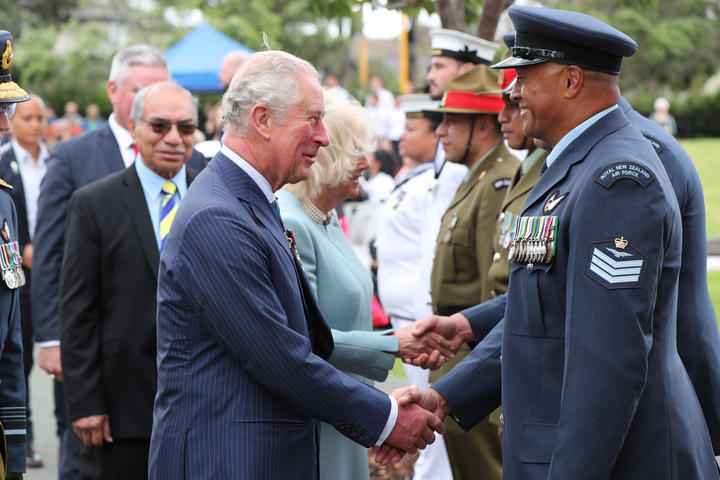 Prince Charles and the Duchess of Cornwall meet members of the military and public after laying a wreath at Mt Roskill War Memorial Park. Photo: AFP

Earlier the pair toured the centre and met community groups who use it.

The Prince walked through the centre, talking briefly with a number of organisations, including Creative Collaborative Customs.

The Prince spoke quietly, engaged in each conversation before quickly moving on.

Prince Charles was gifted a printed white tee-shirt from Creative Collaborative Customs, which he was thankful for but unsure whether he'd fit it - sharing a chuckle with workers.

Then he was invited to create a printed shirt for himself, and given a hands-on run-through of what to do.

Moving on, Prince Charles talked with staff from RYZ FM who even played a Bob Marley track for the royal on his request.

A spokesman from RYZ FM said Prince Charles was the first royal he had met.

"He was easy to talk to and said a lot in a short period of time. We even talked about house prices."

Elsewhere, Camilla sat at a table with young children making arts and crafts.

The Duchess of Cornwall created a Christmas ornament - it was pink with yellow feathers and dazzling glitter.

"You're an expert," she was told by her instructor. 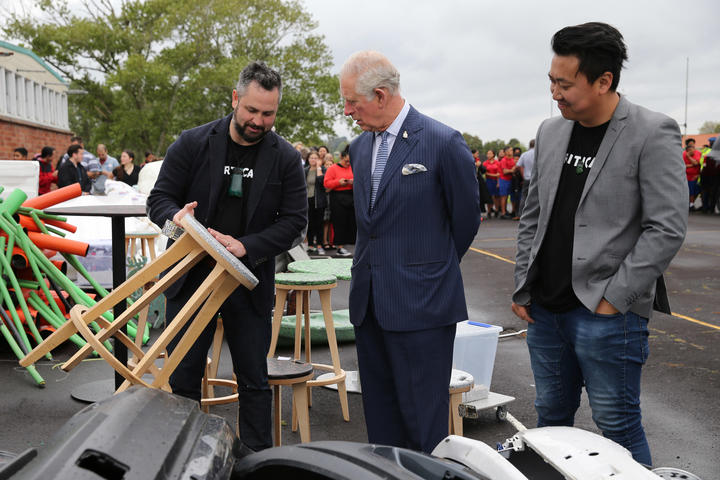 The enterprise is located on the site of Wesley Intermediate, where students gave the Prince a spine-tingling haka to welcome him.

Prince Charles was invited to create something for himself, placing shredded plastic into moulds.

"You're quite good at it," a staff member said. "Are you looking for a job?"

The joke caused Prince Charles to smile and chuckle.

After finishing the moulds, he placed them beside a pie warmer to be heated up, causing the shredded plastic to melt and form together.

Next, they moved him onto a press where the Prince was given another hands-on experience and given control of the lever.

The shredded plastic which came from drinking straws was turned into a puzzle piece.

Mr Davis said it's a special time for the community and for him, because of his family history with the royals.

"One of my ancestors was Queen Victoria's godson, it's not a well known fact that she had a Māori godson and I'll have an opportunity up in Waitangi to discuss that with the Prince, a couple of minutes I guess."

Mr Davis said the christening gown that his ancestor, Albert Victor Pomare, wore was a gift from Queen Victoria.