Domestic violence services, conservation and education are all on the list for the royal tour. 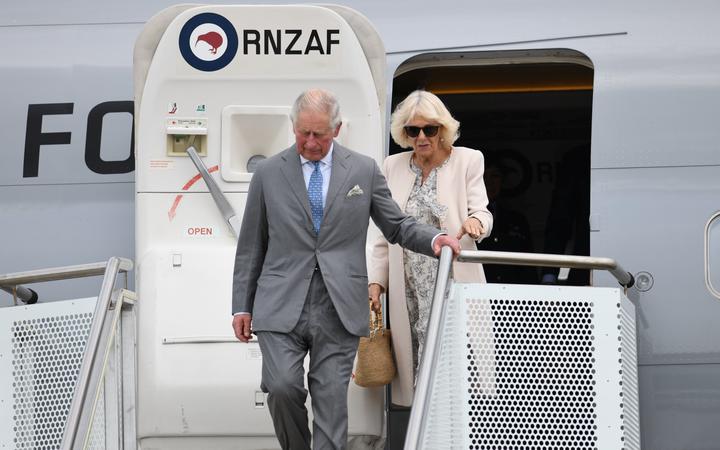 Prince Charles and the Duchess of Cornwall arriving in Auckland yesterday. Photo: Supplied

The Prince of Wales and the Duchess of Cornwall will spend a week travelling the country from Waitangi to Christchurch.

It begins today with a wreath-laying ceremony at the Mt Roskill War Memorial in Auckland which is customary for the royals.

They will then visit various locations in the city, including the Wesley Community Centre and Hunting Lodge Vineyard in Waimauku.

Tomorrow will bring more variety, with the couple splitting up to focus on issues close to their hearts.

In the morning, they will have a private audience with Prime Minister Jacinda Ardern and National Party leader Simon Bridges.

The Duchess, Camilla, will make a trip to Shine, a domestic violence service provider that helps thousands of victims each year. She has long-championed the rights of rape, sexual abuse and domestic violence victims in the United Kingdom and around the world.

Prince Charles will meet with Sea Cleaners, an organisation dedicated to the protection of New Zealand's coastline and marine life.

Since its establishment in 2002, Sea Cleaners has collected more than 85 million pieces of rubbish from the sea and coast.

The couple will then meet up at Auckland's Wynyard Quarter, where they will greet the public and Emirates Team New Zealand.

Later, the Duchess will host a Women of the World afternoon tea, while Prince Charles attends a tea for the Prince's Trust New Zealand.

The trust focuses on supporting young people to realise their potential through education, and create startup businesses.

Wednesday is the most significant day for the couple as they visit the Waitangi Treaty Grounds.

It's been 25 years since any royal has visited Waitangi, and is the first visit since the Crown's 'expression of regret' for the events of Captain Cook's first landing.

While they are there, the pair will plant a tree and walk through Te Kōngahu - the Museum of Waitangi.

Later in the day, the Duchess of Cornwall will visit Kerikeri Primary School where she will meet students and learn about the 'Enviroschools programme.'

The programme encourages children to design and lead sustainability projects in their local community.

On Thursday, Prince Charles and Duchess Camilla will take a well-deserved break before jetting off to the Garden City on Friday.

The pair will also visit Cathedral Square, and the Prince of Wales will inspect the site of the Christchurch Cathedral.

Later, the Duchess will visit the Battered Women's Trust, which has been running since 1976 and offers long-term support for victims of domestic violence.

She will also visit the botanic gardens and meet employees there.

While this happens, Prince Charles will travel to Kaikōura where he will visit Takahanga Marae, go on a public walk and meet an endangered sea bird.

The bird, known as Hutton's Shearwater, only breeds in Kaikōura and is the only known seabird in the world to breed in an alpine environment.

It is considered to be a conservation success story, which will be discussed when the Prince meets Department of Conservation staff and volunteers.