Mass protests in Hong Kong are continuing into their tenth week, with clashes between pro-democracy supporters and police bringing the city's international airport to a halt again on Tuesday. 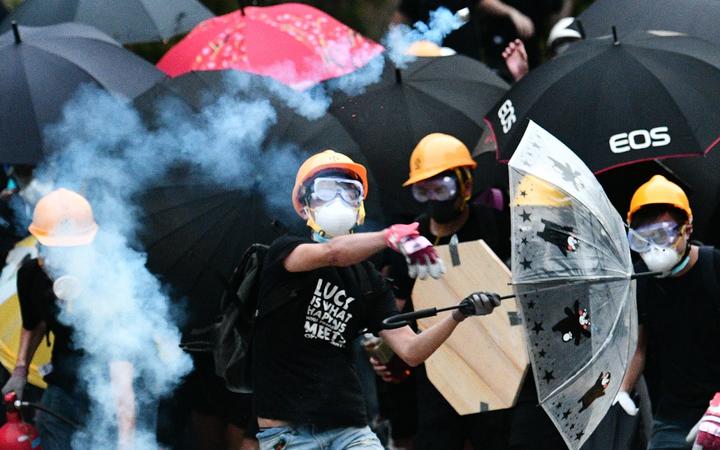 The protests were sparked by a controversial extradition bill, which is now on hold.

In Auckland, residents had mixed reactions to the situation in Hong Kong.

University student Chris Zhang said he was with the government.

"I think if they [the protesters] have a good job and they have a satisfying life, nobody would start a protest. There are many good people in Hong Kong. They have a good life, so they're not as aggressive as those young people who [are] unsatisfied with the status quo in Hong Kong."

He was not alone in his stance - retiree Kong Qingyun, who has lived in Auckland for more than a decade, said young people in the city had been used by forces outside China.

"The thugs deserve strict punishments. Hong Kong needs to restore its prosperity, and continues to prosper," she said.

Lily Wang, who works in Auckland, said some western media reports on the events in Hong Kong weren't balanced.

"They reported things that are advantageous to protesters, but they didn't talk about other things that have happened - for example, there were casualties on both sides, and some people seemed to have been protesting but their actions actually had a trace of terrorism."

Another woman, who didn't want to be named, said she understood where the protesters were coming from.

"The changes on the law and political system are a big shock to people in Hong Kong. It was said that there will be no change for 50 years, but I think changes have happened to Hong Kong subtly," she said.

"Their speech should be respected. People should be able to enjoy the freedom of speech, and enjoy human rights freely."

Chen Xi, who was from mainland China and worked in Auckland, said she wouldn't take sides, but opposed violence.

"You can fight for your rights in peaceful ways, but you have disrupted other people's life and even threatened other people's normal life. The government should listen to people, rather than just refuse and resist the other party."

Judy An, who moved to Auckland from Hong Kong 10 years ago, said it's not surprising that freedom-loving people in the region would do something after the extradition bill was brought up.

However, she said there was miscommunication between the government and the people.

"I respect making changes to the extradition law, but I think someone has exaggerated the impact. It was good at the beginning - a very conscientious rally, but the nature [of it] has changed later on. I think as long as they start talking to each other, all issues can be resolved. After all, Hong Kong is part of China."

In a statement this week, China's Hong Kong and Macau Affairs Office said they condemned what they called terrorist-like actions after the clashes at the international airport.

Meanwhile, Hong Kong is bracing for more mass protests over the weekend as China warned it could use its power to quell demonstrations.

Hundreds of armed police have been conducting exercises at a sports stadium in Shenzhen which borders Hong Kong.

China's ambassador to London Liu Xiaoming warned the government would not sit on its hands and watch while protesters showed "signs of terrorism".

The Civil Human Rights Front, which organised million-strong marches in June, has scheduled another protest for Sunday.