Hong Kong airport authorities worked to resume flights after a shutdown it blamed on demonstrators, while China said anti-government protests that have swept the city had begun to show "sprouts of terrorism". 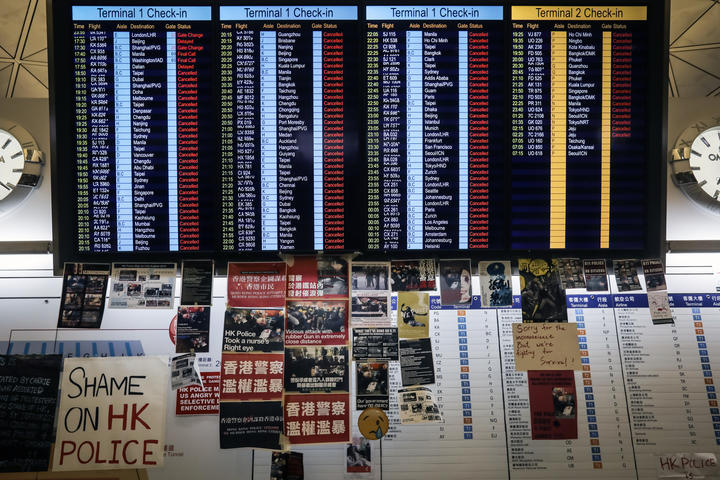 The airport authority said it was working with airlines to resume flights from 6am on Tuesday, but the developments raised the stakes sharply after a weekend of skirmishes during which both activists and police toughened their stances.

The precise trigger for the airport's closure was not clear, since protesters occupying the arrivals hall for four days have been peaceful. Most of them had left shortly after midnight, but around 50 remained, discussing their next move. 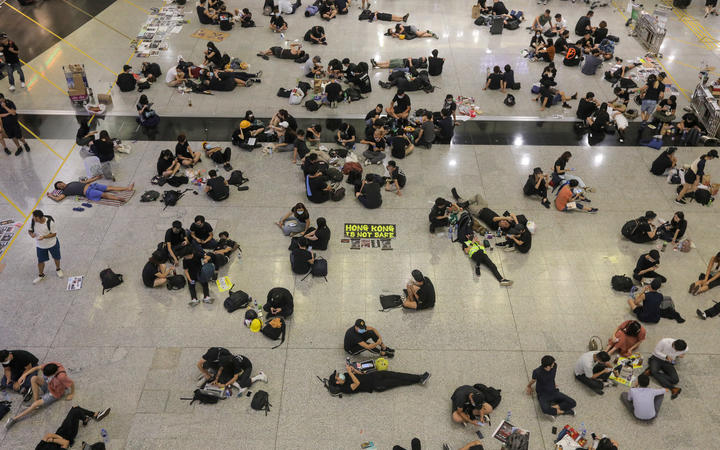 Protesters sit on the floor of the arrivals hall of Hong Kong's international airport. Photo: AFP

"This is about our freedom," a 24-year-old protester wearing a mask, who gave his name only as Yu, told Reuters during the evening. "Why should we leave?"

Some Hong Kong legal experts say official descriptions of some protesters' actions as terrorism could lead to the use of extensive anti-terror laws and powers against them.

China's People's Armed Police also assembled in the neighbouring city of Shenzhen for exercises, the state-backed Global Times newspaper said. The Communist Party's official People's Daily newspaper said on the Twitter-like Weibo that the force can handle incidents including riots or terrorist attacks.

Hong Kongers responded by taking to the streets again.

Crowds picketed a police station, singing hymns. Hundreds of people returned to a subway station, where police had hit activists with batons, to protest against heavy-handed tactics.

The increasingly violent demonstrations have plunged the Chinese-ruled territory into its most serious crisis in decades, presenting Chinese leader Xi Jinping with one of his biggest challenges since he came to power in 2012.

"Protesters have been frequently using extremely dangerous tools to attack the police in recent days, constituting serious crimes with sprouts of terrorism emerging."

The protests began in opposition to a bill allowing extraditions to the mainland for trial in Communist-controlled courts, but have widened to highlight other grievances, winning broad support.

Demonstrators say they are fighting the erosion of the "one country, two systems" arrangement enshrining some autonomy for Hong Kong when China took it back from Britain in 1997.

'The world is watching'

Hong Kong is the world's busiest air cargo port and the 8th busiest by passenger traffic, handling 73 million passengers a year. The airport has been filled with anti-government protesters for four days.

The mostly young black-clad protesters have chanted slogans such as "No rioters, only tyranny!" and "Liberate Hong Kong!" while approaching travellers with flyers describing their demands and explaining the unrest.

US Senate Republican leader Mitch McConnell said they were "bravely standing up to the Chinese Communist Party," and that a violent crackdown would be completely unacceptable.

"The people of Hong Kong are bravely standing up to the Chinese Communist Party as Beijing tries to encroach on their autonomy and freedom," Mr McConnell wrote in tweet on Monday. "Any violent crackdown would be completely unacceptable ... The world is watching."

Canadian Prime Minister Justin Trudeau said he was extremely concerned about events in Hong Kong and urged Chinese authorities to handle the protests there with tact.

The activists at the airport have been polite and passengers mostly unperturbed. "I was expecting something, given all the news," one arrival, Gurinda Singh, told Reuters. "I'm just pleased my plane arrived and the protests here seem peaceful."

Some activists moved to the departure area and caused disruptions, police told a news conference as the cancellations were announced.

Earlier in the day, police declined to say if they would move to clear the demonstrators. There was no visible police presence in either the departure or arrivals area.

"Airport operations at Hong Kong International Airport have been seriously disrupted as a result of the public assembly at the airport today," the city's airport authority said in a statement, without elaborating.

Malaysia Airlines said it would be cancelling its flights between Malaysia and Hong Kong until Tuesday afternoon.

Demonstrators threw up barricades across Hong Kong at the weekend, as police fired tear gas into crowded underground train stations as well as rubber bullets and pepper pellets at close range.

In response, protesters have sought to channel a Bruce Lee maxim: "Be water," employing a flash-mob strategy to frustrate authorities and stretch their resources.

Still, scores of protesters were arrested, sometimes after being beaten with batons and bloodied by police.

One young female medic was hospitalised after being hit by a pellet round in the right eye. Demonstrators were also angered by the use of undercover police, dressed as protesters.

Hundreds of people returned on Monday to the scene of some of the clashes to protest against the use of force.

China has used the threat of terrorism to justify tough measures in its regions of Xinjiang and Tibet, which have been criticized by rights groups and Western governments. It warned them off on Monday as well.

China has also put pressure on big companies, such as Cathay Pacific Airways, whose shares tumbled to a 10-year low on Monday after it was told to suspend staff engaged in illegal protests.