Hong Kong International Airport has cancelled departing flights, as anti-government protests in its main terminal continue for a fourth day. 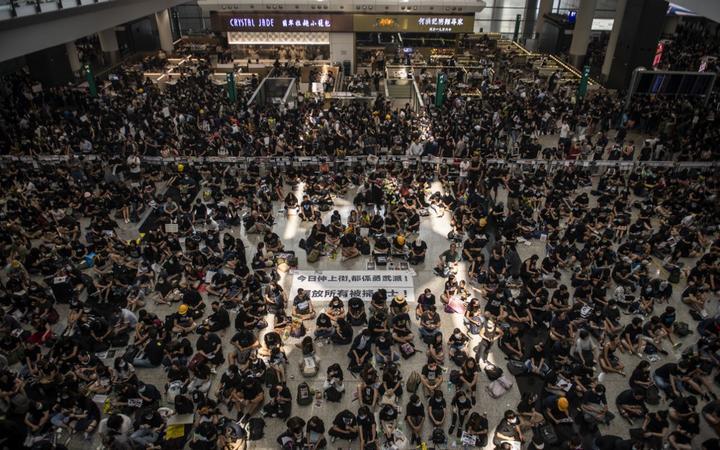 Thousands are gathered at the airport - which is one of the world's busiest.

In a statement, officials said operations had been "seriously disrupted" by the public assembly.

Many of those protesting are critical of the actions of police, who on Sunday were caught on film firing tear gas and non-lethal ammunition at close range.

Hong Kong's mass demonstrations and unrest show no sign of abating, more than two months after they were sparked by a controversial extradition bill.

In a statement on Monday, Hong Kong's Airport Authority said they were cancelling all flights that were not yet checked in.

They advised members of the public not to travel to the airport but said arrivals already heading into Hong Kong would be allowed to land.

About 75 million passengers passed through the airport - which is a major international transit hub - in 2018.

Hong Kong's mass demonstrations and unrest show no sign of abating, more than two months after they were sparked by a controversial extradition bill.

What happened on Sunday?

On Sunday afternoon, a peaceful rally in the city's Victoria Park led to clashes when protesters moved out of the area and marched along a major road despite a police ban.

There were confrontations in several central districts and police used non-lethal bullets in an attempt to disperse the demonstrators.

In the bustling central Wan Chai district, petrol bombs and bricks were thrown at police, who responded by charging at protesters.

A number of people, including a police officer, were injured in the clashes.

Footage inside another station showed officers firing what appeared to be non-lethal ammunition at close range and several police officers beating people with batons.

While protests in the city have turned increasingly violent, there were no reports of arrests during the three previous days of the airport sit-in.

On Monday the Chinese authorities, who have not yet physically intervened to quell the unrest, used their strongest language yet to condemn violent protesters.

"This wantonly tramples on Hong Kong's rule of law and social order."

Elsewhere, Cathay Pacific has warned staff they could be fired if they "support or participate in illegal protests" in Hong Kong. The development comes days after Beijing mounted pressure on the airline and a #BoycottCathayPacific campaign began to spread.

Hong Kong police have also unveiled a water cannon vehicle as a new tool to combat the protests.

Why are there protests in Hong Kong?

Demonstrations started in June in opposition to a proposed extradition bill, which would have allowed suspected criminals to be sent to mainland China for trial.

Critics said it would undermine Hong Kong's legal freedoms, and could be used to silence political dissidents.

Although the government has now suspended the bill, demonstrators want it to be fully withdrawn.

Their demands have broadened to include calls for an independent inquiry into alleged police brutality, and an amnesty for all arrested protesters.

Hong Kong is part of China but its citizens have more autonomy than those on the mainland.

It has a free press and judicial independence under the so-called "one country, two systems" approach - freedoms which activists fear are being increasingly eroded.