Hong Kong is bracing for more mass demonstrations through the weekend, with the weeks-long crisis escalating after pro-democracy protests forced the cancellation of nearly 1,000 flights this week. 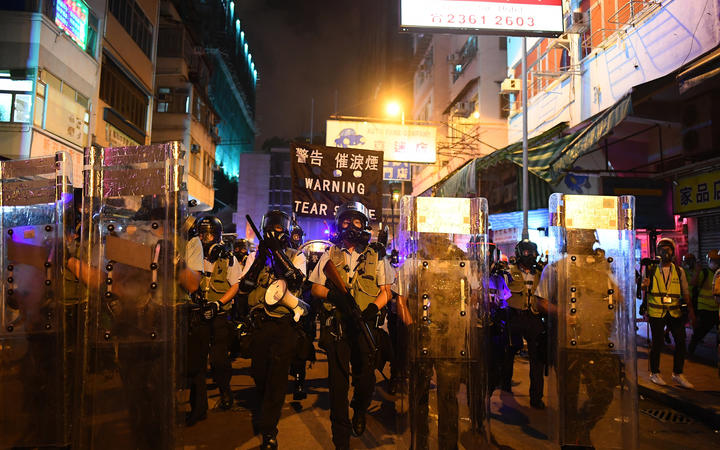 China reiterated on Tuesday that Hong Kong's protest resembled terrorism and more street clashes followed chaotic scenes at the airport two days ago, when protesters set upon two men they suspected of being government sympathisers.

Police and protesters faced off again on the streets of the financial hub overnight, with riot officers quickly firing tear gas as their response to demonstrators hardens.

Ten weeks of increasingly violent confrontations between police and protesters have plunged Hong Kong into its worst crisis since it reverted from British to Chinese rule in 1997.

The protests represent one of the biggest populist challenges for Chinese President Xi Jinping since he came to power in 2012 and show no immediate signs of abating.

US President Donald Trump tied a trade agreement with China to a humane resolution of the protests that have disrupted the city for the past 10 weeks, even suggesting that he was willing to meet Xi to discuss the crisis.

"I have ZERO doubt that if President Xi (Jinping) wants to quickly and humanely solve the Hong Kong problem, he can do it. Personal meeting?" Trump said on Twitter.

The US State Department said earlier it was deeply concerned about reports that Chinese police forces were gathering near the border with Hong Kong and urged the city's government to respect freedom of speech.

It also issued a travel advisory urging citizens to exercise caution when visiting Hong Kong. China has frequently warned against what it regards as outside interference in an internal issue.

Hong Kong's Airport Authority said normal flight operations would resume on Thursday (local time) but heightened security would remain at the city's international airport. It said on Wednesday an application for protests to be held in the terminal must be made in advance with a "Letter of No Objection" from police.

Protesters have expressed remorse after a peaceful sit-in turned violent at one of the world's busiest airports earlier this week. 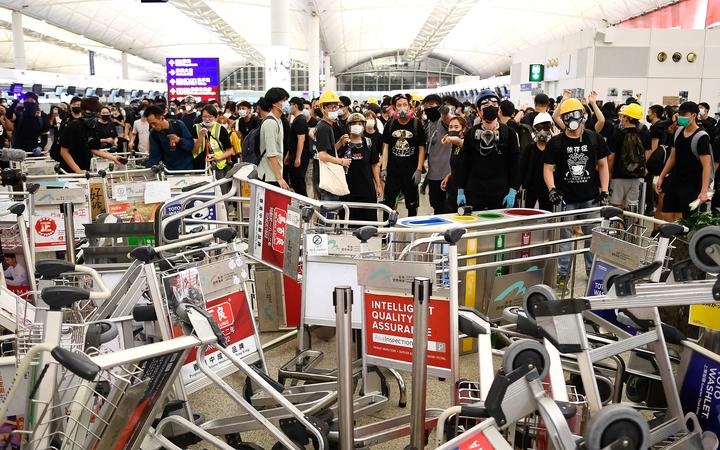 It was not yet clear whether the violent clashes had eroded the broad support the movement has so far attracted in Hong Kong. The protests have also hit the city's faltering economy.

Business and citizens groups posted full page advertisements in major newspapers to support the government and denounce the violence.

The Chinese Securities Association of Hong Kong said the city's international reputation would be seriously damaged if the violence and unrest were not stopped as soon as possible.

The head of Macau casino operator Galaxy Entertainment, Lui Che-woo, urged talks to rebuild a harmonious Hong Kong. The protests have affected the neighbouring Chinese territory of Macau, with some visitors avoiding the world's biggest gambling hub amid transport disruptions and safety concerns.

Several protests were planned across different districts of Hong Kong from Thursday, including a teachers rally, and one organised by animal lovers upset that their pets were being tear-gassed. The Civil Human Rights Front, which organised million-strong marches in June, set another protest for Sunday.

Protesters are still pushing for authorities to listen to their five requests, which include the complete withdrawal of a now-suspended extradition bill that would have allowed criminal suspects to be sent for trial in mainland Chinese courts.

The protests grew out of opposition to the extradition bill into wider concerns about the erosion of freedoms guaranteed under the "one country, two systems" formula put in place after the return to Chinese rule in 1997.

Their other demands include a halt to descriptions of the protests as "rioting", the dropping of charges against those arrested, an independent inquiry, and the resumption of political reform.