Flight check-in has been suspended at Hong Kong International Airport for a second consecutive day because of anti-government protests. 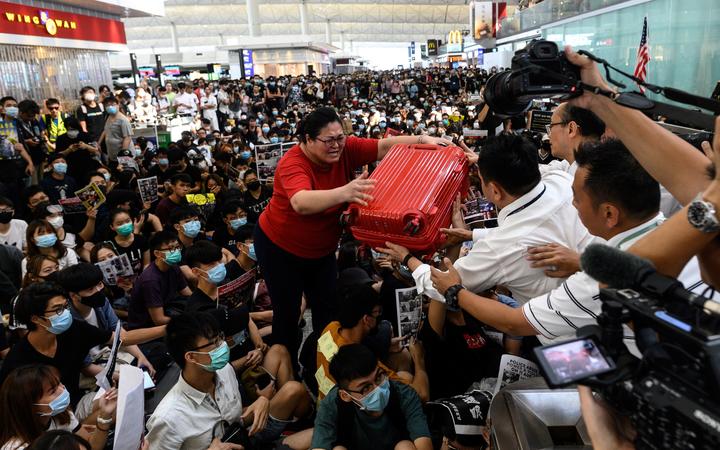 As crowds continued to gather, Hong Kong airport officials announced that all check-ins were suspended from 8.30pm NZT on Tuesday. Photo: AFP

The airport, which is one of the world's busiest, has been the site of protests for five consecutive days.

Videos on social media show passengers struggling to get through demonstrators, who have been sitting inside blocking departures.

Air New Zealand's flight from Auckland to Hong Kong tonight has been cancelled.

The airline was forced to cancel last night's flight, and the return service from Hong Kong today.

A Cathay Pacific flight from Auckland to Hong Kong left this afternoon and is scheduled to arrive there just before 10.30pm local time (2.30am NZT Wednesday) .

Ms Lam said Hong Kong had "reached dangerous situation" and that violence during protests would push it "down a path of no return".

As crowds continued to gather, Hong Kong airport officials announced that all check-ins were suspended from 4.30pm local time (8.30pm NZT) on Tuesday.

In a statement on the airport's website, passengers not through security were advised to leave the terminal buildings "as soon as possible".

Before the cancellations, images from inside the airport appeared to show protesters using luggage trolleys to build barriers and some travellers becoming distressed at the disruption.

Monday's disruption had already led to hundreds of flight cancellations at the airport - one of the busiest international transport hubs. 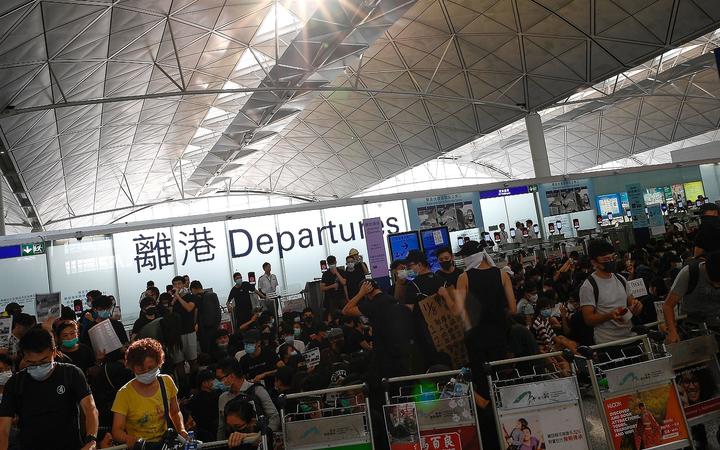 Some airlines, including flagship airline Cathay Pacific, cancelled dozens of flights on Tuesday before the latest closures were announced.

It is unclear to what extent arrivals on Tuesday will be disrupted.

Mass unrest has rocked Hong Kong for 10 weeks and shows no signs of abating.

Protests started in response to a proposed extradition bill, which has now been suspended, but have evolved into a more demanding pro-democracy movement.

Protests are fuelled by fear that the freedoms Hong Kong enjoys as a special administrative region of China are being eroded.

On Tuesday the UN High Commissioner for Human Rights, Michelle Bachelet, urged authorities to exercise restraint during protests - amid criticism of the police response.

"Officials can be seen firing tear gas canisters into crowded, enclosed areas and directly at individual protesters on multiple occasions, creating a considerable risk of death or serious injury," she said in a statement that called for an investigation.

The comments come after ugly footage emerged of confrontations on Sunday. A number of people, including a police officer, were injured in the clashes.

There have been no reports of violence at the airport gatherings.