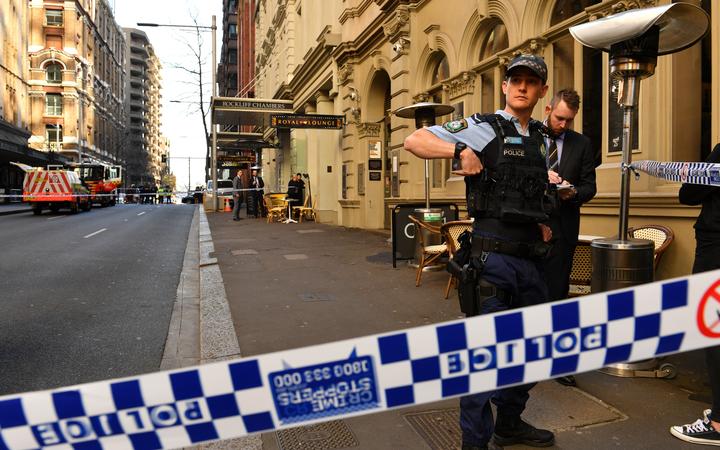 Police gather at the crime scene after a man stabbed a woman and attempted to stab others in central Sydney. Photo: AFP

Sydney stabbing rampage ended by members of the public

An armed man has been arrested in central Sydney after stabbing a woman and being detained on the street by members of the public.

A second woman has been found dead inside an apartment building on the same street, but it is unclear whether this is connected to the incident.

Police said the man attempted to carry out further stabbings and there were "multiple crime scenes".

He jumps on a car wielding a knife as another man confronts him with a wicker chair.

The incident unfolded at about 2pm local time near Clarence St and King St, a busy area in the city centre.

The injured woman was taken to hospital in a stable condition.

The motivation for the attack is not yet known, said Supt Gavin Wood of New South Wales Police.

Hong Kong on the edge of the "abyss" says Carrie Lam

Hong Kong leader Carrie Lam has warned anti-government protesters not to push the city into an "abyss", in an emotional press conference.

Ms Lam warned that Hong Kong had "reached dangerous situation" and that violence during protests would push it "down a path of no return".

She was met with hostility as she dodged questions by reporters, who repeatedly shouted and cut her off.

Mass unrest has rocked the city for 10 weeks and shows no signs of abating.

The protests began in response to a proposed extradition bill, which has now been suspended.

They have evolved into a more demanding pro-democracy movement, fuelled by fear that the freedoms Hong Kong enjoys as a special administrative region of China are being eroded.

Her comments came a day after protesters occupied the city's international airport, forcing hundreds of flights to be cancelled.

Protesters are expected back at the Airport in the next few hours.

Two teenagers who prompted a Canada-wide manhunt are thought to have died in suicides "by gunfire", police say.

A post-mortem examination has confirmed that bodies found last week in northern Manitoba are those of Kam McLeod, 19, and Bryer Schmegelsky, 18.

They were suspected of three murders - those of an Australian-US couple and a Canadian man.

The two-week hunt for the suspects ended last Wednesday when their bodies were found near the town of Gillam.

McLeod and Schmegelsky were last seen alive on 22 July. A burnt-out car belonging to one of their alleged victims, Leonard Dyck, was found near Gillam on 23 July.

President Donald Trump's administration unveiled a sweeping rule that some experts say could cut legal immigration in half by denying visas and permanent residency to hundreds of thousands of people for being too poor.

The long-anticipated rule, pushed by Trump's leading aide on immigration, Stephen Miller, takes effect on October 15th. It would reject applicants for temporary or permanent visas if they fail to meet high enough income standards or if they receive public assistance such as welfare, food stamps, public housing or Medicaid.

"The Trump administration is trying to bypass Congress and implement its own merit based-immigration system. It's really a backdoor way of prohibiting low-income people from immigrating," said Charles Wheeler of the Catholic Legal Immigration Network Inc.

The rule is part of Republican Trump's efforts to curb both legal and illegal immigration, an issue he has made a cornerstone of his presidency.

Brazilian federal prosecutors filed a court injunction seeking to bar the appointment of right-wing President Jair Bolsonaro's son Eduardo as ambassador to the United States due to his lack of experience as a diplomat.

The public prosecutor's office asked a Brasilia court to rule on the need for non-diplomats to have relevant international experience and served the nation abroad for at least three years.

Opposition lawmakers have also sought to block Eduardo Bolsonaro becoming Brazil's envoy in Washington by introducing a bill against nepotism in the public administration.

Bolsonaro, who has developed close ties with U.S. President Donald Trump since taking office in January, has defended the appointment of his son, saying he is a friend of Trump's family which would help improve relations between the two nations.

The US Attorney General William Barr says there were "serious irregularities" at the federal prison in New York City where the wealthy American financier Jeffrey Epstein died.

Epstein was found dead in his cell at the weekend at the Metropolitan Correctional Centre after an apparent suicide.

He was being held on fresh charges of sex trafficking and despite an earlier suicide attempt last month, he had been taken off suicide watch.

William Barr says he was appalled to learn of the prison's failure to adequately monitor Epstein and has also promised that the investigation into his sex crimes will continue.