People turned out in big numbers around New Zealand for the official Islamic Call to Prayer this afternoon, one week after 50 people were killed in attacks on two mosques in Christchurch.

Subsequently, vigils are being held across Aotearoa. 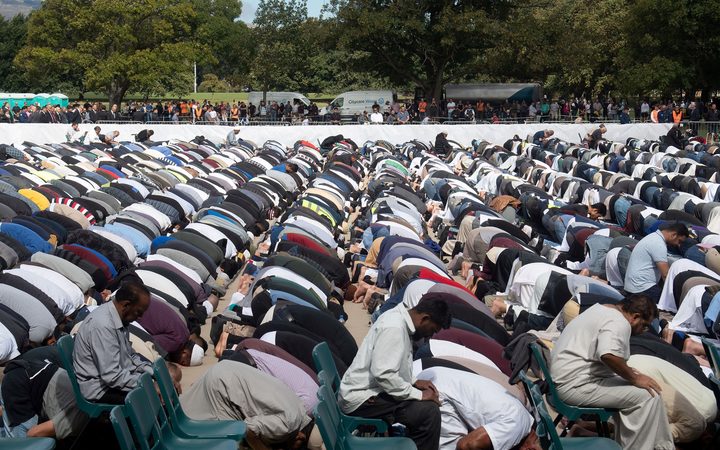 The main event was in North Hagley Park opposite the Al Noor Mosque on Deans Ave, with Prime Minister Jacinda Ardern attending the ceremony.

Prayer mats were laid out in the park facing the mosque, which is about 100m away.

A large screen was erected so that members of the public could follow what was going on. The call to prayer started at 1.30pm.

"We are broken-hearted, but we are not broken. We are alive, we are together, we are determined to not let anyone divide us."

More than 2000 people have indicated they will attend the Christchurch 'March for Love' which will start at North Hagley Park at 10am on Saturday, 23 March.

After a speech from the mayor, a Muslim prayer and performances, the march would wind its way along Rolleston Ave to the wall of flowers and then back to the park.

Three 16-year-olds had organised the event including Manaia Butler. A lot of hate had been brought to Christchurch, she said.

"The most powerful solution to that is a whole lot of love being shown and we've shown that through the earthquakes and we may have forgotten that over the few years that have been between these two events but it's a great time to bring the Christchurch community back together again and heal and acknowledge those who have been lost and those who have helped out in this time of need." 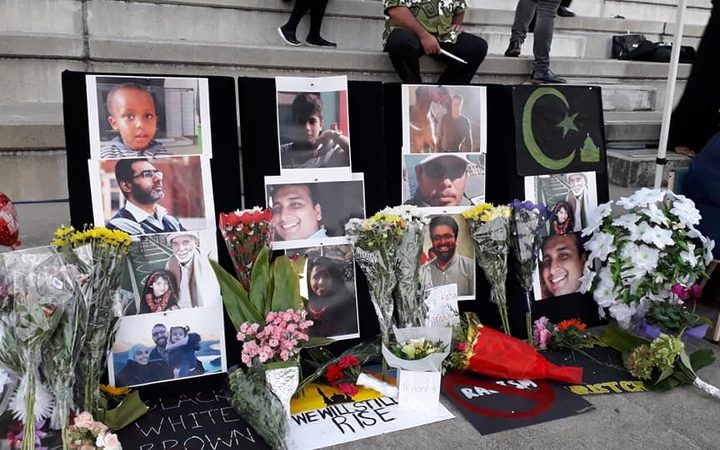 Floral tributes surround photographs of some of the victims of the Christchurch terror atttacks during the combined peace vigil attended by Auckland mayor Phil Goff in Mangere on Tuesday. Photo: Supplied

Remember Those Who Lost Their Lives 15-3-19 will be held at 5pm on Sunday at North Hagley Park and hopes to attract 50,000 people.

From 5pm prayers would be led by Muslim and Christian leaders followed by performances by opera singers and a kapa haka group. The vigil would make use of the stage for the cancelled Bryan Adams concert.

Organiser Scott Esdaile had been working on organising the vigil since the night of the shootings.

"We want to get the young ones there so I thought why not make this a family friendly event and turn it in to a little bit of a picnic and people can bring their candles and their blankets and a wee bit of something to eat because I know it's around dinner time and you know we can all just come together as a community and just show our support."

Buses would be free this weekend and people were urged to use them rather than drive their cars. 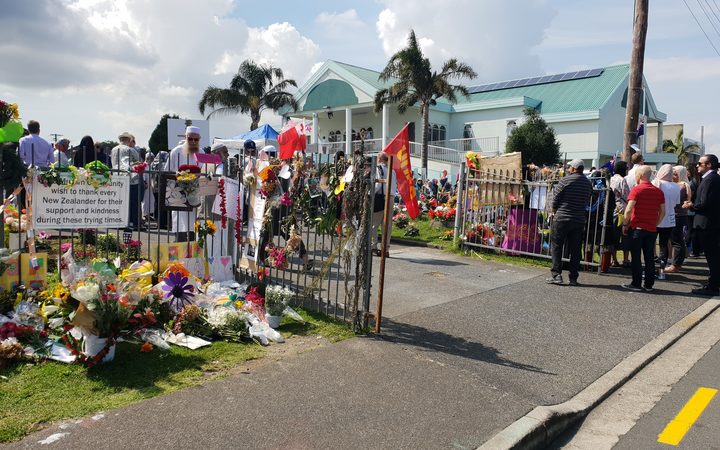 Members of the public paid their respects at Auckland mosques, such as the Masjid E Umar in Mount Roskill.

Kathryn, a preschool teacher, brought a card filled with art made by the pupils.

She said the school was diverse and they wanted to show they cared about the Muslim community.

In Avondale, members of the community createed a human chain outside the Islamic Centre. 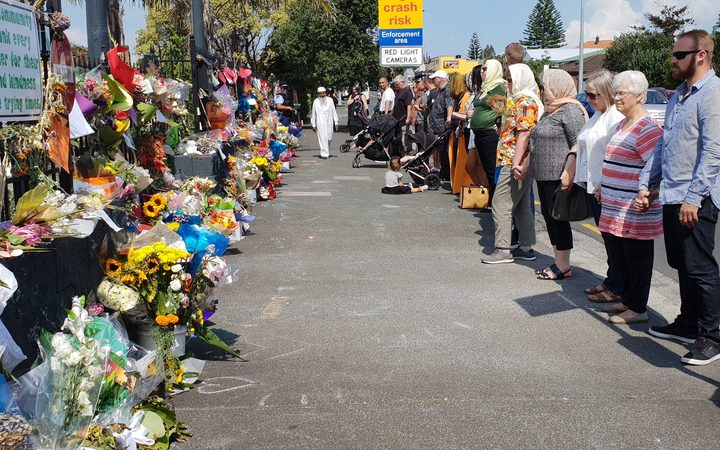 He said the reaction to the shootings was the biggest show of community solidarity he'd seen in his lifetime.

"Through the gruelling week that we've had, the incredibly positive outcome has been just to see people come together in a way that over my whole lifetime I've never seen happen in New Zealand," he said. 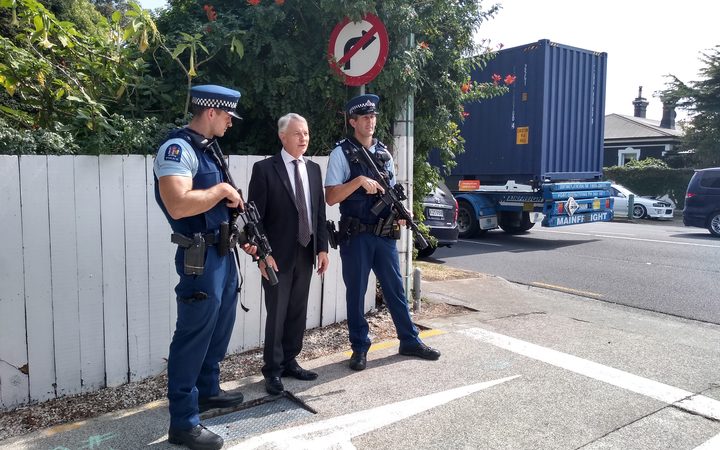 Mr Goff said all the Muslim communities he has meet say they feel wonderfully supported by the people of New Zealand.

Later this afternoon, mosques in Ponsonby, Glenfield, Ranui and Pakuranga will open their doors to the public for prayer.

A karanga from dozens of women opened the vigil, and the names of all 50 victims were read out, to complete silence across the domain.

"Kia kaha" t-shirts were worn, and one read "love for all, hatred for none". 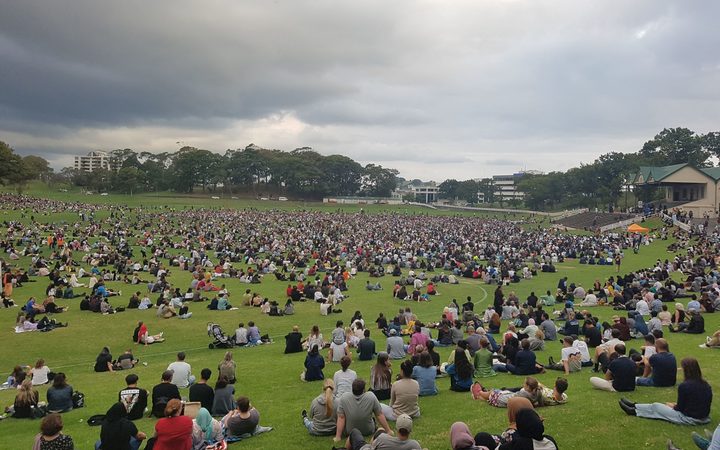 After a call to prayer by the Imam of Jamia Masjid Al Mustafa, Alhaji Molvi Abdul Shafeez, the evening became a call to action.

Behind the speakers was a banner that said "destroy Islamaphobia", and some called for the end of white supremacy and colonialism.

"This week, the rhetoric of 'This Is Not Us' has proliferated. This denial has been hurtful to many migrants and Māori, who know all too well that this is us. This is us, and always has been us," Valerie Morse of Auckland Peace Action said. 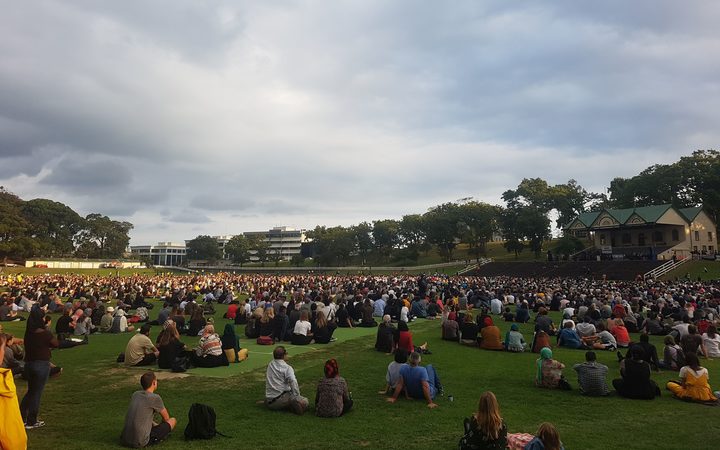 "Prime Minister Jacinda Ardern, you have shown great leadership. Your empathy, compassion, love and prayers has been an inspiration to us all.

"What we want to see is a more proactive approach from the government. We want measures taken so Muslims, migrants and Māori are not treated as a marginalised and persecuted community."

Tamkeen Saeid from the Peace Foundation, and the Youth Liaison Refugee Council, said the terrorist attack blew a lid off what has been bubbling for a long time in New Zealand.

"For what so many immigrants have been experiencing for years. Now we are confronted with this side of our nation and we must fight it.

"My culture, the religion I grew up in, and the colour of my skin does not make me any less of a human being."

"If you share a story like mine and are wondering where you can call home anymore: this is still our home."

An anti-Islamophobia rally, Kia Kaha Aotearoa: Stand Against Racism, will be held at Aotea Square in Auckland at 2pm on Sunday, 24 March. 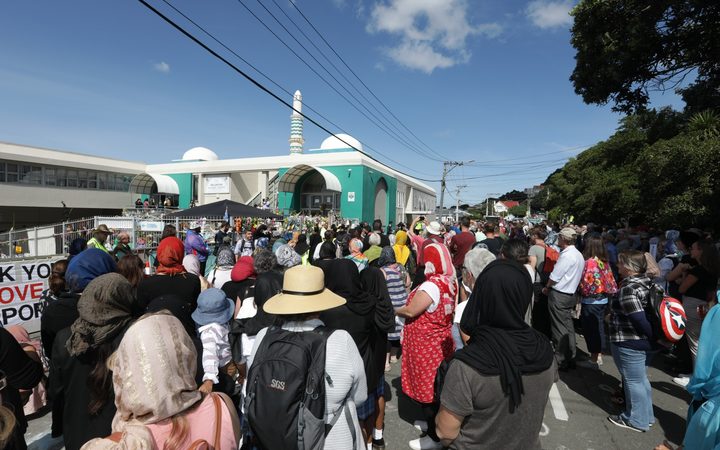 A human chain has been formed outside the mosque who have at times broken into a waiata.

A haka was also performed by local school children.

Chief operating officer of The Federation of Islamic Associations of New Zealand, Sultan Eusoff said he'd never seen anything like it.

"It is so moving and it's momentous to see so many people, with so many people with different ethnicities, communities from every walk of life," he said.

Members of the Ethiopian Orthodox Church, Sikh, Christian and Jewish religions were there to show their support.

Rabbi Jo-Ellen Duckor said the Muslim community rallied around when the Jewish community was attacked in Pittsburgh and wanted to show their support here in New Zealand.

"We just want to show that we're very similar, the Muslims are our brothers and sisters," she said.

Wearing sparkly hijabs and big grins Salma, Sara and Sahida were happy to everyone outside their mosque.

"Lots of people supporting us, which is good, it's the first time I've seen this many people come to Kilbirnie mosque!" they each chimed in.

Police Commissioner Mike Bush was among those who attended the event in Kilbirnie.

"I want to give them every assurance we will do everything humanly possible to keep them safe from harm," he said.

Dame Kate Harcourt said she had never been inside a mosque before, but found the experience wonderful.

"It was unlike anything I've ever experienced and I wouldn't miss it for anything," she said.

She said she was feeling anxiety, but also hope, because the love that has been shown. 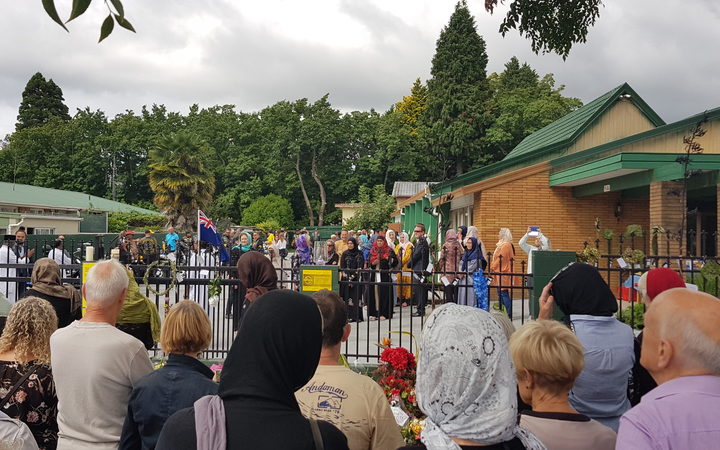 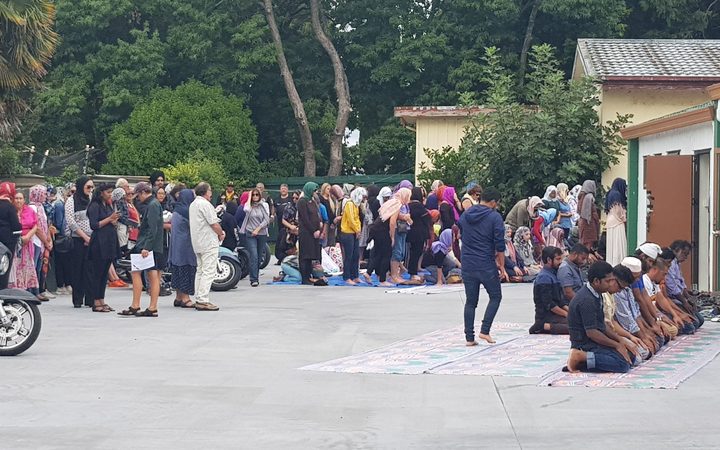 About 1500 people visited Tauranga mosque, many forming a human chain.

They were invited into the mosque but there were so many people they spilled out onto the street. 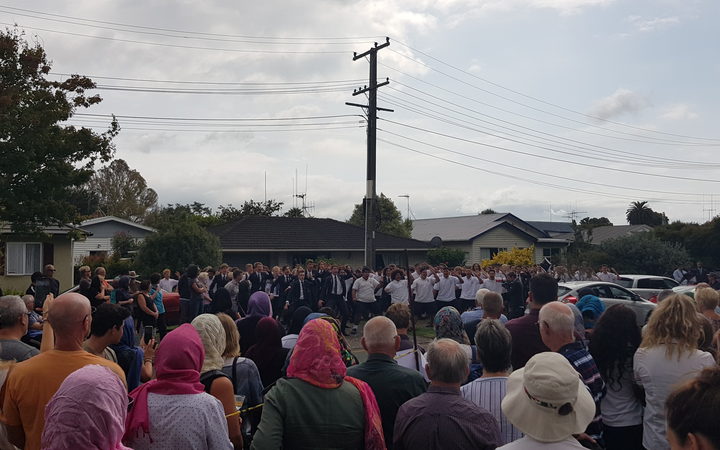 Two gangs - Mongrel Mob and Greazy Dogs - turned out, saying they were there to offer protection. 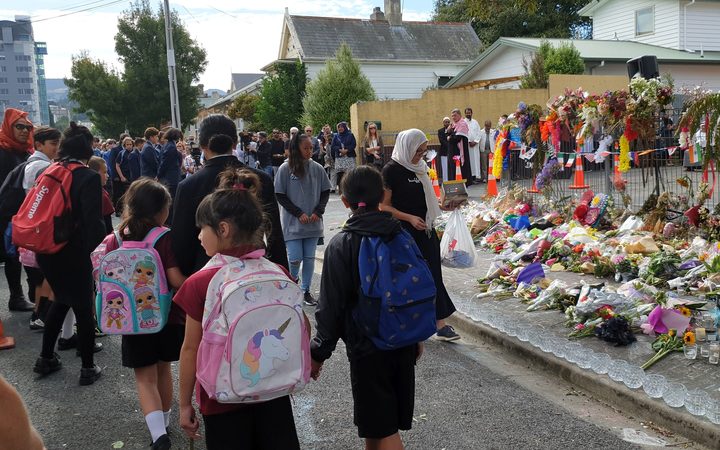 Down in Dunedin, an emotional haka was performed outside the Al Huda Mosque as a show of solidarity. The street was packed as hundreds of people joined the circle of peace.

A Muslim woman, who asked to remain anonymous, said she was touched by the support.

"It's overwhelming and unexpected, but very touching and it's really nice to see so much support. It's not something I've ever imagined before in my life," she said.

One of the messages written on a poster read: "Stay strong because things will be better. It might be stormy now, but it can't rain forever."

Other vigils around the country 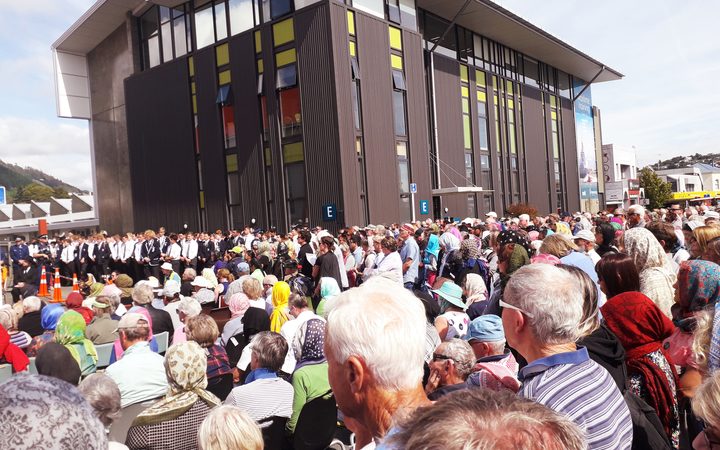 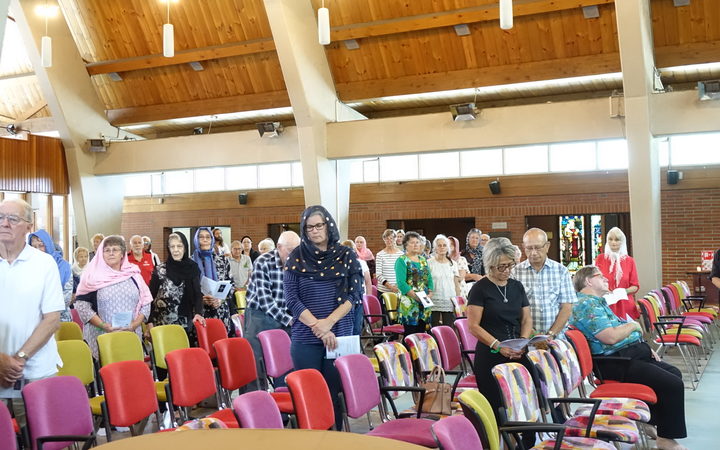 Whangarei Anglicans faced Mecca, wore scarves, and left their shoes at the church door today to show support for Muslims.

A vigil will be held at the Bowl of Brooklands in New Plymouth at 7pm.

A candle-lit hikoi of unity will be held in Hastings, starting at Albert Square at 6.30pm and finishing at the Baitul Mokarram Masjid in Heretaunga Street East. Women wanting to attend are asked to wear headscarves as a sign of respect if they feel comfortable doing so.

The Kāpiti Vigil for Christchurch will be held at 7pm at the Zeal youth centre at 132 Rimu Road.

In the UK, a group that helps refugees and asylym seekers, held a vigil.

“Home is where I feel wanted” - Asmat Rowe, who came to the UK as a refugee, speaking at today’s vigil for the victims of the Christchurch terrorist attack #TheyAreUs pic.twitter.com/cnNz0FvpIa

In the US, the Islamic Center of Boulder held a vigil.

Crowds gathered at the Sydney Town Hall Square to pay tribute to the victims of the shootings.

Crowd congregation for the start of our Candelight Vigil for the victims of the Christchurch massacre in Town Hall Square Sydney, if you're nearby please join us to say no to racism and no to hate pic.twitter.com/2Xw0hrfAZc

In times of tragedy we must stand united against racism and hate. Together we mourn the victims of the Christchurch attack #TheyAreUs #HarmonyDay #EveryoneBelongs pic.twitter.com/U1aOnk52O2