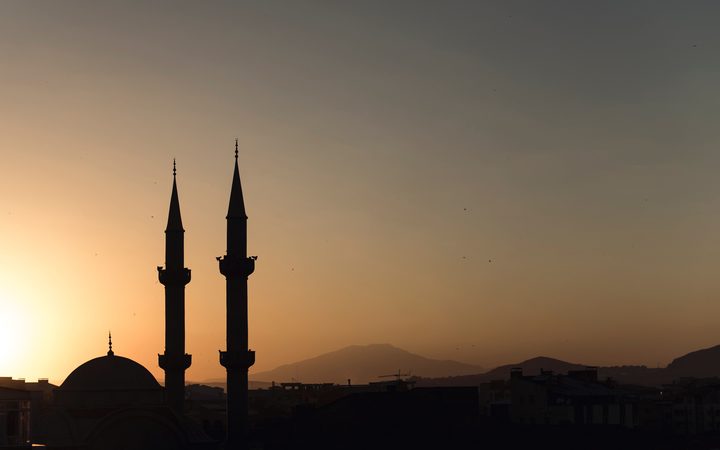 The call to prayer (adhan) is delivered five times a day by a muadhan to remind Muslims to come to mandatory prayer and leave worldly matters behind.

How is the call to prayer performed?

The person who performs the adhan is called the muadhan, it is called in Arabic.

During the adhan, Muslims should stop and listen. The word adhan itself means "to listen".

This is what is said in the adhan; the first phrase is said four times and the rest twice.

Ashhadu an la ilaha illa Allah - I bear witness that there is no god except the One God.

Hayya 'ala-l-Falah - Hurry to success (Rise up for Salvation)

Assalatu khairum-minan-naum - Prayer is better than sleep (This part is only recited for morning prayers.)

There is one difference in the call to prayer between Shia'a Muslims and Sunni Muslims.

Ashhadu ena Aliun Wali Allah - I bear witness that Ali is the vicegerent of Allah.

Another part Shia'a Muslims add is:

There is an institution for muadhans dating back to Prophet Muhammad's times.

Muadhans are usually selected based on good character and/or their moving renditions of the adhan. Notable adhans can be listened to online.

It is traditionally done from the minaret of mosques, and some muadhans face the Kaaba in Mecca - the most sacred site in Islam - while delivering the call. Others faces the four compass directions in turn.

What is its significance?

The adhan is delivered five times a day to remind Muslims to come to mandatory prayer and leave wordly matters behind.

Canterbury University conducted it out loud as students stood in silence and watched after Friday's attacks.

This statement of faith, called the Kalimah - a declaration which brings a person into the fold of Islam - is the first of the Five Pillars of Islam.

Salat al-jama'ah - congregational prayer - can be done in mosques or in the open. Women and men are always segregated during prayers.

Friday is a significant day of the week for Muslims, it is known to be a day for charity and family gatherings. The prayers of this day are known as Salat Al Jumu'ah.

The origins of the adhan

Sunnis believe that one of Prophet Muhammad's Sahabah (his companions) had a vision in a dream, in which the adhan was revealed to him.

Prophet Muhammad heard of the revelation and adopted it as a call for prayer.

Some also believe that another person had had a vision prior to the companion and thus the prophet became sure that it was a revelation from Allah and adopted it.

During the time, there was no official way for people to know the time for prayers and the prophet preferred the call better than the methods used by Christians and Jews.

Shi'a sources state Muhammad ordered the adhan and noone else contributed, or had any authority to contribute, towards the adhan.

Other Shi'a sources state that Bilal ibn Rabah al-Habashi was the first person to recite the adhan publicly out loud in front of the Muslim congregation.