The country has observed the Muslim call to prayer and two minutes of silence in Christchurch, one week after terror attacks that killed 50 people at two mosques in the city. 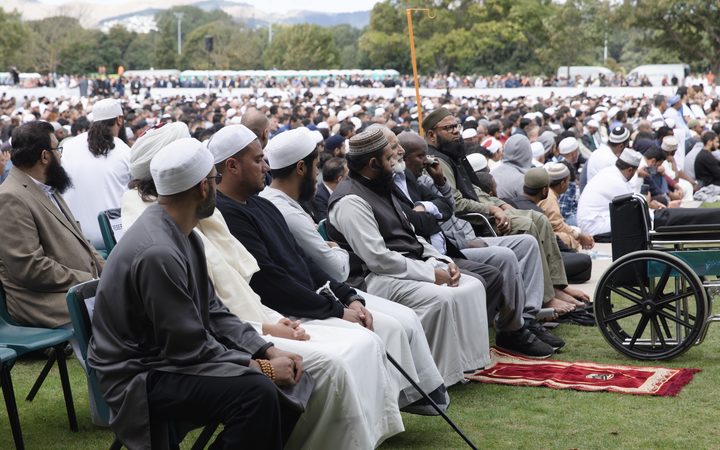 Watch the broadcast of the event:

It was attended by Prime Minister Jacinda Ardern, Muslim community leaders, local iwi and international dignitaries, among others. It was followed by two minutes of silence, which has been observed nationally.

"We are broken-hearted, but we are not broken. We are alive, we are together, we are determined to not let anyone divide us.

"To the families of the victims your loved ones did not die in vain, their blood has watered the seeds of hope. Through them the world see the beauty of Islam and the beauty of our unity."

"We are here in our hundreds ... love will redeem us.

"To the people of New Zealand, thank you for your tears, your haka, your compassion."

Fouda also thanked the prime minister, the government and people of New Zealand.

He also thanked the police service and people who helped on the day.

"It's easy to feel lost after the trauma of Friday but Allah will give strength."

He asked Allah to protect New Zealanders and the world.

A range of other vigils and commemorations are also taking place across New Zealand today.

Thousands of people arrived at Kilbirnie Mosque to show their solidarity with the Muslim community as they attended their Friday afternoon prayers.

A human chain formed outside the mosque, which at times become a waiata.