The Department of Conservation is appealing for information about a suspected dog attack on a leopard seal in Porirua. 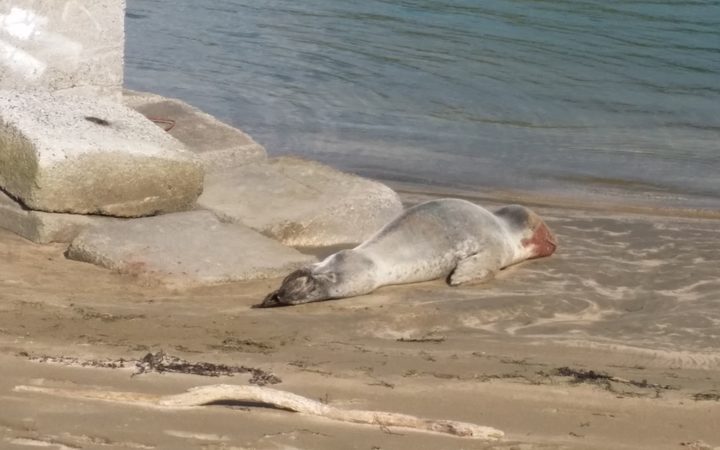 Rangers were called to Ngāti Toa domain on Saturday, where large amounts of blood, seal tracks and dog prints were found.

A two-metre long injured seal was later spotted with a badly bloodied face at Mana Marina.

Leopard seals are protected under the Wildlife Act and the Marine Mammals Protection Act.

Usually residing in Antarctic waters, it's not known the exact number of leopard seals on our coastline, but Leopard Seal New Zealand is currently aware of eight staying on New Zealand's mainland.

Ranger, David Moss said the injured seal was last seen swimming into Porirua Harbour on Sunday, and DOC is appealing for any information on its current whereabouts.

"Due to its size, vets are unable to treat this animal for its injuries without sedation. Therefore, the best we can do is ensure it is not harassed again if it comes ashore," he said.

Mr Moss said DOC's next goal will be to find the dog responsible, which is likely to be injured.

The dog owner could face penalties of up to two years imprisonment or a fine of up to $20,000, and an order for the dog to be put down.

But Mr Moss said the priority is to ensure the dog and the seal are in good health.

"We're also interested to to find out what happened, because sometimes dogs aren't under control even though under the Dog Control Act and the Marine Mammals Protection Act, it is an offence if your dog injures protected wildlife," he said.

Mr Moss said if anyone comes in contact with the seal, to keep a distance of 20 metres.

"These are like getting into a cage with a lion or a tiger, they are a large predator, they're really quite impressive," he said.

The Department's marine science advisor Laura Boren said leopard seals are becoming more common on our coasts and owners should always have control of their dogs in these areas.

"To prevent this kind of tragic event, always check the rules before you go, keep an eye out for wildlife and always carry your leash and make sure you can recall your dog," she said.