Lianne Dalziel says she is committed to deliver what is best for Christchurch over the next three years. 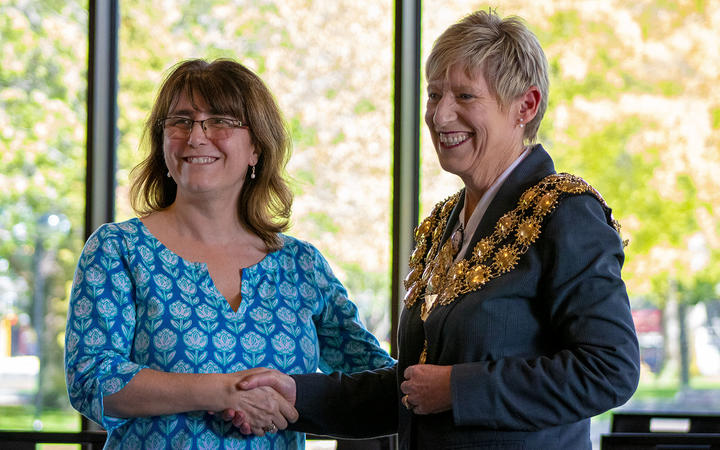 Ms Dalziel was inducted for a third term as the city's mayor in a ceremony this afternoon - which also included the induction of the city's new councillors - at the Christchurch Town Hall.

Ms Dalziel defeated businessman Darryll Park by 18,000 votes in the local body elections earlier this month, which was marred by allegations of inappropriate behaviour against former councillor Deon Swiggs.

In her opening remarks, Ms Dalziel said she was confident that momentum of rebuilding Christchurch will continue.

"As I said, our city is emerging from unprecedented challenges to become one of the most dynamic cities in New Zealand. I stand by my statements that we have laid the foundation for a modern, sustainable and resilient 21st century city," she said.

Ms Dalziel also thanked the people that participated in the local government process, in particular the voters.

"It is they [the voters], you, who have given each of us the mandate to serve the city for the next three years," she said.

He emphasised the need for sustainable development in the city and was the only councillor to reflect on the devastating impact of the mosque shootings in March.

"As I stand here as councillor elect for the Linwood Ward, I need to acknowledge what happened on March 15. A terror attack on us, our Muslim community, on our city and on our country," Mr Johanson said.

"So I say we must unite to defy such hatred and hostility, we must embrace diversity and difference to celebrate and understand each other rather than to be afraid of one another."

Prior to the induction ceremony starting, Mr Swiggs hit out at the council's handling of the code of conduct complaint against him in a strongly worded statement.

"The whole thing is a farce, and shows we should all question whether or not we live in a democracy? Under the current system, all a person has to do is make an unsubstantiated complaint, unsigned by the complainant and without interview of the complainant or the accused," he said.

In response to Mr Swiggs' statement, the council said whether or not the code of conduct investigation relating to him should continue was "complex".

A council spokesperson said it was seeking external legal advice on the issue.

"Once the mayor and chief executive have received that advice, we will be discussing this with the parties involved before issuing a decision publicly," the spokesperson said.