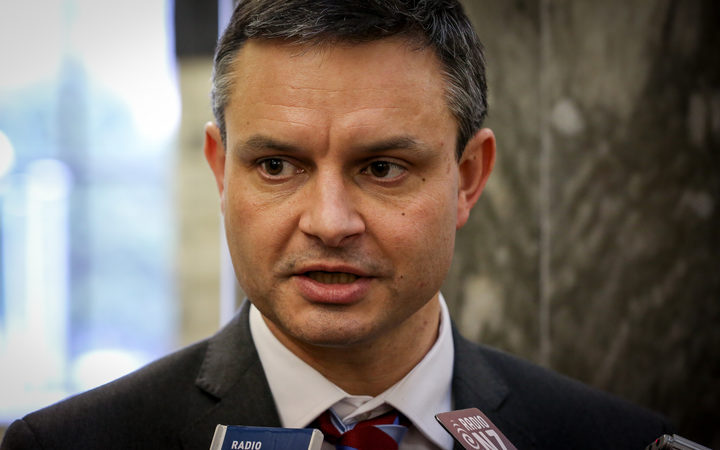 The Green Party has differentiated its policy on climate change from Labour's by coming up with what is effectively a carbon tax.

At the launch of its policy in Auckland yesterday, Mr Shaw said the Emissions Trading Scheme was a "poorly conceived" piece of public policy that "produces the exact opposite result of that which was intended."

It wants to replace the scheme with a Kiwi Climate Fund that would put a charge on all climate pollution, including agriculture.

The proceeds would pay for a massive tree-planting programme, and whatever was left over would be returned as a dividend to New Zealanders aged over 18. The party estimates this would be $250 a year.

Mr Shaw told Morning Report the aim was to plant 1.2 billion trees on about 1.1 million hectares of erosion-prone land by 2050.

"At the moment we don't even have the nurseries growing the seedlings to be able to build up to that level of capacity, so it is a programme that has to build up over time."

He said it would create "tens of thousands" of jobs, and the wages would be paid by revenue from the tax on emissions.

Most jobs would be in the regions - which was also where many of New Zealand's 70,000 young people not in education, employment or training, were found, he said.

He said monsoon floods in India and Bangladesh as well as hurricanes that hit Houston, Texas and the Caribbean islands, were clear signs climate change was a problem now - not just for future generations.

"Most of the time politics is about compromise. It is about negotiation. You come to an arrangement. You meet each other halfway. But you cannot negotiate with the climate."

Together, smaller countries could have a huge impact, he said.

"If you added up all of the countries which each have about 1 percent or less of global emissions together, we add up to 23 percent.

"So all the small countries acting together have more impact than the United States and almost as much as China."

At the policy launch, climate change spokesperson Julie Anne Genter said the charge on agriculture emissions, starting in 2020, would reduce an average dairy farm's profitability by less than 2 percent - but only if the farmer did not reduce pollution.

"Of course the whole point of the price is to incentivise change, and we'll be supporting them with the sustainable farming funds and they'll be able to offset the cost with additional planting."

Mr Shaw said pollution must be taxed instead of work, so the Green party is also pledging to drop the bottom tax rate from 10.5 percent to 9 percent.

The Greens reiterated a plan to reach zero emissions by 2050 - a policy that Labour also announced a few days ago.

Asked whether Labour was stealing Green policies, Ms Genter said: "Not enough of them - that's why the Greens need to be in the next government to make sure that we actually make action on reducing our climate pollution."

Labour leader Jacinda Ardern said the party was not planning on scrapping the Emissions Trading Scheme.

"Our view is that an emissions trading scheme also incentivises and rewards acts to mitigate emissions. It's a scheme we've always favoured.

"It's already in place and so that's certainly our policy to stick with it."

The Green Party also called on Labour to take up its policy of stopping coal mining and oil drilling, arguing a zero emissions target was unattainable without stopping the search for fossil fuels.