The storm which caused widespread flooding across the top of the South Island has also had a devastating impact on mussel farms in the region. 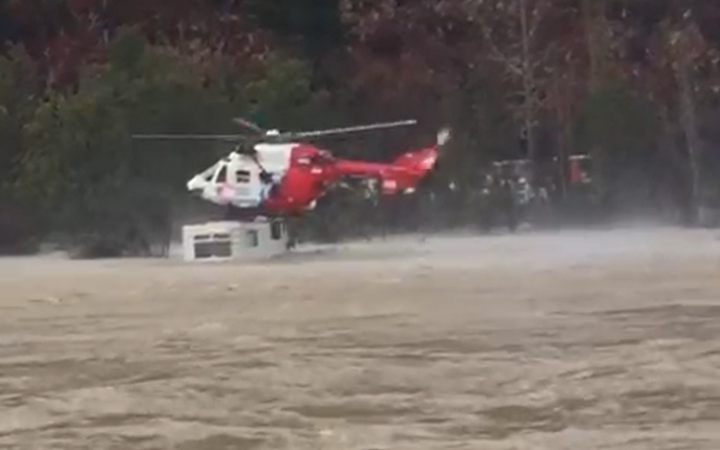 A man was rescued during the widespread flooding at the top of the South Island. Photo: SUPPLIED

The clean-up is estimated to take weeks and cost mussel farmers millions of dollars.

When the wild weather subsided, it left behind a tangled mess of mussel lines on a number of farms in Tasman Bay.

For Nelson-based company MacLab, more than half of a 270-hectare farm - one of its largest - was ripped out of the seabed during the storm.

MacLab's general manager of aquaculture, Scott Gillanders, said they were still working to repair the damage and assess the financial impact.

The Nelson-based company farms around 8000 tonne of greenshell mussels at several sites in the top of the South Island which are processed into nutraceutical products.

"We are still in the fix up phase of the operation but, to put it in perspective, we have around about 140 mussel lines on that particular farm in Tasman Bay and 76 of those lines suffered substantial damage.

"The anchor on one end of those lines has been basically plucked out of the seabed and that has resulted in the lines being tangled. That tangling has caused a lot of crop loss and, as we pull each of those lines out, we will get more crop loss."

In 15 years farming on that site, it was the most severe weather event the company had experienced.

Data from Port Nelson shows wave heights on the morning of 17 July were in excess of 8 metres.

Six vessels had been working on the farm during daylight hours since the storm to untangle the lines and re-anchor them to the sea floor.

"The gear is designed to hold in reasonably normal weather and storm type events for the area but it is certainly not designed to withstand that sort of damage from extreme weather like that."

He said it would be another week before the repair work was complete and even longer before the farm was fully restored.

Marine Farming Association president Jonathan Large said a number of farms in Golden Bay and the Marlborough Sounds also suffered severe damage, but those in Tasman Bay bore the brunt of the wild weather.

"It was a one-off event really, I've never seen anything like it, just consistently big seas that went through Tasman Bay."

He said the waves were much bigger than those during ex-Cyclone Gita, which left the mussel farms unscathed but had a devastating impact on roads and forestry in the region.

"It's quite similar to a whole bunch of fences on a farm being washed away and tangled up on the farm still, but then you have this big process of untangling all those fences and putting them back in place.

"I guess the big difference is, attached to those fences is all our livestock, all our crop, and there is definitely going to be significant loss of that crop."

Large said several vessels have been working in the bay since the storm to fix the damage. He estimated they were two thirds of the way through the most immediate repair work.

Most of the crop in Tasman Bay was about half way through its growth cycle, which was devastating for farmers.

The lines were seeded between last November and February and had an average life cycle of 15 to 18 months.

"The quantum is unknown in terms of the crop loss but I wouldn't be surprised at all if it runs into the millions, and then there is the time it takes. It takes a hell of a lot of time to pull these lines back into place and reset new anchors.

"We have to then make decisions around whether we try to harvest that crop in its juvenile stage and do something with it, or try and grow it out as it is on the lines, which are decisions we are yet to make."

MetService lead meteorologist Kyle Lee said a slowing moving front and a consistently strong northerly wind over a number of days had led to a significant swell developing in Tasman Bay, which brought on significant wave heights during the storm on 17 July.