A Far North farming family say they are living a nightmare due to feral dogs killing more than 100 of their livestock in the last week. 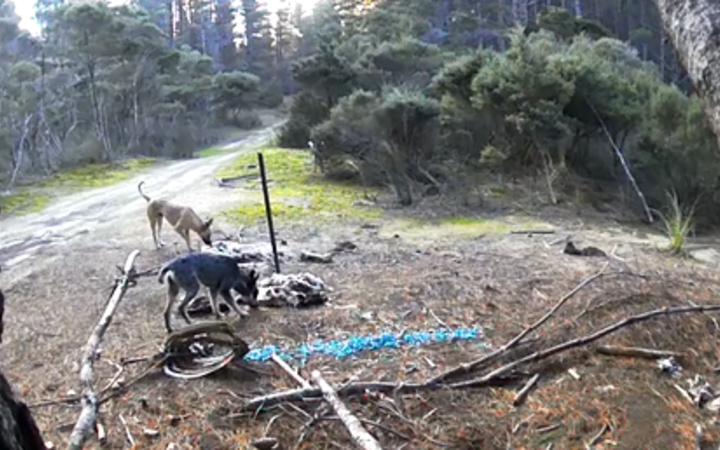 More than 100 lambs and ewes and about 36 angora goats were killed by feral dogs on the Nilsson family's Shenstone Farm, just south of Cape Rēinga. Photo: Supplied / Anne-Marie Nilsson

Anne-Marie Nilsson said since last Monday more than 60 lambs and 40 ewes had been killed, while her 15-year-old daughter had lost about 36 angora goats.

"That's pretty harrowing for a young person to deal with... it's a gut wrenching thing to tidy up after that, dogs don't kill cleanly.

"We're farmers, I mean we grow animals, we love our animals and to have to put them down because they've been mauled by dogs is just heartbreaking."

Nilsson said despite staying up at night keeping guard, so far they had been unable to shoot any of the feral dogs.

The animals appeared to be breeding in neighbouring forestry and Department of Conservation (DOC) land, she said.

"They haven't become an issue until now, because right now we're lambing, and all of a sudden, that gets really interesting to dogs.

"We think at the moment, we're dealing with a pack of seven and a pack of five dogs, but we don't know that, there's probably more."

Nilsson said the issue was taking a big toll on the family mentally and financially, with about $30,000 of income estimated to have been lost.

"We're all pretty strung out and and a bit shady because of lack of sleep and just having to deal with the aftermath of these dogs."

She said they had received offers of support from members of the public, including locals who were going to help them out on the weekend.

DOC said it had been monitoring the nearby conservation land since April, with track inspections and trail cameras, and there had been no sightings of dogs.

It said it was saddened to hear of the recent livestock deaths and the farmer should report it to the Far North District Council, who have authority under the Dog Control Act.

"It's important to note that DOC are just one of many land owners in the Far North and we can only monitor and be responsible for our tracks."

He said the council wanted to assist where it could.

Given farmland, forestry land and DOC land were thought to be involved, a collaborative approach would be needed, he said.

"So in that sense, the council is ready and committed to work with other agencies to achieve the right kind of outcomes."

Myburgh said animal management officers did not carry weapons and would not put down dogs the way farmers were able to.

"We would seize the dog hold it for nine days in our animal shelter and if it's not claimed, then we would proceed to destroy the dog... particularly a feral dog because these dogs have been abandoned, left to wander in forestry areas on DOC land," he said.