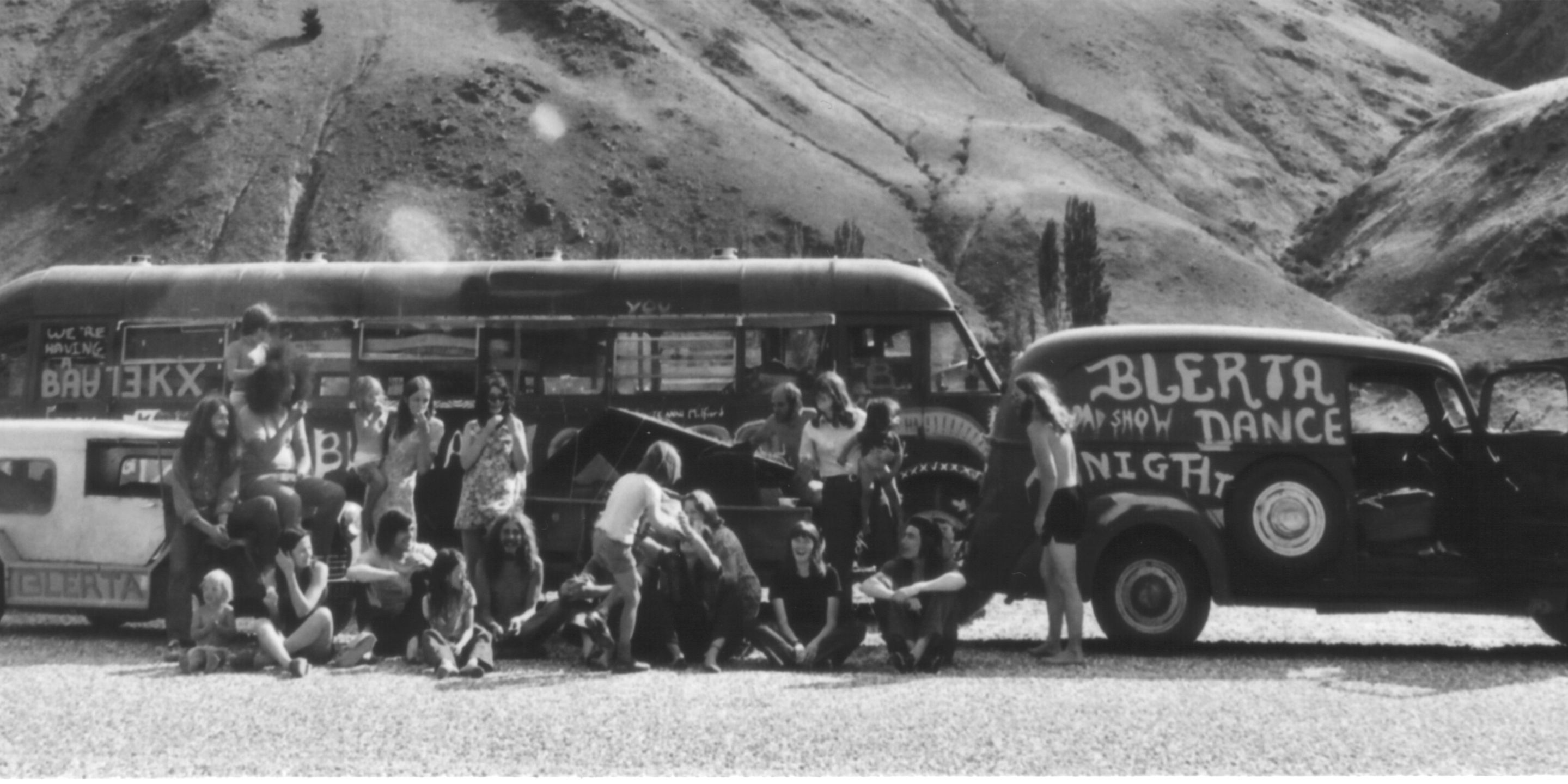 The band Blerta (or BLERTA) began with the 1970s and included some of the country's most talented musicians, actors, film makers, lighting technicians and their families. This documentary charts their history as they led a revolutionary charge in culturally challenged New Zealand.

Researched, produced and presented by Keith Newman with sound design by Jeremy Ansell for RNZ.

The BLERTA bus and entourage on the West coast of the South Island during the summer of 1971-1972 Photo: Helen Whiteford, used with permission.

In the summer of 1971-72 the nation was plastered with brightly coloured posters announcing 'BLERTA Is Coming!'; who or what BLERTA was remained unclear until an antique bus covered in psychedelic imagery and an entourage of up to 50 minstrels and multimedia pioneers trundled into town.

When their only hit single ‘Dance All Around the World’ began riding up the charts the attendance at their concerts doubled. When the films they had been involved in hit the big screen people marvelled, and when the TV series arrived, BLERTA became a legend with their own cult following.

BLERTA was the brainchild of actor and drummer Bruno Lawrence who was fed up with the formulaic music industry that sought to clone musicians according to some commercial recipe. He'd just finished a stint with Quincy Conserve and was playing with rock unit Littlejohn, with bass player Tony Littlejohn and singer and rhythm guitarist Corben Simpson when a series of events made the next step inevitable.

The unit rapidly grew from a hot trio into a supergroup as it merged with Sons and Lovers players Kemp Tuirirangi and Alan Moon to complete Corben Simpson's first solo album and deliver the Littlejohn collaboration which sowed the seeds for an even bigger unit.

It seemed only logical to add the members of the Acme Sausage Company, comprising a jazz band and multimedia film unit that Bruno and Geoff Murphy had put together in their school years. With teenager Beaver on board for her first experience fronting a band and a growing group of actors joining the cast, a plan was hatched to take this organised chaos to the nation.

What happened is a glorious and largely untold story, with BLERTA becoming a creative melting pot for a multitude of careers as it shape-shifted over four years evolving dynamic and outlandish stage and musical shows.

With top actors Tony Barry, Martin Sanderson, Ian Watkin and others on board, along with a film crew capturing skits and dramas and constantly dreaming up new ideas the shows became a multimedia extravaganza. Special effects and props were created and talent fostered that became part of many of the movies that marked the formative years in New Zealand film making including Wildman, Goodbye Pork Pie, Smash Palace, Utu and Quiet Earth.

BLERTA released a handful of crazy singles and two albums, including one in Australia with Renee Geyer on lead vocals unfortunately this was prevented from release until Beaver re-recorded her lines.

After two years in Australia they returned for a final tour and as a grand finale created a madcap six part television series, the best of which ended up on a Geoff Murphy produced movie and DVD.