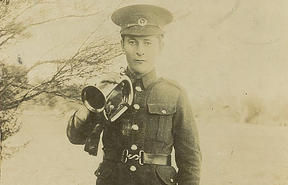 Producer Shelley Wilkinson talks about something that is dear to her heart, and which surfaced through family memories and memorabilia, namely a photo of her Great Uncle Cecil Mead holding his bugle.

Each episode of Bugle Stories looks at a different shiny or dull facet of a little copper and brass instrument, the standard army issue bugle.

The stories range across basic facts about the instrument, a bugle with tattoos, children who played the bugle (Shelley's brother, for one!), the messages it embodies, a sad story from Feilding and a very special bugle call.

Look at photos that accompany this series here

Ritchie A - Overture, A Bugle Will Do
Performed by the Auckland Philharmonia Orchestra conducted by Miguel Harth-Bedoya. Recorded 7 June 1998.

Bugle tribute
Ninety-eight years after Harry Beardsall died during the Battle of the Somme, his great-great-great grand niece, Charlotte Osmaston, plays the last post on his old bugle.