Chef Cameron Petley told us this dish has been in his family for as long as he can remember, and he says it's everyone’s favourite! It’s even better served with freshly baked Māori Bread or fried bread. 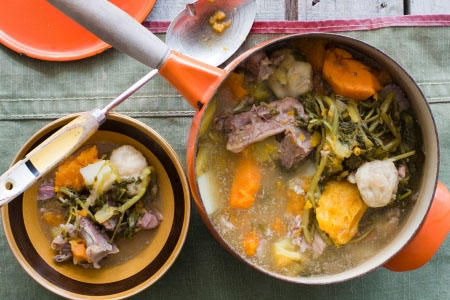 Place pork bones and hock in a large stockpot. Pour in just enough water to cover bones and hock, season with salt and then gently simmer for 1½ hours. Add potatoes, kumara, pumpkin and kamokamo to the pot.

Meanwhile, combine flour and baking powder and season with salt. Gradually add water to form a dough. Break off small bits of dough and form balls.

Place watercress and doughboys on top of boil-up and cook until watercress is tender. What's in Season - May