By Samantha Hawley for the ABC

Before Prince Philip's death he had made it clear he wanted a no frills, no fuss funeral. 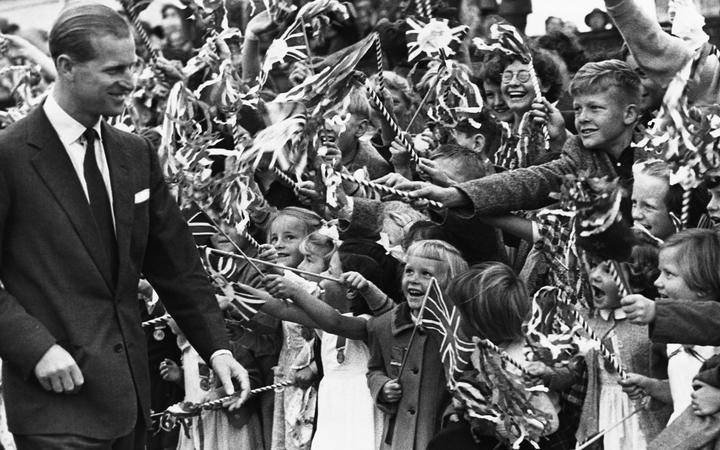 The Duke of Edinburgh Prince Philip is greeted by cheering children at Waipukurau, during the first Royal visit to New Zealand in 1953. Photo: Getty Images

He hadn't wanted his body to lie in state and it won't. There will be no state funeral and he did not want one.

Strangely, thanks to the pandemic, it will be a much more ordinary affair.

Buckingham Palace has confirmed his funeral will be modified in line with the current government advice - currently in England, only 30 people are allowed at funerals.

The duke's death was marked at midday on Friday (UK time).

At that moment, the Union Jack flying above Buckingham Palace was lowered to half-mast.

Barely anyone witnessed it and if they did, they likely would not have known the significance of the moment.

Just minutes later, the official announcement came through and the colourful royal website turned to a darkened tribute to the fallen prince.

"I feel like crying," one woman said after learning of the news as she passed by Buckingham Palace. 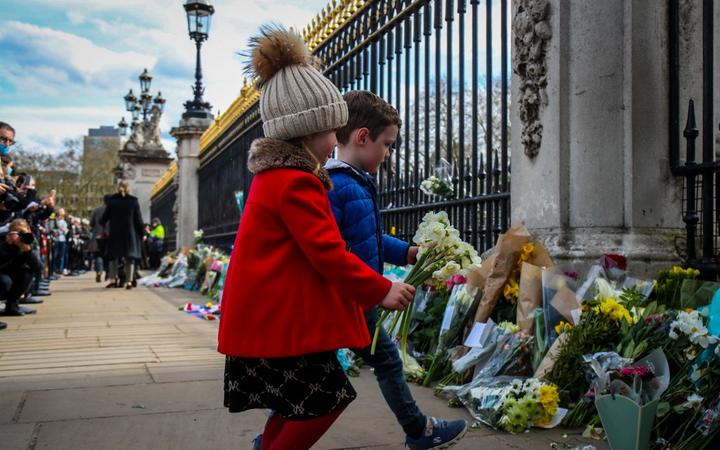 Children add to the floral tributes outside Buckingham Palace in London. Photo: AFP

Covid-19 claims too many lives

It's been a hard, cruel year for the Brits.

Too many lives have been lost throughout the coronavirus pandemic and the genuine feeling was one of true sadness and concern for the Queen, who had lost her partner of seven decades.

But there was no great fuss - the protocol was followed, but only briefly.

The notice of the 99-year-old's death went up on the gates of Buckingham Palace, but it was removed only a few hours later to avoid crowds gathering. 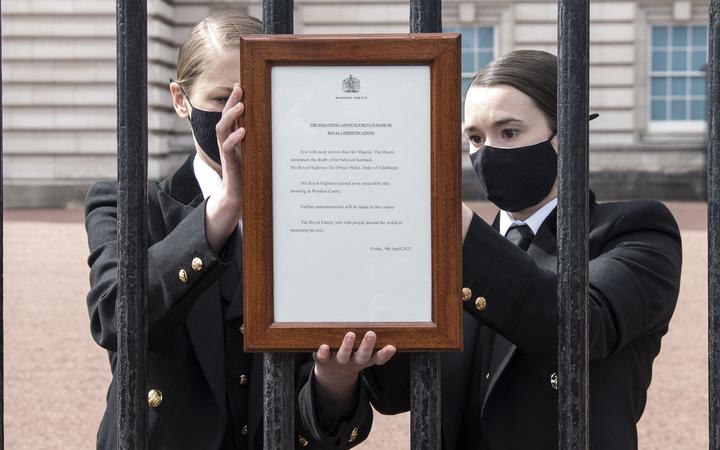 The notice of Prince Philip's death is attached to the gates of Buckingham Palace in London. Photo: AFP

Subdued sorrow for a nation already in mourning 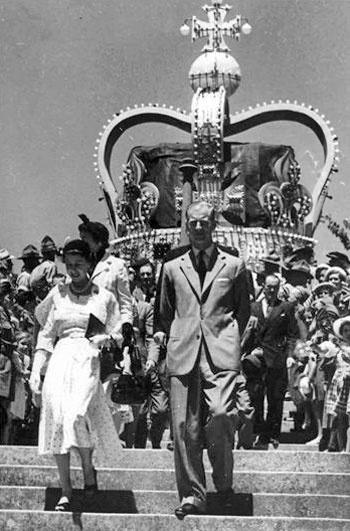 A huge crown dwarfs the royal couple as they walk down the steps in front of Nelson Cathedral, 17 January 1954. Photo: Archives New Zealand

Now is not a time for tradition and the Palace knows it. Later on Friday afternoon it issued a statement urging people to express their condolences in the safest way possible and not to gather at the royal residences.

An online Book of Condolence was set up for those wishing to leave messages and the Royal Family asked for the public to donate to charity rather than leave floral tributes.

Dozens of people still came to lay flowers at Buckingham Palace and Windsor Castle, but the numbers were small and nothing like what would have been envisaged if it were not for the pandemic.

The atmosphere in Windsor was like that of the one around the streets of Buckingham Palace; sombre and low-key.

And with the city still in lockdown, there will be no crowds lining London's streets to pay their respects to a steady royal hand.

Prince Philip's body will not be taken to the British capital to lie in state at Westminster Hall like the Queen Mother's in 2002.

Instead, it will lie in rest at Windsor Castle until his funeral, and he'll be buried on the grounds of the Windsor estate.

When his funeral is held, the crowds again will be asked to stay away.

But Prince Philip will be given a military funeral in honour of his service to the Navy and the nation, and the country will pause.

There just won't be much fuss - just how he had wanted it. 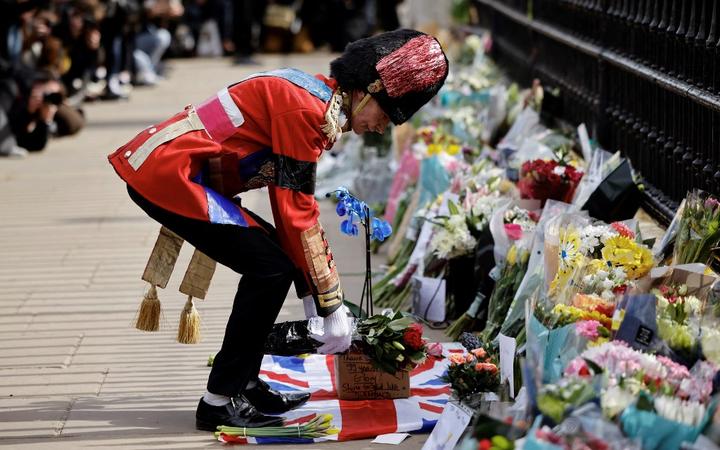 A fan of the Royal Family adds a tribute for Prince Philip outside Buckingham Palace in London. Photo: AFP 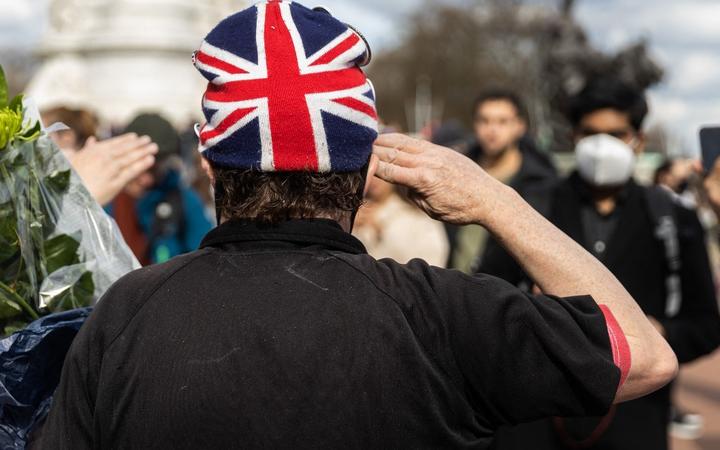 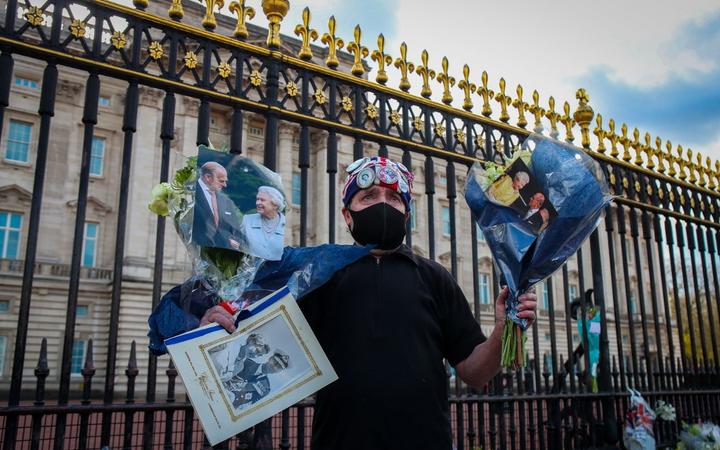 A supporter of the royals outside Buckingham Palace in London. Photo: AFP