Prince Philip's death at age 99 has been announced by Buckingham Palace, which turned its website to a darkened tribute to the Duke of Edinburgh. 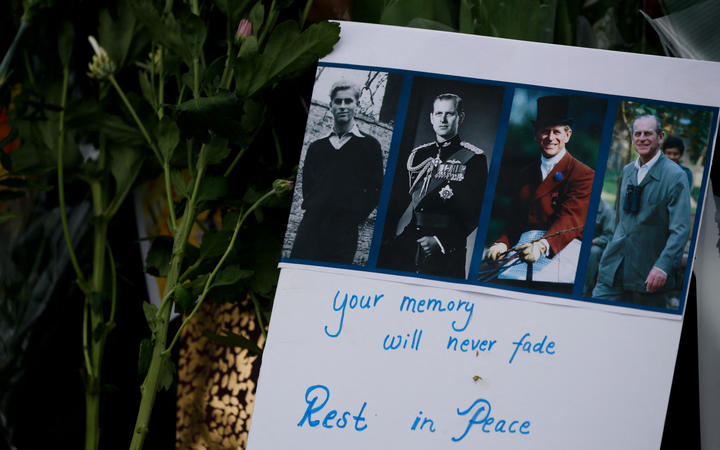 The announcement at 12pm local time left several hours until the front pages of British newspapers were published.

Here's how media around the world reacted online:

The BBC's front page features articles highlighting who Prince Philip was, world tributes, his life in pictures, as well as archival reporting on the marriage of Queen Elizabeth II and Prince Philip in 1947.

Headlines on The Times website include "Minimum fuss: the funeral Prince Philip wanted", "Young prince was a breath of fresh air in stuffy household" and "What now for the Queen without her stalwart at her side?" 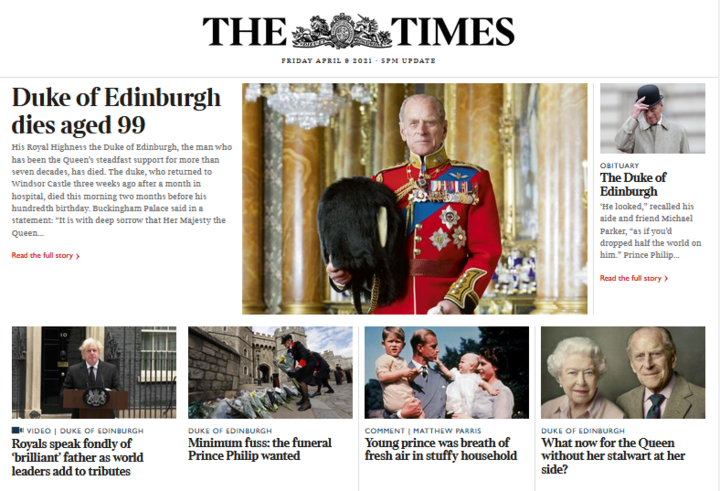 The Sun's website spoke of a nation's grief saying "We're all weeping with you Ma'am - Britain mourns death of Philip at 99". Another story highlighted that Prince Harry and Meghan Markle paid tribute to Prince Philip, saying "thank you for your service, you'll be greatly missed".

The Mail Online, the website of the tabloid Daily Mail, initially announced in striking capitals "PHILIP IS DEAD" showing a montage of photos of his wedding, one of him and the Queen in more recent years and one of Prince Philip as a young man. Hours later the top headline shifted to "Our father's legacy".

The Daily Mirror also had a montage of photos across time of Prince Philip and the Queen, initially stating "Prince Philip has died aged 99 at Windsor Castle as the Queen mourns loss of her 'strength and stay' and a nation grieves". Later in the day, it changed the headline to "United in grief". 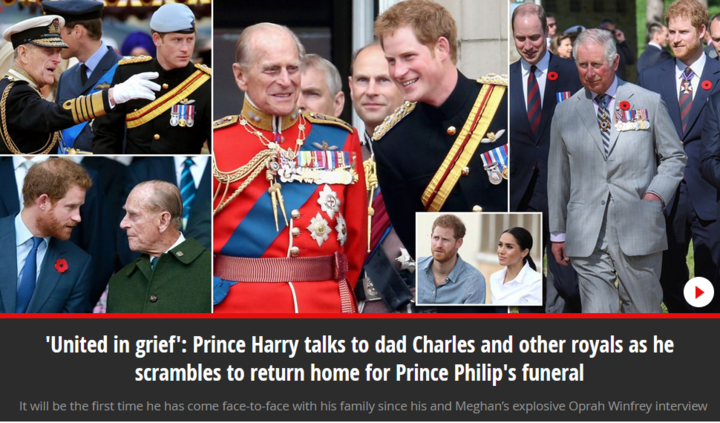 The Guardian marked the death with a feature sized photo of Prince Philip, with the headline "Prince Philip, Duke of Edinburgh and Queen's husband of 73 years, dies aged 99". But later, it moved to say "Queen and royal family mourn Prince Philip as tributes pour in".

Prince Philip's death took up half the front page of The Sydney Morning Herald, with the headline: "Queen's 'strength': Philip dies at 99".

But his death was much less prominent on the New York Times website, which ran a story towards the bottom of its front page.

Al Jazeera featured his death on the front page of its website, including an obituary and a follow up with a reaction piece later in the day.