Tens of thousands are marching against racism and police brutality in Washington DC, as protests sparked by George Floyd's death enter a 12th day. 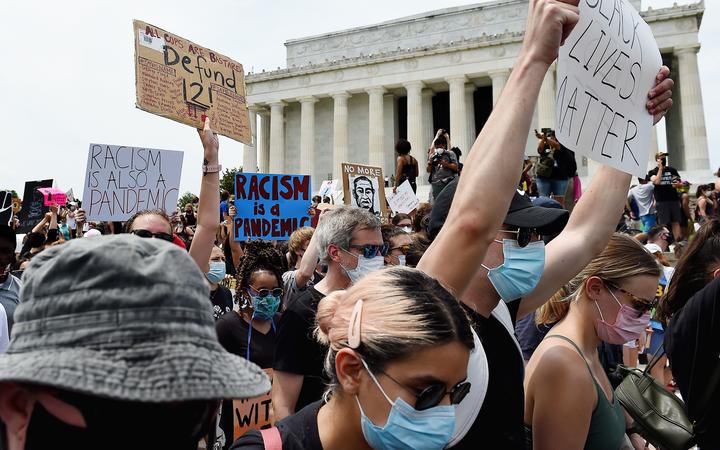 Demonstrators hold placards at the Lincoln Memorial during a peaceful protest against police brutality and racism. Photo: AFP

Crowds gathered near the Capitol, the Lincoln Memorial and Lafayette Park, where security forces blocked any approach to the nearby White House.

Meanwhile, people paid their respects to Floyd in North Carolina, where he was born, before a memorial service.

Large anti-racism rallies also took place in a number of other countries.

In the UK, Parliament Square in central London was filled with people supporting the Black Lives Matter movement, despite calls by the government to avoid mass gatherings for fear of spreading the coronavirus.

In Australia, there were major protests in the cities of Sydney, Melbourne and Brisbane that focused on the treatment of indigenous Australians.

Floyd, an unarmed black man, died after being arrested outside a shop.

Video footage showed a white police officer, Derek Chauvin, kneeling on Mr Floyd's neck for almost nine minutes while he is pinned to the floor. Floyd is heard repeatedly saying "I can't breathe".

What is planned in Washington?

In Washington DC, Mayor Muriel Bowser welcomed people gathered on a street near the White House that she renamed Black Lives Matter Plaza on Friday.

On Monday, federal law enforcement officers fired smoke grenades to clear a protest in the area ahead of a visit to a church by President Donald Trump.

Bowser said the crowds in the capital had sent a message to Trump.

"If he can take over Washington DC, he can come for any state, and none of us will be safe," she said. "So today, we pushed the army away from our city."

Bowser has requested the withdrawal of all federal law enforcement officers and National Guard troops from the city, saying their presence is "unnecessary". 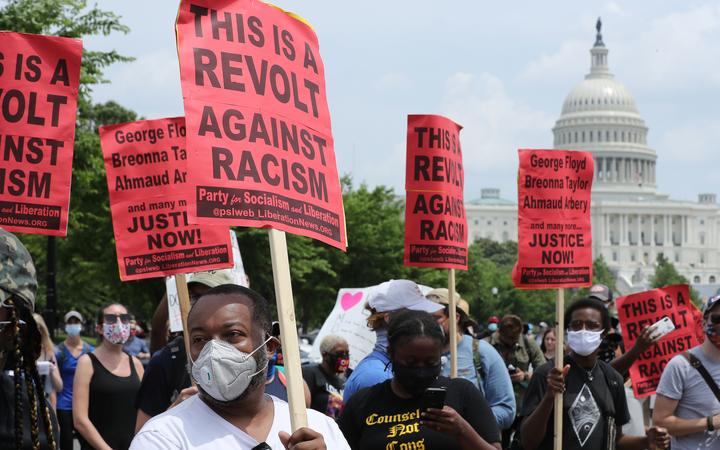 Demonstrators carrying signs gather near the U.S. Capitol during a protest against police brutality and racism. Photo: AFP / Getty

What's happening elsewhere in the US?

Hundreds of people paid their respects to Floyd in Raeford, North Carolina, laying flowers at a public viewing of his body in a church near where he was born.

A private memorial service was then held for members of his family.

North Carolina Governor Roy Cooper ordered that flags be flown at half-mast from sunrise to sunset on Saturday in Floyd's honour.

In Buffalo, two police officers were charged with second-degree assault after they were filmed pushing a 75-year-old protester to the ground, seriously injuring him.

The officers, who pleaded not guilty and were released without bail, were suspended without pay after footage of the incident went viral on Thursday.

The protester, Martin Gugino, remains in hospital in a serious but stable condition.

On Friday, the Minneapolis City Council and the Minnesota Department of Human Rights agreed to ban police neck restraints and chokeholds. California Governor Gavin Newsom also said he would move to end state police training in the use of the "carotid restraint".

Seattle's mayor, Carmen Best, banned the use by police of CS gas against protesters. And a federal judge in Denver ordered police to stop the use of tear gas, plastic bullets and other non-lethal force.

Meanwhile, the National Football League reversed its policy on protests against racial injustice by players during the national anthem. 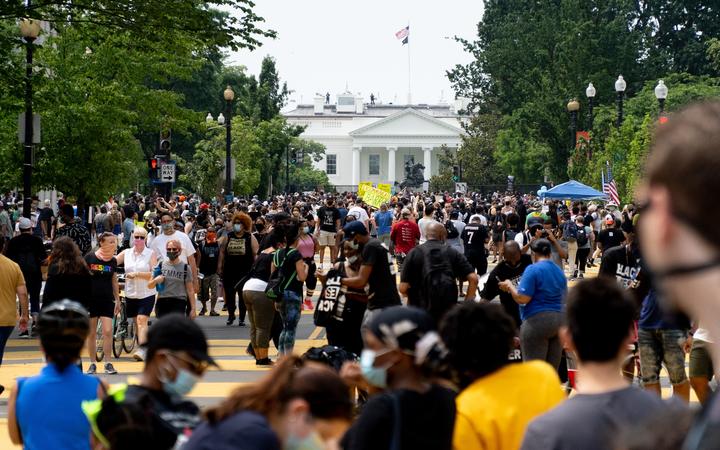 Protestors gather along 16th St north of the White House, speaking out against systemic inequality and police brutality. Photo: AFP

What do protesters want?

An end to police brutality is undoubtedly at the forefront of protests nationwide.

But it isn't the only concern. Repeated incidents of police brutality may have become the flashpoint, but issues with law enforcement are emblematic of the wider problem of systemic racism and inequality.

On social media and on the streets, those in support of the movement have called on elected officials to address these longstanding inequalities, from law enforcement to mass incarceration to healthcare.

Decades of government-sanctioned segregation have also seen inequalities across school systems, housing and other public resources.

As demonstrator Kyla Berges said: "The system has failed me for 300 plus years, so what do I have to do to make it change?"