A service to commemorate George Floyd has been held in Minneapolis, the city where he died at the hands of police. 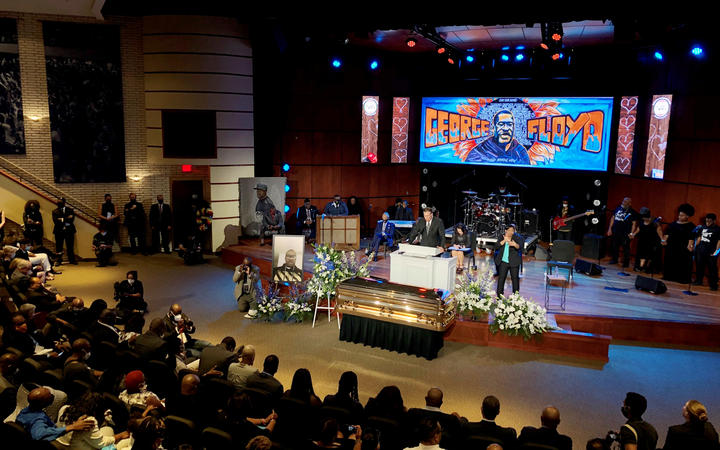 The memorial service for George Floyd at a chapel in the Minneapolis's North Central University. Photo: AFP

His death in police custody set off a nine days of protests across America. Services for Floyd are expected to stretch across six days and three states.

Philonise Floyd, George's brother, described him as someone everyone wanted to be around.

"George, he was like a general. Every day he walks outside there'd be a line of people - just like when we came in - who wanted to greet him and have fun with him."

He said people "felt like they were the president [when talking to George] because that's how he made you feel".

"He was a powerful man," Philonise said. "He had a way with words."

Floyd's youngest brother, Rodney, said he was "like a father figure" who taught his brothers how to be men.

'It's time for us to stand up in George's name'

In his eulogy, the Reverend Al Sharpton, a television political commentator and civil rights activist, said he went to the place where George Floyd died when he arrived in Minneapolis.

"When I stood at that spot, the reason it got to me because George Floyd's story has been the story of black folks. Ever since 401 years ago, the reason we could never be who we wanted and dreamed of being is you kept your knee on our neck," he said as the crowd applauded.

"It's time for us to stand up in George's name and say get your knee off our necks."

"The reason why we're marching all over the world is we were like George. We couldn't breathe - not because there was something wrong with our lungs, but because you wouldn't take your knee off our neck.

"We don't want no favours. Just get up off of us, and we can do and be whatever we can be."

Sharpton said George Floyd's death should be a turning point for the American justice system.

"This is the era to deal with policing and criminal justice. We need to go back to Washington and stand up - black, white, Latino, Arab - in the shadows of Lincoln and tell them this is the time to stop this." 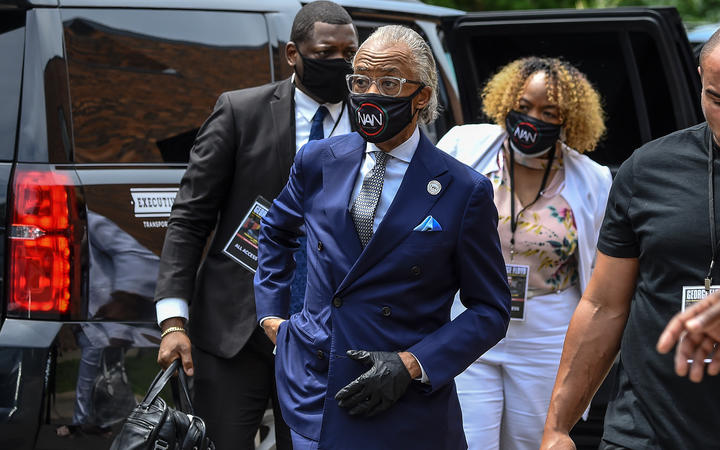 Family lawyer Benjamin Crump called on America not to co-operate with evil.

"The plea for justice is simply this," he said.

"Dr Martin Luther King said: he who passively accepts evil is as much involved in it as he who helps the person perpetrate it. He who accepts evil without protesting against it is really like co-operating with it.

"Protest against evil. Join the young people in the streets protesting against the evil, the inhumane, the torture that they witnessed on that video." 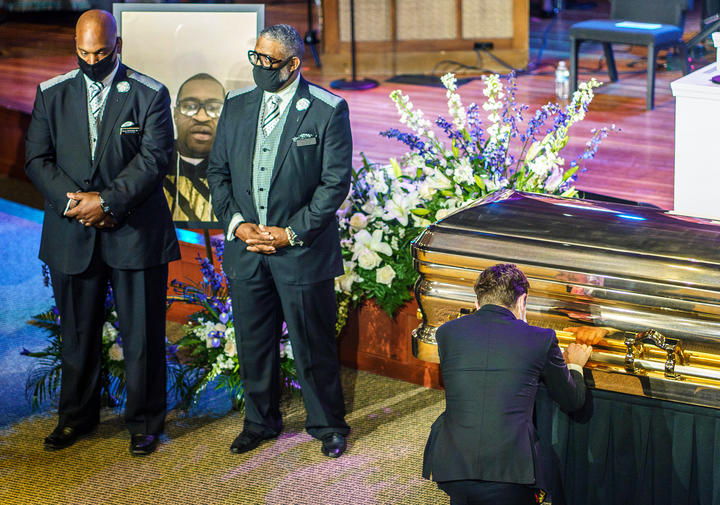 Before the service, Sharpton struck an optimistic tone, praising the unity of marchers protesting at police brutality. "I've seen more Americans of different races and of different ages, standing up together, marching together, raising their voices together," he told MSNBC. "We are at a turning point here."

Huge crowds have defied curfews and taken to the streets of cities across the country for nine nights in sometimes violent protests that prompted President Donald Trump to threaten to send in the military.

The protests dwindled overnight into Thursday after prosecutors leveled new charges against four former Minneapolis policemen implicated in the killing.

Several major cities scaled back or lifted curfews imposed for the past few days. But not all was calm.

In New York City's Brooklyn borough, police in riot gear charged into a crowd of about 1000 protesters defying a curfew, and US Attorney General William Barr said on Thursday that foreign interests and "extremist agitators" were taking over the protests.

Three Minneapolis police officers charged with aiding and abetting in the murder of Floyd made their first court appearances on Thursday.

Their bail was set at $1 million.

Derek Chauvin, the police officer who pinned his knee into Floyd's neck for nearly nine minutes and is charged with second-degree murder, did not appear in court on Thursday. He is due in court on 8 June.