Warning: The content in this story may be upsetting to some people.

There have been violent clashes between police and protesters in the US city of Minneapolis following the death of an unarmed black man in police custody. 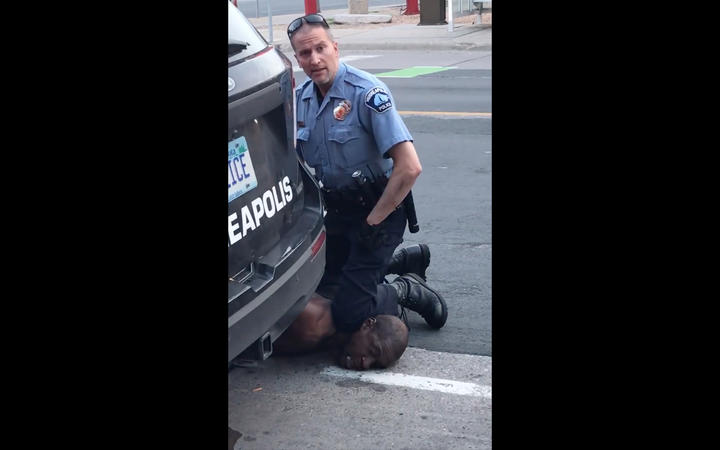 Video of the death shows George Floyd, 46, groaning "I can't breathe" as a white policeman kneels on his neck.

Four police officers have been fired, with the mayor saying that being black "should not be a death sentence".

The incident echoed that of Eric Garner, a black man who died being arrested in New York City in 2014.

The FBI has said it will investigate the Minneapolis incident, which took place on Monday evening.

On Tuesday afternoon, Mayor Jacob Frey confirmed the four officers involved in the incident had been "terminated".

"This is the right call," he tweeted.

At a press conference earlier, Frey had described the incident as "completely and utterly messed up".

"I believe what I saw and what I saw is wrong on every level," he said. "Being black in America should not be a death sentence."

It is the latest accusation of US police brutality against African Americans. Recent high-profile cases include an officer in Maryland who fatally shot a man inside a patrol car.

The incident in Minneapolis began with a report of a customer attempting to use a counterfeit $20 bill at a store.

The officers located the suspect in his car, police said in a statement. They were told the man, who has not been identified, was "sitting on top of a blue car and appeared to be under the influence".

After being ordered to step away from the vehicle, the man physically resisted officers, according to police. "Officers were able to get the suspect into handcuffs and noted he appeared to be suffering medical distress," the statement added.

In the 10-minute video filmed by a witness, the man is kept on the ground by the officer and, at one point, says: "Don't kill me."

Witnesses urged the officer to take his knee off the man's neck, noting that he was not moving. One says, "His nose is bleeding", while another pleads, "Get off his neck."

The man then appears motionless before he is put on a stretcher and into an ambulance. 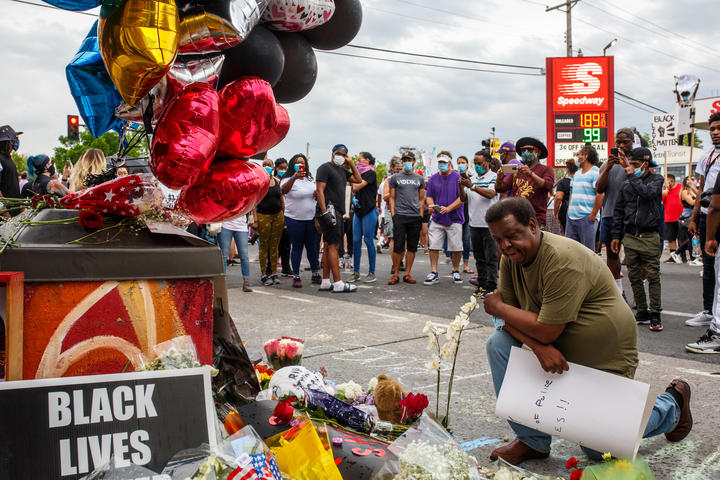 A man prays in front of a makeshift memorial in honour of George Floyd. Photo: AFP

Police said no weapons were used during the incident and that body camera footage had been handed to the Minnesota Bureau of Criminal Apprehension (BCA), which is investigating the case.

On Tuesday evening, officers used tear gas to disperse a mass protest outside a police precinct in Minneapolis, according to local media.

A journalist for the Star Tribune newspaper tweeted that he had been struck by a rubber bullet fired by police.

A reporter for local KTSP-TV tweeted that demonstrators had smashed glass at the precinct building and sprayed graffiti on a police patrol car.

Police said in a statement earlier about the death of George Floyd: "As additional information has been made available, it has been determined that the Federal Bureau of Investigation will be a part of this investigation."

Speaking to US media on Tuesday, Chief Arradondo said the force's policies "regarding placing someone under control" will be reviewed as part of the probe.

According to the Associated Press news agency, Minneapolis police officers are allowed under the department's use-of-force policy to kneel on a suspect's neck as long as they do not obstruct the airway.

Asked about the FBI's involvement, Chief Arradondo said he made the decision to include the agency after receiving "additional information" from a community source "that just provided more context".

In a statement, a spokesperson for the FBI Minneapolis division said the agency's investigation would focus on whether the police officers involved "wilfully deprived the individual of a right or privilege protected by the Constitution or laws of the United States".

When completed, the agency will present its findings to the Minnesota state's attorney for possible federal charges. The Minnesota BCA, which investigates most in-custody deaths, will continue to conduct its own investigation, focusing on possible violations of state laws.

Minnesota Senator Amy Klobuchar - who has reportedly been shortlisted as Democratic presidential candidate Joe Biden's running mate - issued a statement calling for a "complete and thorough outside investigation".

"I can't breathe" became a national rallying cry against police brutality in the US after the July 2014 death of Eric Garner.

Garner, an unarmed black man, uttered the phrase 11 times after being detained by police on suspicion of illegally selling loose cigarettes. They were the final words of the 43-year-old, who died after a police officer placed him in a chokehold.

A city medical examiner ruled the chokehold contributed to Garner's death. The New York City police officer involved in Garner's deadly arrest was fired from the police force more than five years later, in August 2019. No officer was charged in that case.

There have been violent clashes between police and protesters in Minneapolis following George Floyd's death.

They began in the afternoon on Tuesday, when hundreds of people came to the intersection where the incident had taken place on Monday evening.

Organisers tried to keep the protest peaceful and maintain coronavirus social distancing, with demonstrators chanting "I can't breathe," and "It could've been me".

Protester Anita Murray told the Washington Post: "It's scary to come down here in the middle of the pandemic, but how could I stay away?"

A crowd of hundreds later marched to the 3rd Precinct, where the officers involved in the death are thought to have worked.

One protester told CBS: "It's real ugly. The police have to understand that this is the climate they have created."

Another said: "I got on my knees and I put up a peace sign and they tear-gassed me."

Police said one person had suffered non-life-threatening injuries after being shot away from the protest area but gave no further details.