Thousands of people are protesting across Australia today to oppose the deaths of Indigenous people in police custody. 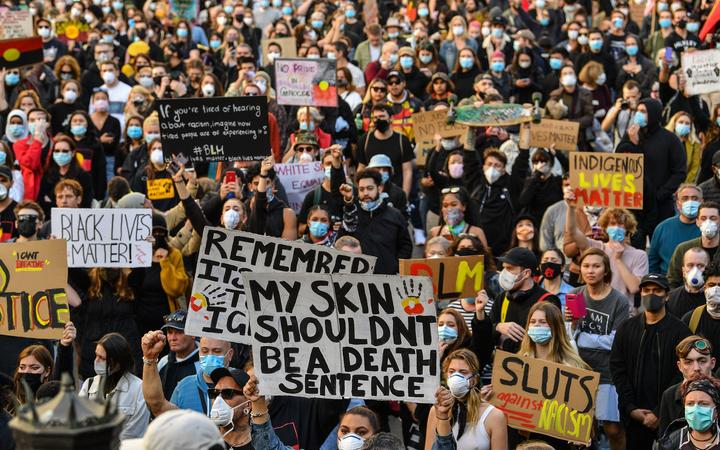 Thousands of people protesting in Sydney after the New South Wales Court of Appeal ruled in favour of a last-ditch attempt to lawfully authorise a Sydney protest. Photo: AFP

It comes as Black Lives Matter protests are held around the world after the death of George Floyd at the hands of a white police officer in the US state of Minneapolis.

Rallies kicked off in Brisbane and Adelaide, along with some regional centres, earlier today.

Big crowds have also gathered for protests in Melbourne and Sydney - after the New South Wales Court of Appeal ruled in favour of a last-ditch attempt to lawfully authorise a Sydney protest.

The decision means thousands of protesters marching in Sydney will be immune from prosecution for breaching public health orders.

Queensland Police estimate more than 10,000 people gathered in King George Square in Brisbane's CBD for the protest, which kicked off at 1.00pm.

It was organised by Warriors of the Aboriginal Resistance (WAR) to show solidarity with the uprisings in the United States and Australia's Aboriginal and Torres Strait Island people.

"All the people who have been oppressed, and exploited, and brutalised by the system and let us fight for a better world," the organisation said in a statement.

"First Nations people in Australia are the most incarcerated people in the world.

In Adelaide, it is estimated that thousands turned out to the rally held at Victoria Square in the CBD, with many people seen wearing face masks to protect against the spread of coronavirus.

Protesters marched along King William Street calling for an end to Aboriginal deaths in custody.

But an infectious diseases expert has warned it could lead to a surge in coronavirus cases. 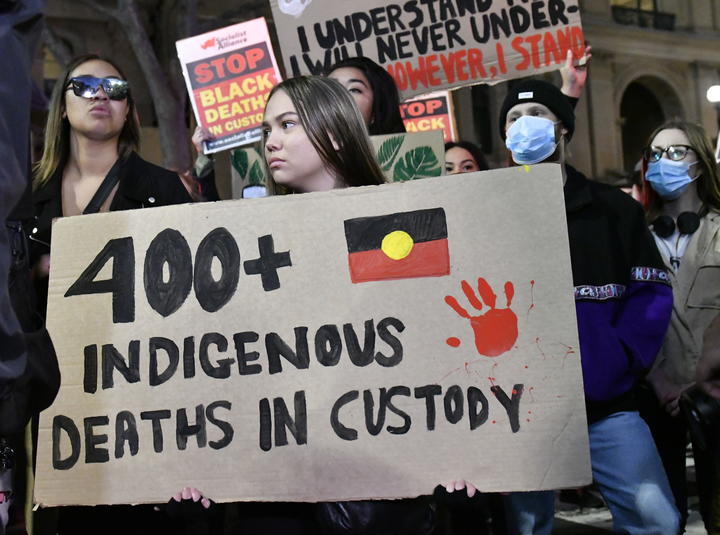 Australian National University professor Peter Collignon said people should take steps to protect themselves and others and adhere to social distancing.

He said "it might be a week or at least two weeks" until we see whether there has been an outbreak of cases linked to the protest gatherings.

About 1000 people also gathered in Townsville, North Queensland, this morning, for a peaceful rally to stand against black deaths in custody.

Young and old Aboriginal people, including Wulgurukaba people, spoke to the crowd about the racism and mistreatment of their people in Australia for generations.

Speakers said the death of George Floyd was the straw that broke the camel's back.

Thousands turn out in Melbourne as Sydney organisers fought ban

As the protest started to get underway in Melbourne, organisers asked the crowd to spread out along Bourke and Spring Streets to ensure there is social distancing.

Police yesterday warned organisers could be fined if coronavirus restrictions are breached.

A 20-person limit on outdoor gatherings still applies in Victoria, and Deputy Commissioner Shane Patton yesterday said organisers could be fined if the event breaks the Chief Health Officer's directives.

Premier Daniel Andrews and Chief Health Officer Brett Sutton are among those calling for people to call off the protests due to concerns of a spike in coronavirus cases.

Victoria Police officers were lined up along the lower steps of the Parliament building with police officers on horseback behind them.

A 16-year-old Koori girl, who is white and Aboriginal, said she had seen both sides of racism.

"Growing up, both Aboriginal and white, I'm a witness to the two sides of racism," she said.

She said it was more important to get her story out than to worry about her health.

"I think having my own voice put out there is so much more important than if I get coronavirus," she said.

Another protester, Greg, said he was born in 1955 and Aboriginal deaths in custody had been going on since well before that.

He said he was not "overly" concerned about his health.

"No one did anything about what happened to him."

The Victorian Aboriginal Community Controlled Health Organisation (VACCHO) has been handing out hand sanitiser, gloves and masks ahead of the Melbourne protest.

"I understand why people are still going to the protests," she told ABC News Breakfast.

She encouraged people who are sick, immunocompromised or in carer roles to stay away from the event and said she would not be attending herself as she was looking after family.

"But if you must go, stay safe, and the harm-minimisation approach is the way to go. I mean, in an ideal world we wouldn't want a George Floyd incident to happen in the middle of a pandemic," she said.

She said she did not think there was enough understanding of the "true history" of Australia.

"I hope it is a turning point. I really do," she said.

"Because all you've got to do is look at what happened over there [in the US]. That's not just because of George Floyd. That was the trigger. That was the last straw.

"They have had 500 years of brutality to African-Americans and you can see that and how it has manifested in their protests, the anger, the hurt and the frustrations. So, we have to deal with our past before we can move on."

WAR representatives released a list of 14 demands for the protest, including the dismantling of the policing and justice system and the implementation of all 339 recommendations from the Royal Commission into Aboriginal Deaths in Custody.